Courage, a Roman Catholic group that encourages gays and lesbians to live lifetimes of abstinence, is planning to hold its annual summit this month at the University of St. Mary of the Lake in Mundelein, Ill., which will include a speech by Fr. Paul Scalia. 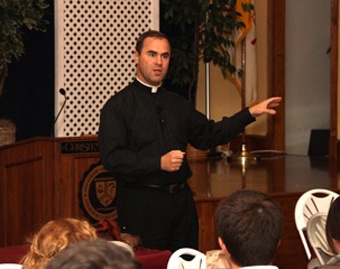 Paul Scalia is the son of Supreme Court Justice Antonin Scalia, and his involvement in Courage is well known.

The conference’s website lists Scalia as “the Chairman of the Board of Directors of the Courage apostolate” and says he will speak on “Fearing the Lord … and Not Being Afraid.”

Courage also points to an article Scalia wrote for the Fall 2012 edition of Humanum: Issues in Family, Culture & Science, in which he reviews three books authored by Courage founder Fr. John Harvey.

Scalia’s piece claims that critics of homosexuality are being silenced and mistreated, while in “this radical transformation of society, one of the greatest casualties is the individual who experiences homosexual attractions but who desires to live chastity.” He adds that it is unfortunate that Harvey used the term “homosexual person” since according to Scalia, those people do not exist: “We should not predicate “homosexual” of any person. That does a disservice to the dignity of the human person by collapsing personhood into sexual inclinations.”

After hailing Harvey for having eventually “ceased using the term “homosexual” or “homosexual person,” Scalia goes on to claim that many people have “have found freedom, to varying degrees, from homosexual attractions” and deny that people have sexual orientations: “Homosexual tendencies (to use a term from magisterial documents), do not constitute a fixed, unchangeable aspect of the person and therefore should not be considered an “orientation”…. Either our sexuality is oriented in a certain direction (i.e. toward the one-flesh union of marriage), or it is not.”

Consider how swiftly American society has changed as regards homosexuality. The “Stonewall riots,” the touchstone and unofficial beginning of the gay rights movement, occurred in June 1969. Since then, the demands from the gay community have progressed from simple tolerance, to acceptance, to the right to marry, to now the silencing of any opposition as bigoted and “homophobic.” Those who once insisted on tolerance for their lifestyle will now tolerate no disagreement. Society now requires everyone’s approval of what not long ago was regarded as morally abhorrent. 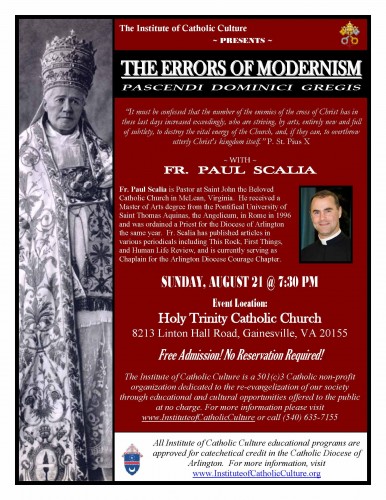 In this radical transformation of society, one of the greatest casualties is the individual who experiences homosexual attractions but who desires to live chastity. He finds, on one hand, the homosexual community encouraging him to live out his sexual desires, to claim his gay identity, to embrace the lifestyle, and so on. Worse, even some in the Church will encourage him to do so. Unfortunately, among those to whom he turns for help, he may find insensitivity, ignorance, misunderstanding, or simply an unwillingness to help. This individual is caught in the crossfire of the broader battle. He suffers great loneliness and often despair in the face of a struggle that some see as futile and others ignore.

In these books Father Harvey repeatedly articulates and explains the principle that guided his work and the work of Courage – namely, the distinction between the person and his homosexual attractions or tendencies. Those who advocate the goodness of homosexual acts and lifestyle do so because they identify the person – always a good – with the homosexual inclinations. They therefore conclude that such inclinations must be good and so also, of course, the actions. Likewise, those who feel shame and loneliness do so precisely because they have come to identify themselves (their very persons) with their same-sex attractions, which they know (both intellectually and affectively) to be wrong. The work of Courage (and of the Church as a whole) turns on the person/attraction distinction. We can fairly summarize that work as distinguishing the person to be loved from the attractions to be resisted and even overcome.

In this regard we must note the unfortunate title The Homosexual Person (and therefore also the unfortunate title of the CDF document). In short, we should not predicate “homosexual” of any person. That does a disservice to the dignity of the human person by collapsing personhood into sexual inclinations. The chronology of the books helps us to see the development in this area of language. Indeed, the Church is still trying to find the right vocabulary to speak about this modern phenomenon. Thus in his last book, Father Harvey ceased using the term “homosexual” or “homosexual person.” His thought and ministry brought him to realize that it is better to speak of someone with “same-sex attractions.” Although lacking brevity and ease of speech, this phrase has the virtue of precision. It acknowledges both the person/attraction distinction and the complexity of the condition – not fairly summarized as an “orientation.” Which brings us to another matter of vocabulary.…

Father Harvey’s use of the term “orientation” also underwent a deserved change. In his first two books we find the use of this word to describe homosexual inclinations or attractions. In the last book, however, he deliberately avoids it. This reflects the increased appreciation for the fact that homosexual tendencies (to use a term from magisterial documents), do not constitute a fixed, unchangeable aspect of the person and therefore should not be considered an “orientation.” Further, the term does violence to a proper understanding of human sexuality. Either our sexuality is oriented in a certain direction (i.e. toward the one-flesh union of marriage), or it is not. We cannot speak of more than one sexual “orientation” any more than we can think of the sun rising in more than one place (i.e. the orient).

Indeed, one of Father Harvey’s contributions is his discussion of the possibility for healing of homosexual attractions. He deftly navigates the extremes (on one hand, that change is impossible… on the other hand, that it is morally obligatory) to present the simple truth that many have found freedom, to varying degrees, from homosexual attractions. Thus we cannot speak of it as a fixed, unchangeable, unchanging “orientation.” (For this reason also the Church made a similar correction in the second edition of the Catechism, removing unfortunate language that implied homosexuality is a fixed orientation.)