Jesus, what a headline grabbin’ fool!

Bishop Harry Jackson claims that same-sex marriage will lead to “terrible suffering” for children, who will inevitably “turn to lives of crime and violence.” Say, bishop, what caused all the crime and violence before the DOMA repeal? Sheesh!

Lost in the never-ending push to redefine marriage are those who suffer most when they are denied the benefit of a traditional marriage. Children need both a mother and a father far more than any adult needs societal approval of a romantic relationship. And although American children may, for the most part, have food, shelter and education, too many are denied this most basic need. According to the most recent US Census, a third of American children live apart from their biological fathers. For African American children, it is nearly two thirds. 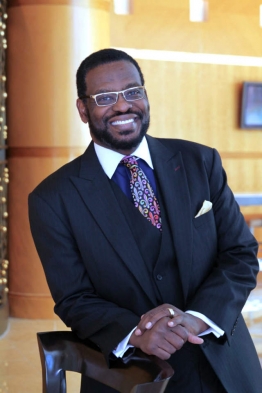 I have written a great deal, along with many others, about the terrible consequences of father abandonment for children. Children who grow up without their fathers are more likely to be poor, use drugs, commit crimes, drop out of school and commit suicide. But behind these statistics are millions of individual human stories of intense pain. The marriage debate has become so focused on the desires and demands of various groups of adults that we have forgotten the legitimate needs and terrible suffering of children.

An absent father leaves a deep wound in the heart of his child. Writing in the magazine Essence, singer VaShawn Mitchell spoke for millions when he admitted, “As I approach 35, I still have many unanswered questions about my biological father and the reasons it took me nearly 30 years to realize that I had to forgive him and move forward. I had questions like… What man would have a son and not want to be a part of his life?”

Mitchell’s unanswered question goes to the heart of fatherlessness: the child who grows up feeling constantly rejected by the man who should have been his provider and protector. Critics of the traditional family have long sought to convince us that the gender of a parent is irrelevant: boys can learn to be men even if they are raised by two “mommies,” and girls do not need their biological fathers in their lives to have healthy relationships with men in the future.

Artists and authors have told a different tale for millennia. The longing of the abandoned child for his or her father has been a theme in literature since at least 1200 BC, when Homer told of Telemachus’ ache to know his father Odysseus. More recently, Maya Angelou described the occasional visits from her biological father in I Know Why the Caged Bird Sings. “Daddy Baily visited occasionally, bringing shopping bags full of fruit. He is shown like a Sun God, benignly warming and brightening his dark subjects.”

Multiple studies confirm that children abandoned by their fathers often report feelings of rage and shame. As adults, they tend to have difficulty trusting others and struggle with fearing abandonment in their relationships. Rapper Lecrae expresses a young boy’s yearning for his father in his song, “Just Like You.” He notes the reason so many fatherless boys fall into making poor life decisions:

So now I’m looking at the media and following what they feed me,
Rap stars, trap stars, whoever wants to lead me
Even though they lie, they still tell me that they love me,
They say I’m good at bad things at least they proud of me

Is it any wonder that young boys turn to lives of crime and violence, when the purveyors of such lifestyles are the only men to show them any real attention? It is about as surprising as a starving child attempting to steal bread. And no social policy that fails to take into account the deep and legitimate need that every child has for both a mother and a father can ever be considered fair or just.

What does the internal aching so many children have for their missing fathers have to do with how marriage is legally defined? Advocates of redefining marriage constantly scoff at the notion that their policy goals could have a negative effect on anyone. “How does the legal union of two homosexual men affect your marriage?” they ask mockingly.

And of course the debate has nothing to do with my marriage or yours. It has to do with how future generations of adults will approach the very idea of marriage and parenthood. We already have nearly two decades of social experimentation in Scandinavia to draw upon. And it tells us that the broader the definition of marriage is the fewer adults bother with it in the first place. Since legalizing registered partnerships and gay marriage in Scandinavia, an overwhelming number of adults have simply stopped bothering to get married in the first place.

As I have pointed out many times before, words that mean everything, mean nothing. The looser we make the definition of marriage, the fewer people will feel bound to its obligations and constraints. And while broken relationships can hurt adults, they can destroy children.

One Reply to “Wounds of This Generation Can Harm Children”