When the outspoken Polish priest Wojciech Lemanski returned with his parishioners to his church near Warsaw after holding a prayer vigil at the Treblinka Nazi death camp in early July, a dismissal notice awaited him. 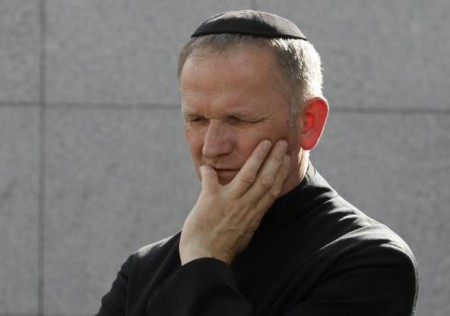 The Warsaw diocese of the Roman Catholic Church sacked Lemanski as parish priest in the small village of Jasienica for what it said was his insubordination after numerous clashes on issues such as in-vitro fertilization, abortion and his engagement with the Jewish community.

Lemanski sealed his fate when in a radio interview he accused Archbishop Henryk Hoser, who oversees his parish, of asking whether he was a Jew and circumcised – a charge the diocese has denied.

The episode exposed a rift within the church, as it struggles to retain a central role in Polish life, between conservatives and those who want more openness in dealing with social issues and some of the darker episodes in Poland’s past.

“At a time when Pope Francis is calling for open-mindedness, the church in Poland is crawling into its shell,” said Iwona Jakubowska-Branicka, a sociologist at Warsaw University.

“As with many moral issues, the question of relations with Jews has been swept under the carpet,” she said.

Relations with the Jewish community are an especially difficult subject in Poland, where millions of Jews perished in the Holocaust during the Nazi German occupation of the country.

Most of those who survived were forced to leave in the late 1960s by the communist regime. Poland’s post-communist leaders have condemned the “anti-Zionist campaign” of that time and have often spoken out against other signs of anti-Semitism.

Poles have celebrated those compatriots who helped to save local Jews in World War Two, but they have also downplayed events such as the burning of 340 Jews by Polish peasants in the village of Jedwabne in 1943.

The episode was buried by the communist authorities after the war and resurfaced only after a 2001 book written by Polish-born U.S. historian Jan Gross described the massacre.

The publication was criticized by some Catholic church leaders as stoking anti-Polish and anti-Jewish sentiments, but the subsequent debate inspired young Lemanski to work on improving the dialogue between the two groups.

“God knocked on my door and said he wanted something more from me. I can’t imagine being a priest without a special sensitivity for the Jews, their tragedies and a need for dialogue,” the priest said in an interview.

Lemanski is among a few Catholic priests who commemorate the massacre each year with Jewish leaders and holds prayer vigils at the Treblinka camp, one of the infamous Nazi death factories where Jews, along with Poles and others, were gassed.

He also recovered gravestones from abandoned and destroyed Jewish cemeteries, incorporating two of them into the main alter of his church. That move stoked charges from some conservative Catholics that he was turning it into a synagogue.

In a statement explaining its decision to send Lemanski on early retirement, the Warsaw Diocese did not refer to the gravestones, but said he had failed to get church permission on issues related to the parish.

The diocese also said Archbishop Hoser’s relations with the Jewish community were “proper and full of trust”.

Jewish community leaders have avoided being pulled into the affair, but some have expressed support for Lemanski’s efforts.

“I can say one thing: looking at the way parishioners treat the priest, I think that if the Jewish community had had a rabbi like Lemanski, the community would have been very pleased,” said Piotr Kadlcik, head of the Union of Jewish Religious Communities in Poland.

Despite being sidelined by his superiors, Lemanski said he would remain active after lodging an appeal with the Vatican.

“I realize it’s not an easy path but I don’t feel like someone on the margin of the church. On the contrary, I feel like I’m in the centre of my church because without this dialogue our church loses its authority,” he said.