Pope Francis has approved the creation of a tribunal to hear cases of bishops accused of covering up child abuse by paedophile priests. 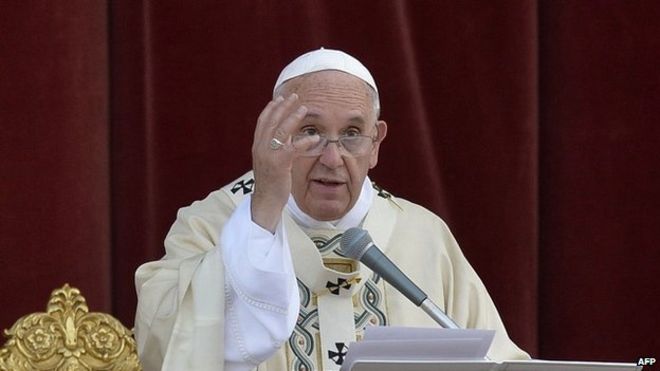 The unprecedented move followed a recommendation from the Pope’s newly created panel on clerical sex abuse.

The tribunal will have the power to punish bishops who failed to protect young victims.

Survivors’ groups have long called for the Vatican to do more to make bishops accountable for abuse on their watch.

Last year, the UN strongly criticised the Church for failing to stamp out abuse and for allowing cover-ups.

A statement from the Vatican said the department would come under the auspices of the Congregation for the Doctrine of the Faith.

Its aim would be “to judge bishops with regard to crimes of the abuse of office when connected to the abuse of minors”, the statement added.

•Germany – A priest, named only as Andreas L, admitted in 2012 to 280 counts of sexual abuse involving three boys over a decade

•Belgium – The bishop of Bruges, Roger Vangheluwe, resigned in April 2010 after admitting that he had sexually abused a boy for years

Father Federico Lombardi, a Vatican spokesman, said bishops could also be judged if they had failed to prevent abuse from taking place.

Initially the complaints would be investigated by one of three Vatican departments, depending on whose jurisdiction the bishops were under.

They would then be judged by the doctrinal department.

Gabrielle Shaw, chief executive of the UK’s National Association for People Abused in Childhood (NAPAC), said the move was good news for victims.

“We would welcome anything which looks closely at clerical abuse and shows more openness from the Church,” she added.

NAPAC’s founder Peter Saunders is part of the Vatican advisory commission which recommended the step.

The panel was set up by Pope Francis in 2013 to help dioceses improve abuse prevention measures and support victims. It is made up of 17 clerics and lay people from around the world.
Complete Article HERE!