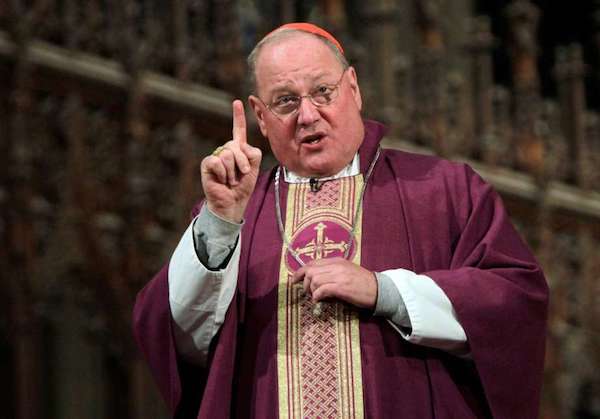 Cardinal Timothy Dolan, archbishop of New York since 2009, will speak at the University of St. Thomas in Montrose’s May commencement ceremony despite student calls for the university to reconsider.

A petition calling for the university to cancel the speech brought 100 signatures in the last several days.

University President Robert Ivany said Thursday morning that he does not believe the critical view reflects the general campus opinion. The university’s governing board of directors selected Dolan to speak two years ago in a unanimous decision, he said.

Ivany, who will step down after this semester, plans to meet with graduate student Christina Cochran on Monday to discuss her concerns, he said.

A small group of students is “outraged” by the selection, Cochran said by phone Wednesday.

“In my opinion, this student does not reflect in any way shape or form the attitude of the students of St. Thomas,” he said. He said he will listen to her concerns but that Dolan will speak at commencement.

Before taking his current position in New York, Dolan was archbishop of Milwaukee.

There, priests accused of pedophilia were paid up to $20,000 for agreeing to be removed from the clergy under Dolan’s leadership.

“Was it a payoff, was it a settlement, was it an impetus, I wouldn’t say that, nor would I say it was a normal practice, but it was done,” he said in a 2012 deposition about the payments, which he later said were to help accused priests transition out of their roles and get medical insurance.

He said that people in favor of same-sex marriage were “bullying” the church in a 2011 interview with the National Catholic Register, an arm of the Catholic Eternal Word Television Network. “You think it’s going to stop with this? You think now bigamists are going to want their rights to marry? You think somebody that wants to marry his sister is going to now say ‘I have a right’? I mean, it’s the same principle, isn’t it?”

Ordained to the priesthood in 1976, Dolan has served in Missouri, Washington, D.C. and Rome. He had a prominent role in President Donald Trump’s inauguration, leading the nation in prayer from the Capitol moments before Trump took office.

He was appointed to the College of Cardinals by Pope Benedict XVI in 2012. Dolan promoted a voluntary compensation program for priest abuse victims last year in an effort to bring healing and closure.

The university announced Dolan’s speech, which will take place at NRG Arena on May 20, last week in a news release.

“He has brought the truth of the Gospel to countless men and women through his joyful personality, quick wit and his popular homilies at St. Patrick’s Cathedral in New York City,” Ivany said in a statement. “Cardinal Dolan’s insights and enthusiasm for our faith and for the dignity of all will find an appreciative audience in our dedicated graduates.”