‘Why shouldn’t we pray for gender equality in the Church? It is most important that all discussions on reform be offered up to God,’ says Sister Ruth Schönenberger 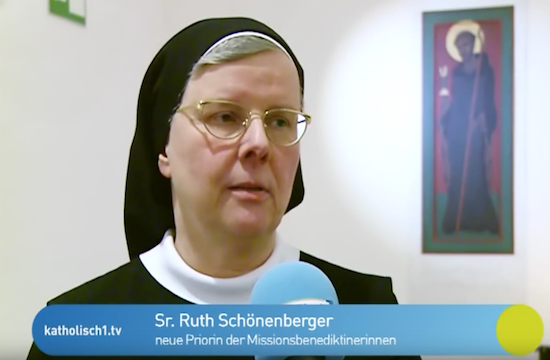 The leader of one of Germany’s most important female religious communities has called into question the Catholic Church’s exclusion of women from the ordained priesthood.

“It is surely only natural for women to be priests and I cannot understand the reasons given as to why not,” said Sister Ruth Schönenberger, head of the Benedictine Priory of Tutzing, the Bavarian motherhouse of a worldwide missionary order.

“I am surprised that the presence of Christ has been reduced to the male sex,” she said in a recent interview with katholisch.de, the official website of the German Catholic Church.

“Here in Tutzing, we, too, have excellently qualified women theologians. The only thing they lack is ordination – nothing else,” said 68-year-old Schönenberger, prioress of Tutzing since 2015.

The priory is one of the most important in the Benedictine world. In 1885 it founded the Missionary Benedictine Sisters of Tutzing, a congregation that today numbers some 1,300 sisters in 19 countries around the world.

Priesthood should not be based on gender

Schönenberger, who is responsible for the 70 members at the Tutzing priory and those at two other Benedictine convents, said the criteria for priesthood should not be based on one’s gender.

“Our present image/concept of the priesthood urgently needs to be fundamentally revised and I am genuinely surprised that priests themselves don’t protest more against present developments since they involve them,” said the prioress, noting that men and women should be treated as equals.

“The extent to which this power imbalance exists the world over is truly alarming and so is the fact that we have not learned to grapple with it more effectively. It is something we must rigorously tackle,” Schönenberger said.

She called for greater and open discussion on the issue to look for concrete steps that could be taken to remedy the imbalance “and not just comfort us women somehow – as, for example, by promising to look into the question of women deacons.”

Schönenberger said she and her fellow sisters often discuss the subject.

“After all, we experience concrete examples of subordination day after day. If we, as a group of women religious, want to celebrate the Eucharist together, we have to arrange for a man to come and celebrate it, every single day. He stands at the altar and leads the celebration. We are not allowed to,” the Tutzing prioress said.

“We intend to look for forms (of celebrating the Eucharist) which suit us and develop new ones,” she added.

Worldwide prayers for gender equality in the Church

She said she and her community fully supported the prayer initiative for gender equality in the Church that was launched in February by Sister Irene Gassman, prioress of the Benedictine Monastery of Fahr (Switzerland).

The Swiss religious has invited Benedictine communities around the globe — as well as parishes and other communities — to include the “Prayer on Thursday” during compline (or night prayer) each week.

Schönenberger said prayer alone was not enough, but added: “Why shouldn’t we pray for gender equality in the Church? It is most important that all discussions on reform be offered up to God.”