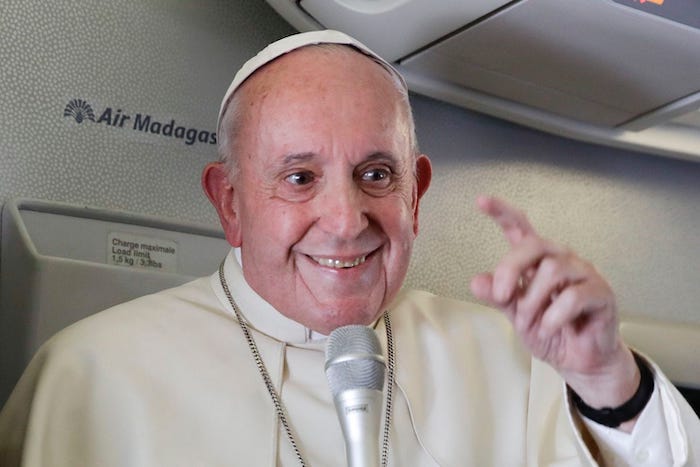 Pope Francis urged caution on Monday in the “interpretation” of a damning report into child sexual abuse by French Catholic clergy, saying a “historical situation” must be viewed in context.

A landmark inquiry overseen by an independent commission confirmed in October extensive sexual abuse of minors by priests in France dating from the 1950s to 2020.

“When we do this kind of study, we must be attentive to the interpretation we make of it,” the 84-year-old pontiff told reporters onboard his flight back from a trip to Greece.

“Abuse 100 years ago, 70 years ago, was brutality. But the way it was experienced is not the same as today,” he said.

“For example, in the case of abuse in the church, the attitude was to cover it up — an attitude that unfortunately still exists today in a large number of families.”

He added that the “historical situation” must be interpreted by the standards of the time.
The pope, who after the publication of the report expressed his “shame”, revealed he had not read it himself but would discuss it with French bishops when they visited him later this month.

Dealing with the avalanche of revelations about sexual abuse by priests was one of the biggest challenges that Francis faced when he was elected pope in 2013. Francois Devaux, head of a victims’ association in France, expressed incredulity at the pope’s “distressing” lack of interest in the French inquiry.

“This will show everyone that the pope is at the heart of the problem,” Devaux told AFP, labelling his comments as “ignorance, stupidity and denial”.

The pope also condemned the “injustice” of the recent resignation of Michel Aupetit, the archbishop of Paris.
Aupetit, 70, quit following media reports of an intimate relationship with a woman, which he had categorically denied. A diocese spokeswoman said at the time that “he had ambiguous behaviour with a person he was very close to”, adding that it was “not a loving relationship”, nor sexual.

“When the gossip grows, grows, grows and takes away the reputation of a person, that man will not be able to govern… and that is an injustice,” Francis said.

“I ask myself, what did Aupetit do that was so serious he had to resign? If we don’t know the accusation, we cannot condemn,” the pope added, urging journalists to investigate.

He said Aupetit had been condemned by “public opinion, rumours. But what did he do? We know nothing”.

However, the pope referenced a breach of the sixth commandment — a ban on adultery — saying it was “not total, but little caresses and massages he gave to his secretary”.
“That is a sin. But it is not the most serious because sins of the flesh are not the most serious,” he said.

He added: “Aupetit is a sinner. As I am, as was Peter, the bishop on whom Christ founded his Church.”

In a statement last week, when the pope accepted his offer, Aupetit said he wanted to “protect the diocese from the division that always provokes suspicion and the loss of confidence”.