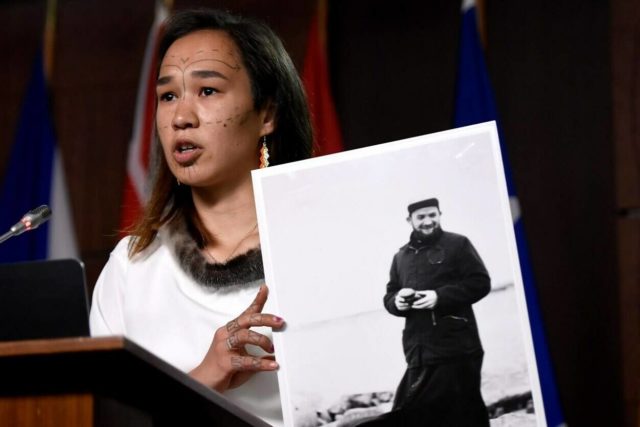 Mounties have laid a new charge against a Roman Catholic priest who has previously avoided trial for multiple allegations of sexual abuse linked to his time in Nunavut.

RCMP said a Canada-wide arrest warrant has been issued for Johannes Rivoire, who is in his 90s and lives in Lyon, France.

“It’s about time,” Piita Irniq, an Inuit elder who has been fighting for more than a decade to have Rivoire returned to Canada, said Tuesday from Ottawa.

Mounties said Rivoire was charged last month with sexual assault on a female.

The latest development in the investigation of the Oblate priest comes after the leader of the national organization representing the Inuit asked Pope Francis to intervene in the case during a meeting at the Vatican on Monday.

Natan Obed, president of Inuit Tapiriit Kanatami, said he asked the Pope to “speak with Father Rivoire directly and ask him to go to Canada to face the charges.” Obed also asked the Pope to request that France step in if Rivoire is not receptive.

A warrant was issued for his arrest in 1998. He faced at least three charges of sexual abuse in the Nunavut communities of Arviat, Rankin Inlet and Naujaat. More than two decades later, the charges were stayed.

The Public Prosecution Service of Canada said at the time it was partly due to France’s reluctance to extradite.

Inuit leaders and politicians from senators to Nunavut premiers have continued to urge that the priest face trial. Those calls have grown with the discovery of unmarked graves at the sites of former residential schools run by the Catholic Church.

Bishop William McGrattan, vice-president of the Canadian Conference of Catholic Bishops, said Monday that “justice and truth are important in this path of reconciliation.” He said Pope Francis heard that bringing the priest to Canada to face justice is important.

“The church wants to work with the relevant justice authorities, whether they be international or Canadian,” he said.

“And if there are allegations that someone has committed these abuses, that they need to be brought to justice and the church should not stand in their way but assist those who have been victims to seek justice and healing.”

The Missionary Oblates of Mary Immaculate, the order of which Rivoire was a member, has invited Obed for a meeting at its office in Rome on Thursday to discuss the case.

Irniq said there are at least six Inuit still living who allege Rivoire abused them. Word of the new charge is spreading quickly, he said.

“They’re happy that things are moving along,” he said. “There’s been a lot of press and a lot of talk, so I think the people I’ve talked to are very hopeful.

Marius Tungilik was Irniq’s childhood friend and comrade in the struggle for Inuit self-determination. Tungilik, who died in 2012, claimed he was abused by Rivoire and was among the first Inuit to speak out about what he had suffered at residential school.

Irniq said his long fight to have Rivoire extradited was fuelled by the desire to see justice for his old friend.

“I kind of made a promise to Marius that one day I would I do something to make this happen.

“Marius would say the same thing I did,” Irniq said. “Finally. It’s about time.”