The news that an American bishop had been charged with failing to report child abuse should have been collosal news in the Vatican. 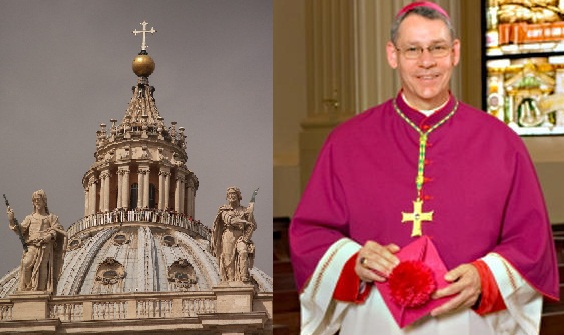 But the response has been as if the case is far away and far removed from the Holy See — and the Papacy that is so quick to come down on questions of celibacy, women priests and the rights of gay Catholics appears to regard the American scandal, involving a priest and what seems to be child pornography, as a matter for local jurisprudence.

On last Friday, prosecutors in Kansas City, Missouri, secured an indictment from a grand jury that alleges Bishop Robert Finn neglected to inform the police for months after discovering “hundreds of disturbing images of children” on a priest’s laptop in December 2010, including photographs focused on the crotch, upskirt pictures and at least one image of a child’s naked vagina.

The offending priest — Shawn Ratigan — was relieved of his position as a church pastor and transferred to a convent, but neither the police, his parishioners, nor the parents of a nearby Catholic school were informed of the pictures until May 2011.

In the interim, Ratigan continued to attend events involving children, including birthday parties and a first communion, and allegedly attempted to take lewd pictures of a 12-year-old girl. Finn and Ratigan have both pleaded not guilty to the charges against them.

The case against Finn marks the first time a bishop in the United States has been indicted for failing to report abuse by a priest under his supervision. It comes nearly 10 years after the U.S. Conference of Catholic Bishops adopted policy mandating that dioceses report allegations of sexual abuse to the public authorities and seven months after the Vatican urged all bishops across the world to institute similar measures.

It also comes three years after a $10 million settlement in Kansas City with 47 plaintiffs alleging abuse at the hands of priests, in which Bishop Finn agreed to immediately inform the police of any suspicion of sexual abuse by members of his diocese. However, when the Vatican was contacted for comment, regarding the allegations, it demurred, citing the pending charges.

“There is a legal procedure under way,” the Vatican’s spokesperson Father Federico Lombardi told a reporter for the AFP. “Any intervention could be interpreted as interference.”

The Vatican’s tepid response highlights a chasm between the public perception of the way the church is organized and the structure by which it usually operates. While most outsiders imagine the Catholic Church as a monolithic hierarchy, with a direct line of command from the Pope down to most junior priest, for many inside its ranks the better analogy is a community, in which the Vatican plays a coordinating role for a host of almost completely independent dioceses.

“The church doesn’t work at all like a centralized machine, in that a command that comes from above is automatically communicated to the parts of the machine below,” says Sandro Magister, editor of the Rome-based website Chiesa (Italian for “church”). “The autonomy of single bishops is very strong.”

Thus, while an outside observer might draw a line of accountability directly to Rome, from the Vatican’s point of view responsibility for a sex abuse scandal would more traditionally lie at the local level. Indeed, in other cases, lawyers for the church have explicitly argued that bishops don’t work directly or the Vatican.

But, under Pope Benedict XVI, the Vatican has nonetheless begun to ratchet up the pressure, according to Phil Lawler, editor of CatholicCulture.org, and a long-time critic of the Church’s slow response to the 25-year-old sex abuse scandal.

“The Vatican is gradually getting a grip on it, if not in this country, in others,” he says.

In Ireland, for instance, the church forced the resignation of three bishops who failed to report abuse by priests.

“I think you’re starting to see steadily more active supervision,” says Lawler, adding that the Vatican would nonetheless likely continue to have a largely hands off approach. “The autonomy of bishops isn’t going to away,” he says. “That’s fundamental to the structure of the church.”

Yet for the victims of the abusive priests, it’s not an argument that has much resonance. After all, when a priest advocates ending the tradition of celibacy or in favor of the ordination of women, the Vatican is quick to clamp down.

“Rome does have a direct influence on diocese around the country and around the world,” says Michael Hunter, the Kansas City director for the Survivors Network of those Abused by Priests (SNAP) who has filed a new lawsuit against Finn for breach of contract, alleging that the bishop failed to live up to the terms of the earlier settlement.

“The Vatican really could and should come down on the moral side of this and really chastise this diocese,” he adds.

“And the heck with the legal issues.”