Fourteen Delaware men who said they were sexually assaulted as children have reached a $7 million settlement with three Catholic church institutions, sparked by the state’s sexual abuse law, two of the victims announced on Thursday. 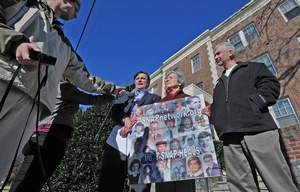 Matthias Conaty and Jeff Rose, who say they were abused in the late 1970s and early 1980s, announced the settlement outside the Roman Catholic Diocese of Wilmington.

In February, the diocese paid a $77.4 million settlement to 146 victims of sexual abuse, forcing it to declare bankruptcy.

“It’s been a painful day, but in some ways it’s a day of triumph,” Conaty, 43, who wore a chain around his neck with a picture of himself from the period of abuse. “The voice I couldn’t use as a little boy was found.”

Former Capuchin Daleo told Conaty he loved him and subjected him to “every form of abuse,” Conaty said.

No one answered the telephone at Daleo’s home in Jersey City, New Jersey. Reached at his home in Pennsylvania, former lay teacher Fleming asked how much money the case was settled for and declined to comment further.

During the news conference Rose, 42, who says Fleming abused him in 1983, felt ill and had to be aided by others.

“It’s been pretty emotional,” he said. “I’ve kept it to myself for a long time.”

According to the Survivor Network of those Abused by Priests, an advocacy group, the settlement the Delaware settlement reached on Thursday was reached with institutions that hired and supervised the predators.

The institutions are New Jersey-based Capuchin Franciscan Province of the Sacred Stigmata of St. Francis, St. Edmond’s and the order that runs it, the Brothers of the Holy Cross of the Eastern Province of the United States of America Inc.

Conaty, who works in marketing, founded Child Victims Voice, an advocacy organization, and encouraged Delaware legislators to adopt the Child Victim’s Act of 2007.

A similar window to report sexual abuse is being considered in other states, including Pennsylvania, where the Penn State scandal will hopefully influence its passing, Conaty said.

At Penn State, Jerry Sandusky, longtime former assistant to legendary football coach Joe Paterno, has been charged with sexually abusing eight boys over more than a decade. The case forced the firing of Paterno and the university president.

Under this settlement, the Capuchins and Saint Edmond’s must release documents outlining the “black-and-white, gory details” of the abuse and any cover-up, Conaty said.

James Green, an attorney for Saint Edmond’s, said complaints against Fleming in 1984 led to his termination. Fleming is now a registered sex offender.

Daleo left the school around the same time and there have been no allegations of abuse since then, Green said.

“Two people have ever been complained about in the history of Saint Edmond’s — Daleo and Fleming,” Green said in a telephone interview.

“There will be nothing else” in the documents, he added.

Nick Mormando, the newly elected provincial minister for the Capuchins, said by telephone: “I apologize to the victims and families that went through a lot of pain and suffering. I hope this brings peace.”

Calls to the Brothers of the Holy Cross were not returned.