For the first time ever, the Roman Catholic church is endorsing civil unions, announcing its second historic reversal in only two weeks. 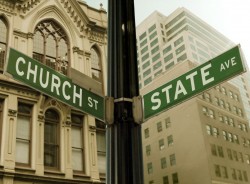 Historically, Roman Catholic officials have opposed virtually every regulation, policy, and law proposed to protect LGBT people nationwide, including all proposals for civil unions. However, faced with the choice of either retaining New Hampshire’s full marriage law which was signed on 3 June 2009, or else repealing it and replacing it with civil unions instead, church officials decided – for the first time ever – to endorse civil unions for LGBT people.

In a statement issued on March 19, church officials claimed that they are endorsing civil unions only in an attempt to repeal full marriage for same-gender couples. They called the replacement of full marriage with the inferior civil unions an “incremental improvement.”

In lockstep, the National Organization for Marriage, a Roman Catholic church affiliate, also issued a companion surprise announcement the same day, also endorsing civil unions in New Hampshire for similar reasons. NOM was founded by Catholics, is staffed by Catholics, and appears to be mostly funded by Catholic laity and church officials. NOM’s membership rolls and finances are secret, some of its government filings are incomplete or contradictory, and it violates campaign finance disclosure regulations in every state where it opposes marriage equality.

Monday’s reversal in New Hampshire is just as profound as the decision by church officials two weeks ago to withdraw from this year’s public marriage battle in Maine. Neither decision was made independently, and both had to be coordinated with higher church officials. The Manchester Diocese, which is what the Roman Catholic church in New Hampshire calls itself, is a corporation sole and is subordinate to the Ecclesiastical Province of Boston, Massachusetts, which oversees Massachusetts, Maine, New Hampshire, and Vermont.

Among New Hampshire’s 1,315,809 residents, only 24% (309,987) are Catholic. Consequently, this sudden, last-minute switch by religious leaders only hours before the deadline may not have much impact upon the legislative votes being taken tomorrow. Four recent polls indicate that about 63% of all New Hampshire voters favor retaining the current full marriage law.

In addition to local impacts in Maine and New Hampshire, both of the Catholic church’s recent historic reversals may also help this year’s marriage equality efforts in 18 other states, especially New Jersey, North Carolina, and Minnesota. In New Jersey, advocates need just 15 more votes from the 120-member legislature to override the governor’s recent veto of a law which could upgrade civil unions to full marriage. In Minnesota and North Carolina, the church has been lobbying to ban marriage for all same-gender couples by amending those states’ constitutions so that marriage equality laws can’t even be considered. New Hampshire Bishop Peter Libasci gave no indication of when, whether, or how his church’s endorsement of civil unions in New Hampshire will affect church campaigns in other states.

Within its own religious ranks, Roman Catholic officials are continuing to reinforce Pope Benedict XVI’s formal view of bisexual, lesbian, and gay sexuality as “an intrinsic moral evil,” “intrinsically disordered,” and “inherently evil.” Moreover, the church still promotes the widely discredited “ex-gay” reparative therapy, which they claim cures patients of the sexual orientation that they are born with using a mixture of firm hope, additional prayer, new apparel, and/or life-long celibacy. Such reparative therapies have been discredited and denounced by every major mental/medical health professional organization as ineffective, painful, and dangerous to patients because of higher death rates from suicide.