Cleveland Bishop Richard Lennon has issued a decree formally excommunicating Fr. Robert Marrone, the pastor who followed his parishioners from St. Peter Church to the independent worship community that formed in the wake of their parish’s closing.

“I hereby declare that by doing so freely and with knowledge, the Reverend Robert J. Marrone has incurred ipso facto the automatic penalty (latae sententiae) of excommunication as stated in canon 1364, [paragraph 1] of the Code of Canon Law,” he said. 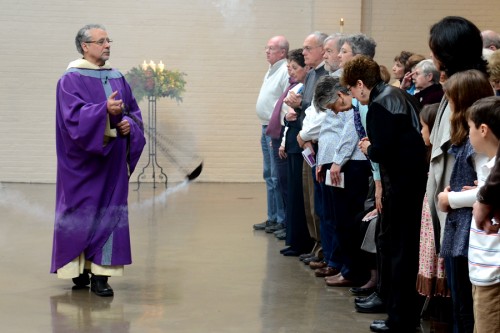 The decree accuses the priest of schism and forbids him from participation in celebrations of the sacraments or in public worship. Marrone can neither receive sacraments nor hold a position in any ecclesiastical office. Canon law allows him 10 days from his excommunication’s publishing to appeal the decree — in this case, until March 14.

Marrone addressed his status in a brief statement to members of the Community of St. Peter, stating the action “reflects the continuous pattern [in the diocese] which has marked the process of clustering, consolidation, closing, suppressions and reopening of parishes. I must, as I have stated repeatedly in the past, follow my conscience in this matter.”

Marrone expressed his gratitude to the community while reaffirming his commitment as their pastor-administrator.

“I will continue to serve the Community of Saint Peter as long as they call me to do so and as long as I am able to fulfill the responsibilities of the work entrusted to me,” he said.

The community scheduled a meeting for registered members only March 11 to discuss their pastor’s current status and future.

At posting time, Marrone had not responded to NCR’s request for comment.

In a statement accompanying his official decree, Lennon said, “The desired effect of excommunication is not to ban someone from the Church permanently. Rather it is a temporary status meant to be medicinal and to encourage the person to reconcile with the Church.”

He added that though excommunicated, Marrone remains a member of the church but has harmed his relationship with it and God through his actions, specifically holding a leadership position with the breakaway St. Peter community.

In March 2009, Lennon announced the closing of St. Peter Parish as part of a wave of closures across the diocese. In all, he shuttered 50-plus parishes and churches, primarily in response to decreasing membership and increasing costs.

Several parishioner groups appealed their cases to the Vatican’s Congregation for the Clergy, and in March 2012, it ruled in favor of 11 parishes, saying Lennon improperly shuttered them and ordering their immediate reopening.

Among those was St. Peter, which, given its unique circumstances, presented a more difficult process than the others. Unwilling to disband as a community upon learning of their church’s closure, a large contingent of St. Peter parishioners chose instead to incorporate themselves in October 2009 as a group outside the diocese’s authority.

A year later in August, they gathered for the first time at their new worship site, a renovated warehouse on Euclid Street. Marrone celebrated the Mass despite his prohibition to publicly celebrate sacraments under the terms of his requested one-year leave from priestly ministry.

Lennon in his statement said he met with Marrone a month before that celebration but said the priest refused to talk. Further attempts to meet also proved futile.

In January 2011, Lennon took a first step toward action against Marrone, giving him a formal canonical warning that he must resign from leadership with the Community of St. Peter. Marrone declined.

In May, Lennon issued a “Declaration of Loss of Canonical Office,” which removed Marrone as pastor of St. Peter Parish and requested he reconcile with the diocese by leaving the Community of St. Peter or face suspension from ministry.

“I will not comply with your decree to leave the community of Saint Peter because I must, before all else, follow what my conscience dictates,” Marrone responded in a letter to Lennon.

Addressing the diocese, Lennon urged parishioners to pray for Marrone and pray that the incident could bring the diocese together.

“I pray that this action may be perceived by the faithful as an initiative to bring unity and peace to the Body of Christ,” he said.