File under: Sour Grapes.  Really, Bishop?  It’s God who looks unfavorably upon marriage equality?  Really?  Remember when pious Catholics were warned not to attend marriages between a man and a woman that were held in non-Catholic churches?  Was God pissed off at that too back then?  I guess he got over it, huh?  You shameless fraud!

Bishop of Providence Thomas Tobin, the Roman Catholic leader of Rhode Island, on Thursday warned Catholics that God looked unfavorably upon those who attended same-sex weddings. 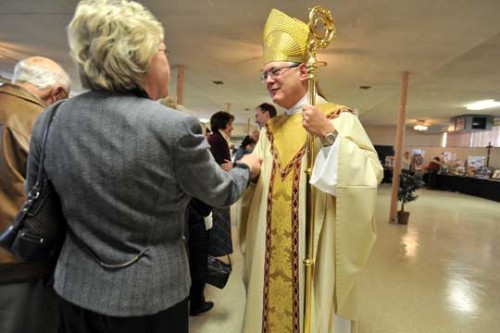 In a letter published as Rhode Island was poised to become the tenth state to embrace marriage equality, Tobin wrote that Catholics should have “respect, love and pastoral concern” for LGBT individuals.

But that didn’t mean Catholics should accept their relationships or attend their wedding ceremonies.

“At this moment of cultural change, it is important to affirm the teaching of the Church, based on God’s word, that ‘homosexual acts are intrinsically disordered,’ (Catechism of the Catholic Church, #2357) and always sinful,” Tobin explained.

“And because ‘same-sex marriages’ are clearly contrary to God’s plan for the human family, and therefore objectively sinful, Catholics should examine their consciences very carefully before deciding whether or not to endorse same-sex relationships or attend same-sex ceremonies, realizing that to do so might harm their relationship with God and cause significant scandal to others.”

One Reply to “Catholic bishop warns against attending same-sex weddings”