IN THE first sign of a reaction by the Vatican to the Cloyne report, its press officer has claimed the Holy See never instructed Irish bishops to withhold information on abuse cases. 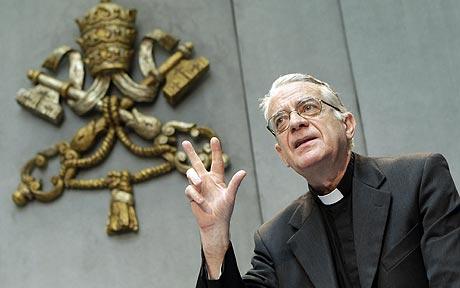 Fr Federico Lombardi said that, instead, the Irish Catholic Bishops Conference was told at a meeting in Rosses Point, Sligo, in November 1998 that neither the Church nor its priests should impede the course of civil justice.

Fr Lombardi’s statement rejected criticism of the Congregation of the Clergy, which undermined the Irish Church’s framework child protection document in 1997 by advising that mandatory reporting of abuse allegation could be contrary to canon law.

The Cloyne report considered this intervention by the Vatican, in 1997, to be entirely unhelpful because it told the Irish bishops that the adoption of their framework document could be “highly embarrassing” for diocesan authorities.

Fr Lombardi’s statement, delivered through Vatican Radio, said that the Congregation of the Clergy was only ever told that the framework was a working document from a bishops’ committee and not the agreed position of the Episcopal Conference.

He said its response was not an invitation to disregard Irish civil law, because there was no law in place at the time to require mandatory reporting.

He also said that, in 1998, the prefect to the Congregation for the Clergy, Cardinal Castrillion Hoyos, told the meeting in Sligo that the Church should not stand in the way of criminal investigations.

Fr Lombardi said the criticism of the Vatican since the publication of the Cloyne report went beyond any comments Ms Justice Yvonne Murphy made in the document itself, which he said were more balanced.

However, the survivors’ group One in Four described Fr Lombardi’s intervention as “wholly inadequate”.

Its executive director, Maeve Lewis, said his statement was an attempt to deny the findings of the Cloyne report.

“Fr Lombardi’s response completely lacks substance and is part of the now familiar refusal by the Vatican to acknowledge that the culture of loyalty and secrecy which facilitated the sexual abuse of children extended far beyond the Irish Church and that it was supported by official Vatican policy,” she said.

“It is further evidence, if it were needed, that the Vatican’s claim to prioritise the safety of children is completely lacking in credibility.

“It underlines the importance for the Irish state to ensure that an unequivocal legal framework is in place to protect children and to punish those who withhold information or place children in danger,” said Ms Lewis.

Minister for Foreign Affairs Eamon Gilmore has already asked the papal nuncio in Ireland, Dr Giuseppe Leanza, to return to him with a full explanation on the comments made by the Vatican in 1997.

Fr Lombardi delivered his statement on Vatican Radio under the guise of a personal comment rather than an official one.