IT’S THAT “if” word again. Irish Catholic bishops and archbishops have been finding it so very helpful in recent years when expressing personal sorrow for what others have perceived as wrongs on their part. 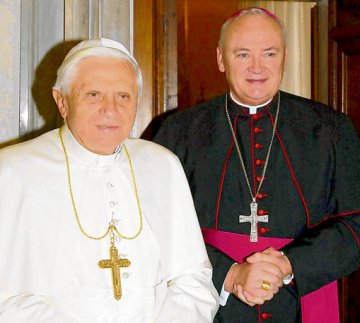 Such a delightfully useful word. It creates just the right amount of wriggle-room to allow a putatively penitent prelate allow an outside perception of deepest repentance while not really feeling such a thing at all.

You could say the small “if” word, with such a big meaning, comes from the same stable as that thoroughbred “mental reservation”, of which there is none better when conveying a false impression – truthfully.

And so, little “if” popped up when the former bishop of Cloyne John Magee spoke to RTÉ on Monday.

“To the victims I say I am truly horrified by the abuse they suffered – it is very clear to me when I read the complete report – and if through my not fully implementing the 1996 guidelines which we had, I have made any victim suffer more, on my bended knee, I beg forgiveness, I am sorry.”

The extravagance of the language (how Italianate!) should not distract from the place of little “if” in the scheme of things. Or that of the equally useful “fully” term.

The Dublin archdiocese liked the “fully” word too.

In explaining how it could say in a mid-1990s statement it had co-operated with gardaí in dealing with allegations of clerical child sex abuse cases, while at the same time retaining files not handed over to gardaí, the Dublin archdiocese pointed out it had not said it co-operated “fully” with gardaí.

This was also presented to the Murphy commission as an example of mental reservation in all its glory.

Recall that the Cloyne report found Magee “took little or no active interest” in the management of clerical child sexual abuse cases until 2008, 12 years after the framework document on child sexual abuse was agreed by the Irish Bishops’ Conference.

There are no “ifs” about that. It was “little or no” interest.

And Magee was similarly athletic with his use of language in the statement he issued on Monday.

He accepted “full responsibility for the failure of the diocese to effectively manage allegations on child sexual abuse”. He unreservedly apologised “to all those who suffered additional hurt because of the flawed implementation of the church procedures, for which I take full responsibility”.

This would suggest he was taking on board such responsibility because of his role as bishop rather than through any direct personal fault of his own.

And that “fully” word appears again. He let the victims down “by not FULLY [my capitals] implementing the guidelines which were available to me” and he apologised “to the people of the diocese for not managing this important work more effectively”.

It is difficult not to agree with the Cloyne woman, herself abused by a priest, who told my colleague Barry Roche last Monday she was sceptical over Magee’s expression of remorse, saying she had heard so many apologies from the bishop and other clergy in Cloyne that she questioned their value.

“Anyway, whatever he does now can’t undo what was done to us.

We can all be sorry after the fact – he can say sorry as much as he wants, but it isn’t going to change what happened to me or to the other girls who were abused,” she said.

Indeed, it is hard not to concur with Magee himself when he said on Monday, “I feel there is nothing I can say now, which will ease the pain and distress for victims.” There isn’t.

The problem Magee and other senior clergy face is that they have devalued language.

They have rendered words of sorrow and remorse redundant through repeated abuse.

They have done as did Humpty Dumpty in Through the Looking Glass.

“When I use a word,” he said, in rather a scornful tone, “it means just what I choose it to mean – neither more nor less.”

The question was, said Alice, “whether you can make words mean so many different things.”

The bishops and archbishops might also reflect on what became of Humpty Dumpty.