Standing outside the Cathedral of the Holy Cross in the South End, groups supporting victims of clergy sexual abuse accused Cardinal Sean O’Malley of maintaining “secrecy” and pressured him to craft a “comprehensive” list of accused Boston clergy. 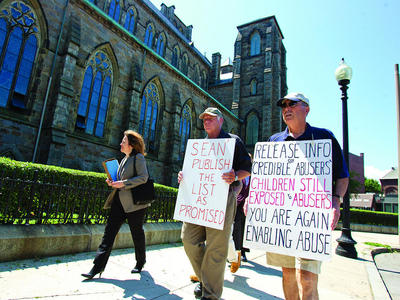 At issue is a list of priests and church employees accused of abuse that is currently being compiled and that an official said is “very close” to being complete.

The groups are concerned that the list will not include the names of accused religious order clerics because they claimed the archdiocese believes they do not fall under its supervision.

“A child hurt by an order cleric is just as damaged as a child abused by a cleric whose check is signed by the archdiocese,” said Anne Barrett Doyle, co-director of BishopAccountability.org.

A spokeswoman for the archdiocese said the list-making is ongoing.

“We understand there is great interest in this process. At this time, substantial progress has been made to facilitate the publication of names but it is complex and our work is ongoing. We continue to evaluate issues associated with disclosing information relating to deceased priests or those accused of a crime, whose guilt or innocence has not been established,” the statement said.

The groups at Thursday’s protest outside the cathedral released scores of names of accused order clerics who have worked in the archdiocese. Some have been arrested and others have been involved in settlements, the groups said.