The Rev. Thomas H. Teczar, a diocesan priest convicted in Texas of sexually abusing a child and who was publicly accused of molesting at least two Central Massachusetts boys, has been defrocked by the Roman Catholic Church. 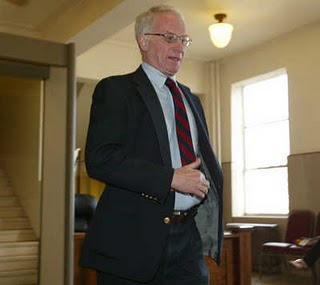 Officials with the Vatican and the Diocese of Worcester announced that Pope Benedict XVI has decreed that Mr. Teczar “is no longer in the clerical state.”

Mr. Teczar, who was ordained in 1967 by then-Bishop Bernard J. Flanagan, is the first diocesan priest to be laicized or removed from the priesthood.

As a result of the pope’s canonical decision, Mr. Teczar can no longer function in any capacity as a priest.

The 70-year-old was twice found guilty of molesting an 11-year-old boy in Ranger, Texas, about 20 years ago and is serving a 50-year sentence at the Texas Department of Criminal Justice’s Michael Unit in Tennessee Colony, Texas.

Mr. Teczar has filed a second appeal of his conviction to the Court of Criminal Appeals, the Lone Star State’s Supreme Court, which sits in Austin.

The Worcester Diocese has not allowed him to minister publicly since 1984.

Bishop Robert J. McManus, who had lobbied Vatican authorities to laicize Mr. Teczar, asked local Catholics to pray for those harmed by the former clergyman and all who have suffered abuse by priests.

“We hope this news will bring some comfort to the perhaps dozens of individuals Teczar molested as kids,” said David Clohessy, the director of the Survivors Network of Those Abused by Priests, adding that it shouldn’t have taken the Vatican years to defrock Mr. Teczar.

Mr. Teczar was originally convicted on March 7, 2007, of three counts of aggravated sexual assault and one count of indecency with a child but the conviction was thrown out in the fall of 2008 by an appeals court, which ruled that state District Judge Steven Herod had made errors during the trial.

A new trial was ordered and the priest was found guilty for a second time of molesting the boy.

The victim charged that he was abused by the Rev. Teczar when the priest was assigned to St. Rita’s Church in Ranger.

The victim, who at the time lived across the street from the church rectory, told authorities that he was enticed into having sex with threats and promises.

According to court testimony, the boy was given marijuana and alcohol and was allowed to smoke cigarettes and to drive the priest’s Mercedes.

The boy also went on boating trips with Mr. Teczar and went flying with the priest in a single-engine plane.

In the first trial, Mr. Teczar chose a judge to decide his fate and any resulting sentence. He opted for a jury trial the second time around.

Witnesses in the court proceedings included the victim and his mother, along with Daniel Hawley and William Demerit Bixley, who were both involved in a gay relationship with Mr. Teczar in the early 1990s.

Both are serving 35-year sentences.

Mr. Thomason said Mr. Teczar, in his second appeal, is charging that Judge Herod should have recused himself from presiding over the second trial.

“I don’t think he has a case,” said the prosecutor.

He said his office was working on the case when the bishop, a Fall River native who had been battling pancreatic cancer for two years, died.

Mr. Teczar had moved to Texas, where his brother lived, in the early 1980s after Worcester Bishop Timothy J. Harrington banned him from clerical duties here after allegations surfaced that he had molested at least two local boys.

Sexual abuse allegations were also later raised against the priest in Texas in 1993, five years after he began his ministerial duties in Fort Worth.

Raymond L. Delisle, a spokesman for the Worcester diocese, said Bishop McManus has asked that the Vatican laicize other local priests who have been removed from active ministry by the diocese because of allegations of sexual misconduct.

Mr. Delisle said he did not know who those priests were.

SNAP officials used Mr. Teczar’s defrocking to once again call for local church officials to release the names of all priests, nuns, seminarians, brothers, and church staff that stand accused of molestation.

“Worcester Catholic officials recruited, educated, trained, hired, transferred, and shielded Teczar,” said Mr. Clohessy. “So their duty to find and help others he hurt doesn’t end here. We beg them to act like real shepherds and use their vast resources to aggressively seek out those who were assaulted by Teczar and are still suffering in silence.”