When Pope Benedict XVI took over the disgraced Legion of Christ religious order last year, expectations were high that heads would roll over one of the greatest scandals of the 20th century Roman Catholic Church. 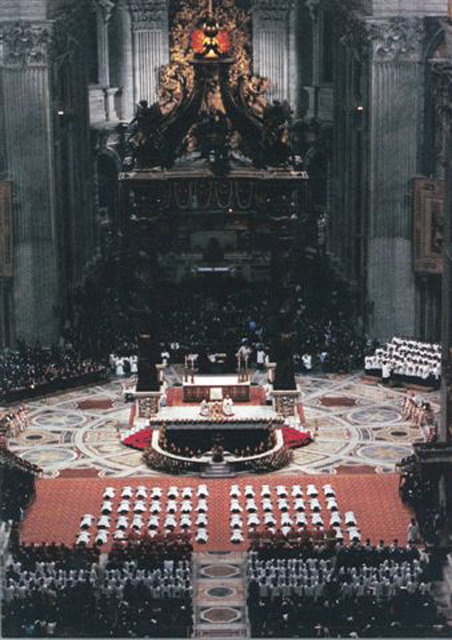 One year later, none of the Legion’s superiors has been held to account for facilitating the crimes of late founder Rev. Marciel Maciel, a drug addict who sexually abused his seminarians, fathered three children and created a cult-like movement within the church that damaged some of its members spiritually and emotionally.

An Associated Press tally shows that disillusioned members are leaving the movement in droves as they lose faith that the Vatican will push through the changes needed. The collapse of the order, once one of the most influential in the church, has broader implications for Catholicism, which is shedding members in some places because the hierarchy covered up widespread sexual abuse by priests.

In an exclusive interview, the man tapped by Benedict to turn the Legion around insisted that the pope tasked him only with guiding the Legion and helping rewrite its norms – not “decapitating” its leadership or avenging wrongdoing.

Cardinal Velasio De Paolis ruled out any further investigation into the crimes of Maciel, who as a favorite of Pope John Paul II had been held up as a living saint despite well-founded allegations – later proven – that he was a pedophile.

“I don’t see what good would be served” by further inquiry into a coverup, the Italian cardinal said. “Rather, we would run the risk of finding ourselves in an intrigue with no end. Because these are things that are too private for me to go investigating.”

The Holy See knew of the pedophile accusations, yet for years ignored his victims – as well as complaints about his cult-like sect – because he attracted men and money to the priesthood. As it is, John Paul’s legacy was marred by his close association with Maciel; Benedict’s legacy, already tarnished by the sex abuse scandal, may well rest in part on how he cleans up Maciel’s mess.

Critics, including some Vatican officials, contend De Paolis has an obligation to uncover the truth and take more radical action, given that the Vatican itself found Maciel created a twisted, abusive order to cater to his double life.

The Vatican also determined that for the Legion to survive it must be “purified” of the influence of Maciel, who died in 2008, since its very structure and culture had been so contaminated by his obsession with obedience and secrecy. Members were forbidden from criticizing their superiors, were isolated from their families, and told how to do everything from praying to eating an orange.

In the absence of radical change, the movement has seen a dramatic decline in membership since the scandal was revealed in 2009.

An estimated 70 of the 890 Legion priests and upwards of a third of the movement’s 900 consecrated women have left or are taking time away to ponder their future. Seminarians have fled – 232 last year alone, an unusually high 16 percent dropout rate for one year. New recruits are expected to number fewer than 100 this year, half what they averaged before the scandal.

The AP compiled the figures based on interviews with more than a dozen current and former members, who outlined inconsistencies in partial statistics provided by the Legion.

In August, about 20 current and former Legion priests met secretly for a week in Cordoba, Spain, to discuss forming an association to support Legion priests who leave the order, participants told the AP. The move could well encourage more to leave.

And earlier this month, the six editors of the Legion-affiliated Catholic news agency Zenit quit en masse, following the resignation of Zenit’s founder. He had cited differences in editorial vision and a loss of trust with the Legion’s superiors over the way they covered up Maciel’s crimes.

The Rev. Richard Gill, a prominent U.S. Legion priest until he left the congregation in 2010 after 29 years, has openly criticized De Paolis’ efforts, particularly his refusal to remove compromised superiors, saying “dismissals will be needed to restore some measure of confidence in the Legion.”

He called for an investigation into the origins of the scandal and noted that for most of the 70-odd priests who have left, “loss of trust in the leadership has been the primary reason.”

Claudia Madero left the movement in August after living like a nun for 35 years, citing the refusal of her Mexican superiors and De Paolis to embrace change.

“It’s true there have been some changes, but these are incidental, not essential,” she wrote in her resignation letter.

Benedict, however, gave De Paolis an unofficial vote of confidence last month when he kept him on as his Legion envoy while letting the 76-year-old Italian retire as head of the Vatican’s economics office.

Benedict’s spokesman, the Rev. Federico Lombardi, declined to say if the pope thought De Paolis’ mandate should be changed given the exodus, saying the cardinal speaks for himself.

Legion spokesman the Rev. Andreas Schoeggl, meanwhile, gave De Paolis a thumbs up, saying his work had been “great,” with all Legion priests helping rewrite the order’s constitutions – a shift from the past when decisions were made only at the top.

Yet if the current membership trends continue, the Legion may simply wither away as fewer people join a scandal-tainted congregation that the Vatican itself said has no clearly defined “charism” – a church term for the essential spirit that inspires a religious order and makes it unique.

After all, what would happen to the Franciscans if St. Francis were discredited? The Missionaries of Charity if Mother Teresa were found to be a fraud?

De Paolis paused when asked to define the Legion’s charism. “Bella domanda,” he said – “good question.” Noting that it was a work in progress, De Paolis cited the Legion’s evangelical zeal and insisted that even without a clearly defined charism, the vast majority of Legion members are happy, doing good work and serving the church.

But three current members of the movement say the reality is more complex: Some are thinking of leaving but haven’t taken the leap, some are in denial of the extent of the scandals, while others are actively working toward reform.

Members have coined the terms “awake” and “asleep” to describe where colleagues are in discovering the abuses of the Legion system, a process that is complicated by the Legion’s restrictions on use of the Internet and email.

And despite some changes, abuses continue: “Dissidents” are transferred away from their communities and subject to emotional harassment to test their resolve, three current members said on condition of anonymity because of fear of punishment.

De Paolis defended his commitment and approach to the reform, saying said he had “inserted” himself into the Legion’s administration, expanded the Legion’s governing council and shuffled some superiors around. He said he hasn’t dismissed any superiors outright because he needs them to learn the complex details of the order’s structure, culture and finances.

“How can I, someone who doesn’t know the Legion, who knows only a bit of Spanish, enter saying I’m in charge?” he asked. “If they (the superiors) wanted to sabotage me, it would have been so easy. If I had made myself the superior, they wouldn’t give me information, they would have hidden it from me.” He said his priority was to persuade the Legion’s leaders to sow change from within.

Maciel founded the Legion in Mexico in 1941 and it became one of the fastest-growing religious orders in the world, praised by Vatican officials who routinely celebrated Masses for the Legion and in Maciel’s honor.

Victims began to go public in the mid-1990s with allegations that Maciel had sexually abused them as seminarians, but the Vatican shut down a church trial, only to resurrect it years later. Maciel was sentenced in 2006 to a lifetime of penance and prayer – an inglorious end for a man who had enjoyed unparalleled access to the pope.

In his interview with the AP, De Paolis revealed for the first time that the Legion had reached financial settlements with “four or five” people who said they were sexually abused by Maciel, paying a relatively modest $21,000 to $28,000 (euro15,000-euro20,000) apiece. Negotiations, however, stalled with one victim who demanded millions, he said.

No one has publicly accused top Legion superiors of sexual abuse. But few believe Maciel’s closest aides were ignorant of his double life, given that he would disappear for weeks on end with thousands of dollars to visit his family and, by the end of his life, was openly living with his girlfriend.

Monsignor Rino Fisichella, who heads the Vatican’s evangelization office, said last year that the Vatican would be wise to look at who covered up for Maciel inside the Legion – “those who took his appointments, those who kept his agenda, those who drove him around.”

Yet some suggest De Paolis’ reluctance to investigate the coverup is based on fears the revelations could point to complicity by Vatican officials, who defended Maciel even after the sex abuse allegations were established.

“With the Legion I believe there were some who knew, but very few,” De Paolis said of Holy See officials. “The others saw that this group was blossoming, that it brought fruits, it offered a service to the church.”

De Paolis says he wants to save the fruits, the good that remains in the Legion. But those who have been harmed insist the Vatican must assign blame where it’s due and fix the wrongs, or lose all credibility.

“We’re angry at the church for allowing this,” said Peter Kingsland, a Catholic from Surrey, British Columbia, whose daughter was consecrated in 1992. “They could have claimed ignorance before, but they’re no longer ignorant – and now they’re a party to it.”