A Catholic bishop stepped down yesterday just six days before child sex abuse audits into two dioceses where he served are due to published. 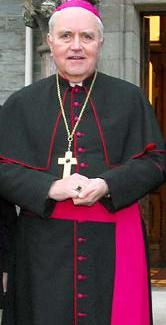 Bishop of Derry Seamus Hegarty’s resignation on health grounds was accepted by Pope Benedict just two weeks after offering it. He left his post immediately.

The Pope’s decision to allow Dr Hegarty to stand down so quickly is thought to be related to his health.

Two separate audits of the Derry and Raphoe dioceses, carried out into how the church dealt with paedophile priests, have been pencilled in for release early next week, sources told the Irish Independent.

However, previous releases of the reports carried out by the church-run National Board for Safeguarding Children in the Catholic Church (NBSCCC) have been postponed.

Church insiders say the contents of audits being carried out by the organisation have been seen by retired Bishop Hegarty as well as the current Bishop of Raphoe Philip Boyce.

Donegal-born Dr Hegarty served as Bishop of Raphoe from 1982 until 1994 before taking up his position in Derry where he admitted this year that allegations of child sex abuse had been made against 26 priests over the past 50 years.

Allegations against up to 20 priests have been made in the Raphoe diocese over a similar period. The audits will deal with all allegations made since the mid-1970s until the present day.

The Raphoe diocese faces questions over its handling of the case of Father Eugene Greene who abused dozens of victims in several Raphoe parishes. Greene was jailed for 12 years in 2000. Dr Hegarty has consistently denied knowing there were sex abuse allegations against Greene.

Gardai who investigated the case were told there were no records of any allegations against Greene.

There are also allegations in Derry that the church authorised out-of-court payments to two alleged victims of abuse.

2 Replies to “Bishop quits over health days before abuse audits”