News that Cardinal Bernard Law is leaving his job as head of a major Roman basilica was welcomed today by attorneys and advocates for clergy sex abuse victims, who have criticized his handling of the sex abuse scandal when he was head of the church in Boston a decade ago. 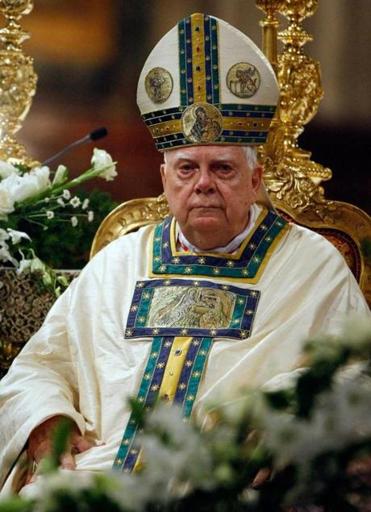 “With all due respect, society has not lost a great protector of children. Bernard Cardinal Law should return to Boston and address the clergy sex abuse victims who he let be sexually molested while he was cardinal,” said attorney Mitchell Garabedian, a Boston attorney who has represented numerous victims.

“Bernard Cardinal Law turned his back on innocent children, acted immorally, and should be held accountable,” Garabedian said.

Terry Donilon, a spokesman for the Boston archdiocese, referred all questions to the Vatican. A man who answered the phone at the Vatican press office declined to comment, suggesting a reporter call back on Tuesday.

Terry McKiernan, founder of bishopaccountability.org, a library and Internet archive of the clergy sex abuse crisis, also welcomed the news of Law’s departure.

“It’s a long time coming, but we are certainly glad his influence is finally, for all intents and purposes, over in Rome,” he said.

McKiernan said Law, because he had hit the age of 80, would no longer be able to vote, as part of a conclave, for a new pope.

He also said Law had also passed the maximum age for membership in a group of top Vatican officials who recommended the appointment of new bishops, where he had a “long history of rewarding managers who worked for him on sex abuse cases.”

He said Law would no longer be part of that “congregation” or “dicastery” of officials and “perhaps we’ve seen the last persons being rewarded with a bishop’s position as part of cronyism on the part of Cardinal Law.”

With his departure from the basilica post, McKiernan said, “even his informal power in the Vatican is truly on the wane.”

Carmen Durso, another Boston attorney who has represented victims of clergy sex abuse said Law’s resignation is “simply a changing of the guard because of his age” and not related to any sort of punishment by the Vatican in connection with the scandal.

“He shouldn’t have had that position in the first place because he didn’t merit it, given how he handled the sex abuse cases in Boston. … All this does is call to mind once again the fact that he wasn’t punished.”

“No bishops have been punished by the Vatican for the failure to supervise priests who abused kids. The real tragedy is that he was awarded. They made show of removing him and then they give him a prestigious position.”

“He should face a lifetime of penance to account for the lifetime of pain that the victims will have to endure. If I were Cardinal Law, I would get up every day and beg God’s forgiveness. It’s tragic that the church operates more like Enron than a church,” Durso said.

Law resigned in disgrace as Boston’s archbishop in 2002 after the clergy sex abuse scandal erupted.

Law’s 2004 appointment as the archpriest of one of Rome’s most important basilicas had been harshly criticized by advocates for clergy sex abuse victims.

Law turned 80 earlier this month. Victims’ advocates criticized plans for a birthday party for him in Rome. Law’s successor, Boston Cardinal Sean P. O’Malley, who had to deal with the legal and financial impacts of the crisis, was in Rome on church business, but a spokesman for O’Malley said his time there was “devoted to work” and he wouldn’t be attending.

Rocco Palmo, a former US correspondent for the London-based international Catholic weekly The Tablet, who covers church news and politics online and first reported Law’s move, said Law was leaving his sinecure several years earlier than other recent holders of the seat had. Palmo said he believed the Vatican was reacting to critics who have said Law’s appointment was a sign that the church did not “get it” when it came to clergy sex abuse.

“I think they’re sending a signal that it had become a liability,” he said. “I think it’s an acknowledgment, albeit more belated than a lot of folks would want, that that was not helping in terms of perception.”

He said there was no word on where Law might go, since he will lose the apartment that goes with being the archpriest of the basilica. The Vatican has several apartment buildings for retired church officials, he said. But he also noted that, as a cardinal, Law would be allowed to minister anywhere in the world.

The Vatican announcement made no mention of Law’s resignation, merely noting in a perfunctory, two-line statement that Benedict had named a new archpriest for the basilica.

“There’s only one person who can hold the post at a time,” said Palmo.

Law became the first — and so far only — US bishop to resign for mishandling cases of priests who sexually abused priests.