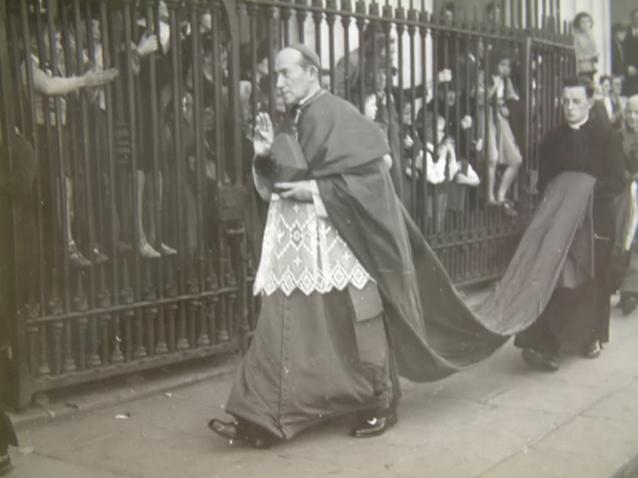 Two specific complaints and a separate unspecified “concern” against an unidentified cleric were reported to the Murphy Commission, a state-sponsored investigation into the handling of clerical sexual abuse of children in the Dublin archdiocese. The newspaper reported that Archbishop McQuaid, who retired in 1972 and died a year later, was the unidentified cleric.

The commission published its main report in 2009, but it said that “due to human error” the latest allegations emerged only in a supplementary report published in July. This does not name Archbishop McQuaid, but the newspaper is adamant that the allegations of abuse contained within it refer to the archbishop. One allegation is regarding abuse of a 12-year-old boy in 1961.

“The supplementary report records that in June/July 2009, as the commission was completing its main report, it received information which would have ‘brought another cleric’ within its remit,” Patsy McGarry, the newspaper’s religious affairs correspondent, said in an interview. The archdiocese “found a letter ‘which showed that there was an awareness among a number of people in the archdiocese that there had been a concern expressed about this cleric in 1999,’ the report states. The ‘cleric’ is Archbishop McQuaid.”

The main body of the Murphy report was highly critical of Archbishop McQuaid’s attitude toward abuse, accusing him of showing “no concern for the welfare of children.” However, this is the first suggestion that the official body had received specific complaints against Archbishop McQuaid, who was at the very apex of the Roman Catholic Church in Ireland for three decades.

In a statement, a victims’ group, One in Four, called for a statutory inquiry into the accusations, saying that “if Archbishop McQuaid was, as is alleged, a sex offender himself, then it is no wonder that the secrecy and cover-ups which have characterized the church’s handling of sexual abuse was so entrenched.”

The archdiocese told the newspaper that the police were investigating the matters dealt with in the supplementary report. There is also a separate civil action being taken against the archdiocese by one complainant.