A third lawsuit alleging abuse by Catholic clergy in Montana was filed Wednesday morning in Great Falls — this time from 10 plaintiffs alleging sexual assault by priests from within the Roman Catholic Diocese of Great Falls-Billings. 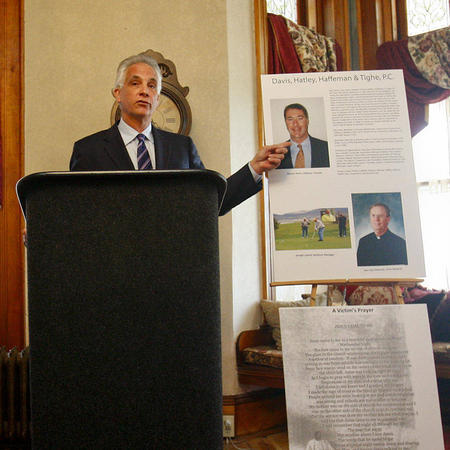 The only named plaintiff in the case, Timothy Becker, alleged that the Rev. Ted Szudera, who until last month was in active ministry in Stanford, abused him in 1978 and 1979 while Szudera was a priest in Livingston. Becker said in an interview Wednesday that he attended St. Mary’s Catholic School and the St. Mary parish in Livingston growing up, and that the alleged abuse occurred both in the church and in the school.

The Rev. Jay Peterson, vicar general for the Great Falls-Billings Diocese, said the other allegations set forth in the lawsuit were never brought to the church’s attention.

In a press conference Wednesday announcing the suit’s filing, attorney Tim Kosnoff of the Seattle-based law firm of Kosnoff Fasy said Becker and nine other plaintiffs told them about “appalling instances of sexual abuse going on for years” at the hands of priests and nuns in various places across Montana.

“The abuse is of the most hideous nature I’ve ever seen,” Kosnoff said, later adding a call to the Attorney General’s Office to investigate all claims of clerical abuse coming out of Montana.

Attorney General Steve Bullock responded with a statement that read in part:

“My top priority is keeping kids safe. Allegations of sexual abuse are always distressing, especially when the alleged perpetrator is in a position of trust.”

Bullock’s statement further reads that as of 4:30 Wednesday afternoon, his office asked for a copy of the complaint but didn’t get one.

“However, if it alleges that crimes have been committed, we encourage the victims to immediately contact their local law enforcement agency so those allegations can be investigated.”

The lawsuit is the third filed against the Catholic Church in Montana since last year and the first against the diocese that covers the central and eastern parts of the state. Montana plaintiffs were among a large group who received a $166 million settlement last year in a suit against the Oregon Province of the Society of Jesus. Some 160 plaintiffs also filed a sex abuse suit against the Diocese of Helena last year.

Kosnoff, whose firm represented a portion of the plaintiffs in both of those cases, said more Montana victims began coming forward after the other two suits began garnering publicity. In the firm’s experience in bringing suits against branches of the Catholic Church in the Rocky Mountain and Pacific regions, the attorneys said the number of claims coming out of Montana was alarming, saying that there have been more claims coming out of Montana than in the state of Washington.

“We’re really just seeing the tip of the iceberg here,” said Dan Fasy, a partner in the Seattle firm.

Kosnoff said he was especially troubled at the nature of the abuse described by plaintiffs in the most recent case, saying that “nothing is left to the imagination.” He said he was especially troubled that Szudera, one of the alleged abusers, was at one point a part of the Great Falls-Billings Diocese’s independent review board that takes up claims of abuse brought before the local church leadership. Kosnoff also accused the diocese of brushing away Becker’s allegations of abuse in 2006, when Becker brought the issue before the review board.

“They took no action against Father Szudera,” Kosnoff said. “It was a white-wash.”

Peterson, the vicar general of the diocese, was on the review board that heard Becker’s 2006 complaint. He said the board made a unanimous decision not to take any further action after a private investigator determined Becker’s allegations were unfounded. Peterson said that Szudera was not a member of the review board at the time.

“We followed our policy,” Peterson said. “We got the best input and advice we could.”

Peterson said that Bryan Lockerby, a captain at the Great Falls Police Department who also works as a private investigator, was the one who investigated Becker’s allegation and found that it was unfounded.

“It was very thorough and independent,” Peterson said of the investigation.

Lockerby said he could not confirm whether he did any work for the diocese, citing a confidentiality agreement he has with his clients, but he did confirm that he is called upon by various people to work as a private investigator.

“Father Ted had been requesting a sabbatical for quite some time — a well-deserved sabbatical,” Peterson said.

Peterson denied the allegations set forth in the lawsuit and said that the diocese would fight it in court.

Peterson said Szudera was appointed to the review board after the 2006 hearing and added that he didn’t remember there being any kind of hesitation from the board because of the previous allegation.

“He was exonerated,” Peterson said.

Attempts to reach Szudera at his most recent listed number were not returned Wednesday.

Peterson also put out a news release Wednesday that accused the attorneys behind the lawsuit of making “sweeping allegations” and attempting to “try these claims in a court of public opinion in hopes of generating new potential claimants.”

“Diocese of Great Falls-Billings has not been served with any complaint, and when it is, these claims and any valid defenses afforded the diocese will be properly handled in the courts,” the statement reads in part. “In the meantime, it seems inappropriate for any involved attorney to comment on the litigation.”

The release states that the diocese has had a policy for reporting abuse from clergy members in place since the early 1990s and that information on how to report abuse is posted in churches and published in the diocese newspaper, The Harvest.

With the exception of Becker’s 2006 complaint, the other allegations in the lawsuit were never brought to the diocese’s attention, Peterson wrote in the release.

“Rather than bring these claims to the attention of the diocese through its publicized reporting procedure so the diocese could respond and assist any victims, it appears the claimants have instead chosen to file a lawsuit while their attorneys engage in inflammatory rhetoric,” the release reads.

Becker, who now lives in Salt Lake City, said that he was not satisfied with the diocese’s reaction when he brought his abuse allegation to its review board in 2006.

“It was like a cold room of people just staring at you,” Becker said of the hearing, adding that it was like “I was speaking to the wall.”

Becker said he met with three people initially in May 2006: Peterson, the diocese’s attorney Maxon Davis and diocese business manager Joseph Luncki. In August of that year, another member of the review board whom Becker didn’t name visited him in Salt Lake City. Becker said that in the end, the board agreed to pay for his therapy sessions.

Peterson confirmed that the diocese did agree to pay for Becker’s counseling.

“We did offer some counseling out of a pastoral concern,” he said.

Becker said that he is still a “strict Catholic,” but finds himself having trouble trusting any priest he meets now.

“Priests are just like everybody else — human beings — and they have to be accountable for what they do wrong,” Becker said. “I’m hoping to make it clear that anybody who is abused needs to come forward and make it known that they can’t do these things to any of God’s children.”

Leander James, an attorney out of Coeur d’Alene who is also representing the plaintiffs, said Wednesday that the diocese’s reporting process is biased and doesn’t seem to be offering real solutions to the problem of clerical abuse.

“This is not a process that should be internal,” said James, who is also Catholic. “Doesn’t that smack of aiding and abetting a cover up? … It’s the fox guarding the hen house.”

The nine other plaintiffs, seven men and two women, are identified only by initials and allege abuse by priests in the St. Xavier mission on the Crow Indian Reservation, the St. Xavier Church in Hardin, St. Michael’s Church in Absarokee, the St. Paul’s Mission in Hays, the now-shuttered St. Thomas Orphanage in Great Falls and an un-named church in Wolf Point. All the plaintiffs allege the abuse occurred when they were children.

The 22-page complaint also names, fully or partially, other priests besides Szudera as alleged abusers: Edmund Robinson of the St. Paul Mission in Hays, James Reynolds of the Wolf Point church, a “Father Heretick” of Absarokee and a “Father O’Reilly” at the St. Xavier Mission.

The diocese is the only defendant named in the case, although the filing also leaves open 10 spaces each for additional corporate entities or individuals.

The suit asks for monetary damages for pain and suffering as well as punitive damages “in an amount sufficient to serve as a warning and example to others.” The amounts of those damages will be determined later by a jury if the case makes it to court.

Kosnoff said that most cases similar to this one end with a settlement before reaching court.

The complaint also calls for a number of “equitable relief” measures, including: