This is perfect!  “I’m not saying that we should start punishing everybody for any negligence in his duties. But … it is not acceptable that when there are set standards, people do not follow the set standards.”  Talking tough, but there will be no consequences unless you’re caught red handed.

Vatican prosecutor bluntly warned Catholic bishops Wednesday that they could be disciplined if they do not follow church law and standards when managing priests who have abused children. 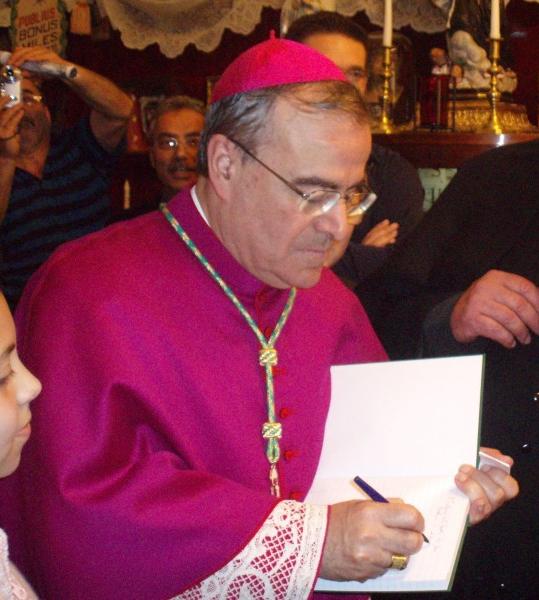 Monsignor Charles Scicluna, who handles sex crime prosecutions for the Vatican, told reporters that bishops would be held accountable under church law for how they deal with abusive clerics.

“It is a crime in canon law to show malicious or fraudulent negligence in the exercise of one’s duty,” Scicluna told journalists, according to an Associated Press report. “I’m not saying that we should start punishing everybody for any negligence in his duties. But … it is not acceptable that when there are set standards, people do not follow the set standards.”

It’s a familiar topic for Catholics in Kansas City, where Bishop Robert W. Finn and the Diocese of Kansas City-St. Joseph are facing misdemeanor charges in Jackson County for purportedly not reporting suspicions of child abuse by the Rev. Shawn Ratigan.

Finn and lawyers representing the diocese have entered not-guilty pleas to the charges, and trial is scheduled for September.

Scicluna is participating in Rome at a four-day church conference on child abuse that concludes today.

His tough new talk of church discipline for bishops raises a curtain on a church legal system of which even Catholics may only be vaguely aware.

Canon law, the church’s own regulatory system, generally comes to mind only when a Catholic seeks an annulment. It is, however, a legal system that traces its history back well more than 1,000 years.

Canon lawyers say church law complements civil law on child sexual abuse and dictates how clergy are to properly respond to such reports.

Lawyers with an interest in the myriad court cases spawned by the Kansas City scandal occasionally have used canon law to explain how and why the church is responding to its new legal quagmire.

Former U.S. Attorney Todd Graves, who was commissioned by the diocese to study the church’s handling of the Ratigan case, recognized the importance of canon law. He devoted more than 10 pages of his report, which was released two months before charges were filed, to an explanation of church law.

But canon law should not be viewed as a religious mystery, one expert said recently.

Nicholas Cafardi, former general counsel for the Diocese of Pittsburgh, dismissed a notion recently making the rounds among Kansas City lawyers that the diocese could not resolve its case through a plea agreement because the diocese — as an expression of the “Body of Christ” — could not make the required admissions.

The law and the church

Codified in the 12th century and extensively revised twice in the 20th century, canon law set out the structure of church governance, defined the responsibilities of clerics and established a legal system with rights, standards of evidence and expectations for church lawyers, judges and prosecutors.

The church laws most directly applicable to the U.S. church on child abuse issues are known, in shorthand, as the “Essential Norms.” U.S. bishops crafted the norms in 2002, and the Vatican quickly recognized them as binding church law.

Cafardi noted that church law is in almost complete harmony with secular law in dictating how the diocese and its leaders are to handle child abuse cases.

“There’s nothing in the Code of Canon Law that says you are relieved of your responsibilities under civil law,” Cafardi said.

Under the norms, clerics are required to report child abuse to civil authorities and then cooperate with their investigation.

Other canon lawyers said that if Kansas City clerics were confused or uncertain if they should have reported Ratigan under civil law, canon law made their responsibilities clear.

Just seven months before Ratigan’s laptop, allegedly containing disturbing photographs of naked girls, landed on the desk of a chancery official, Pope Benedict XVI said child pornography was an act of sexual abuse of a minor.

Under canon law, a church official with evidence of that crime must trigger the diocese’s child abuse investigation and reporting programs, including calls to civil investigators, experts said.

In the early days of the Ratigan scandal, Monsignor Robert Murphy, Finn’s second in command, delayed notifying civil authorities until he had obtained narrow legal opinions that the images were not pornographic, according to the Graves report.

Patrick Wall, a canon lawyer and former Catholic priest, said that even before soliciting the legal opinions, Murphy was obligated under church law to make the report.

Because Murphy was asking questions about child pornography, he clearly was aware that it could have been present on Ratigan’s computer, Wall said.

“According to the law the Vatican established, he needed to call the cops, tell … Bishop Finn and start the process,” Wall said.

A lawyer representing Murphy declined to comment. He has not been charged in the case.

Though Finn has received unprecedented scrutiny from civil authorities for his handling of the Ratigan case, the scrutiny he faces within the church remains a mystery to the public.

He could get feedback on his work in the diocese next month when he and other regional bishops travel to Rome to meet with the pope and other church leaders. Though hardly routine, such visits are required under canon law.

And though bishops answer only to the pope, the pontiff has, relatively recently, assigned some oversight responsibilities to another church authority.

In a May 2010 update of church child abuse laws, Benedict gave the Congregation for the Doctrine of the Faith the authority to judge cardinals and bishops, as well as priests and deacons. That congregation, once known as the Inquisition, has been a powerful enforcer of church discipline since the 16th century. Scicluna serves the congregation as its promoter of justice.

Thomas Doyle, a priest and canon lawyer who once worked for the pope’s ambassador to Washington, said the congregation’s new authority is intriguing.

“They do have the authority to judge bishops now,” Doyle said. “How they’re going to apply that is going to be very interesting.”