A local gay recovery group will not be holding its annual fall fundraiser in the social hall of the Castro neighborhood’s Most Holy Redeemer Catholic Church after officials said that no drag queens would be allowed. 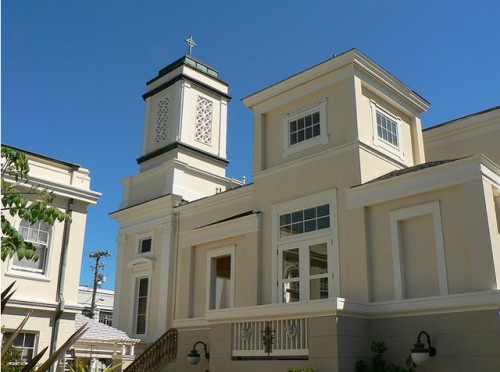 For the past couple of years the Castro Country Club has held its event in the church’s social hall and had drag queens as entertainment.

As a statement issued by the country club’s board of directors explained, the new no-drag-queen policy at the church is simply unacceptable.

“The Castro Country Club had planned to hold our third annual Harvest Feast on October 20, 2012, at Most Holy Redeemer Church, where we have held this and other events in the past,” the directors said in a statement.

But that changed when the club was notified by the church last week that they would not be able to hold the dinner if any drag queens were part of the program, the board said.

“In previous years, we have had Ivy Drip and Heklina, both well-known entertainers and community fundraisers, serve as emcees of the event, and we felt we could not in good conscience abide by the church’s new policy,” the board said.

“It is our organization’s policy to be inclusive and welcoming to all. Drag queens are no exception. We are currently seeking an alternative venue for the Harvest Feast, which provides an important source of revenue for our annual budget,” the board added.

Individual members of the country club declined to comment and referred to the board’s statement.

on Monday, August 6, that drag queen performers and emcees are no longer permitted to participate in events at the church.

Costello said that during a telephone conversation with a Castro Country Club representative, when the topic of drag queens came up, he told the person, “That is not going to work under the present circumstances.”

“I said work with me. You can still have the dinner. You can have a regular emcee, but not drag queens on church property,” Costello said.

New leadership
It seems the directive is the result of several factors.

“I am the new pastor,” Costello added. “There is a new archbishop. The archdiocese told me straight out, ‘No drag queens.'”

The change of policy at Most Holy Redeemer was greeted with charges of discrimination, homophobia, and calls for compromise, even reconciliation.

“It’s really ridiculous and discriminatory,” said Zachary Davenport in a phone interview. “I mean it’s like, who’s next?”

Most Holy Redeemer Catholic Church in the Castro has banned drag queens, forcing the Castro Country Club to find a new venue for its fall fundraiser.
(Photo: Rick Gerharter)
The drag queen ban is personal for Davenport, who, in drag as Laybelline has served as emcee for a variety of sobriety-related nonprofit events held at Most Holy Redeemer.

“What constitutes drag?” he said. “If we want to get funny, let’s talk about the priests. Hello.”

Davenport also pointed to a nuanced landscape of gender identity and expression, which the new policy at Most Holy Redeemer seemingly blocks. “There are members of our community who express their gender all the time, and are not necessarily performing, but would say, ‘Yes, I am in drag,'” he said.

“Yes, I realize [Most Holy Redeemer] is a church. But it is in the Castro,” said Davenport. If, “the new archbishop is wanting to do away with drag queens and the gays,” then “look where you are. [The neighborhood] has a history of 30 to 40 years of being a safe place.”

A California native from Watsonville, Davenport, 28, who is not Catholic, added, “I know gay people who go to Most Holy Redeemer and love the church.”

Dignity San Francisco offered its take on the new policy at Most Holy Redeemer.

“This is an unfortunate development between Most Holy Redeemer and the Castro County Club,” said Ernest L. Camisa, treasurer of the Dignity/SF chapter, speaking for the organization by e-mail and over the telephone.

“It looks like the Archdiocese of San Francisco wants to protect its image by not condoning cross-dressers. By doing so they show that they care more for their image than they do for gay people trying to overcome alcohol addiction. Here the church looks like it values its own image more than it does human life. This is not Christian, but callous,” Camisa said.

A couple of Most Holy Redeemer parishioners declined to comment. No one from Castro Country Club was willing to speak on the record.

Reached by phone, George Wesolek, department head for communications and public policy for the archdiocese, said he was not in the policy conversation “loop.” Nonetheless, Wesolek acknowledged, the situation is “difficult pastorally,” particularly in “very divided and fractious church.”

Others weigh in
Meanwhile, across the country, the new no-drag queen policy has struck a chord among gay Catholic activists and those in ministry.

“I think this is a very difficult and complex time for not only the pastor and the people of Holy Redeemer parish, but also for members of the drag community. All three groups are an example of ordinary people being called to do some extraordinary things for their neighbors. The pastor and parish of Most Holy Redeemer have to be very careful not to throw out the baby with the water in the name of homophobia. Jesus, not homophobia, should guide us in this matter,” said Joe Murray, a founder of the Chicago-based the pro-LGBT Catholic Rainbow Sash Movement.

The Rainbow Sash Movement, stateside and abroad, advocates reception of Eucharist by visibly gay persons during Mass. The movement is best known for donning rainbow sashes on Pentecost and approaching the altar for communion during Mass that day.

“Drag is a historically-based, time-honored entertainment tradition that has existed, at least, since classical times,” he said.

“Canceling this program without any explanation or substantial reason is simply caving into fear of reprisals from higher authorities. If the [Most Holy Redeemer] community has supported this event for years, there has obviously been a relationship that has developed between the sponsoring organization and the parish, and it would be great if the two groups could work together to find some resolution. Reconciliation is what any and every parish should be about. If the parish does not offer a substantial intervening reason, we can only assume that other forces have had influence,” said DeBernardo.

Located just outside Washington, D.C., New Ways is a pro-gay Catholic ministry of education, healing, and reconciliation for LGBT Catholics, their families, friends, and the wider church.

For his part, Costello said the Castro Country Club event would have been in its third year at Most Holy Redeemer.

“I am big on compromising,” he said. But “[Castro Country Club] would not work with me. It was all or nothing. And they got nothing.”

Costello also said that with respect to drag queens, “We have had bad experiences, not only in church, but also the [social] hall.”

Still, “I feel bad because [Castro Country Club] do[es] good work in the community,” he said.

While Costello did not elaborate on any social hall “bad experience,” one church incident nearly five years ago caused a media stir.

During Sunday Mass on Sunday, October 7, 2007, Archbishop George Niederauer gave communion to two members of the activist group and drag troupe Sisters of Perpetual Indulgence, an indecent that angered, hurt, and even horrified some conservative Catholics, as well as it grabbed local and national headlines.

Called to task locally by the California Catholic Daily and a “90 years young” priest, the Reverend John Malloy, on A Shepherd’s Voice blog, Niederauer apologized for giving communion to gays dressed as nuns.

Attempts to reach the Sisters for comment on the recent change of policy at Most Holy Redeemer were unsuccessful.

Meanwhile, as recent as April 29, in a Shepherd’s Voice post Malloy blasted the “gay parish” for hosting an April 14 “drag show” to benefit the Castro Country Club, “a substance abuse treatment organization.”

“Hosting a drag show at [Most Holy Redeemer] is the equivalent of sending a case of wine to Castro Country Club,” wrote Malloy. “It is beyond irresponsible for the Archdiocese of San Francisco to allow it.”

And while local conservative bloggers and orthodox Catholic activists may well exacerbate tensions at Most Holy Redeemer, Rainbow Sash Movement’s Murray noted, “The appointment of Archbishop-elect [Salvatore] Cordileone has brought this matter to a head.”

And yet, said Murray, “Let’s be very clear homophobia in the church existed prior to this event.”

He went on to fault the teaching of the Catholic Church, the Catechism, “for saying on the one hand that homosexuals are to be welcomed and every form of unjust discrimination is to be condemned, while saying at the same time saying we are morally disordered for our love.”