A senior cleric resigned under duress on Monday and Pope Benedict took the rare step of changing Vatican law to allow his successor to be elected early, adding to a sense of crisis within the Roman Catholic Church. 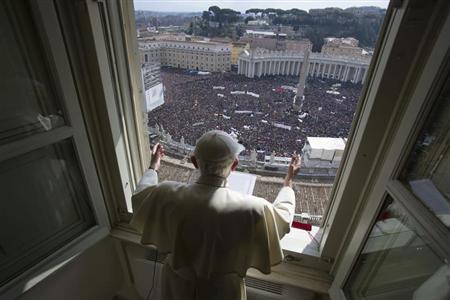 With just three days left before Benedict becomes the first pope in some six centuries to step down, he accepted the resignation of Britain’s only cardinal elector, Archbishop Keith O’Brien, who was to have voted for the next pope.

O’Brien, who retains the title of cardinal, has denied allegations that he behaved inappropriately with priests over a period of 30 years, but said he was quitting the job of archbishop of Edinburgh.

He could have attended the conclave despite his resignation, but said he would stay away because he did not want media attention to be focused on himself instead of the process of choosing the next leader of the 1.2 billion-member Church.

O’Brien’s dramatic self-exclusion came as the Vatican continued to resist calls by some Catholics to stop other cardinals tainted by sex scandals, such as U.S. Cardinal Roger Mahony, from taking part.

Catholic activists have petitioned Mahony to exclude himself from the conclave so as not to insult survivors of sexual abuse by priests committed while he was archbishop of Los Angeles.

In that post from 1985 until 2011, Mahony worked to send priests known to be abusers out of state to shield them from law enforcement scrutiny in the 1980s, according to church files unsealed under a U.S. court order last month.

“O’Brien’s recusal is also important as a precedent,” said Terence McKiernan, of BishopAccountability.org, a U.S.-based documentation center on child abuse by priests.

“Many cardinals scheduled to join the conclave have been involved as bishops in handling cases of clergy sexual abuse, and some of them have done such a bad job that they too should recuse themselves from the conclave,” he said.

Benedict changed parts of a 1996 constitution issued by his predecessor John Paul so that cardinals could begin a secret conclave to choose a successor earlier than the 15 days after the papacy becomes vacant, as prescribed by the previous law.

The change means that in pre-conclave meetings starting on March 1, a day after Benedict leaves on Thursday, they can themselves decide when to start.

Some cardinals believe a conclave, held in secret in the Vatican’s Sistine Chapel, should start sooner than March 15 in order to reduce the time in which the Church will be without a leader at a time of crisis.

But some in the Church believe that an early conclave would give an advantage to cardinals already in Rome and working in the Curia, the Vatican’s central administration and the focus of accusations of ineptitude and alleged sexual scandals that some Italian newspapers speculate in unsourced reports led Benedict to step down. The Vatican says the reports are false.

The Vatican appears to be aiming to have a new pope elected by mid-March and installed before Palm Sunday on March 24 so he can preside at Holy Week services leading to Easter.

Cardinals have begun informal consultations by phone and email in the past two weeks since Benedict said he was quitting.

Benedict’s papacy was rocked by scandals over the sexual abuse of children by priests, most of which preceded his time in office but came to light during it and which, as head of the Church, he was responsible for handling.

His reign also saw Muslim anger after he linked Islam to violence. Jews were upset over his rehabilitation of a Holocaust denier. And, during a scandal over the Church’s business affairs, his butler was convicted of leaking his private papers.

With the Italian media speculating about conspiracies and alleged sexual scandals inside the Vatican that they say may have influenced his decision to resign, the pope’s spokesman said an internal report into leaked papal documents would remain confidential and only be shown to the next pontiff.

The Vatican has accused the Italian media, some of which have called for the “Vatileaks” report to be made public, of spreading “false and damaging” rumors in an attempt to influence the cardinals as they head to Rome for the conclave.

The three cardinals who prepared the report for the Vatican met the pope on Monday.

Compiled after the arrest of Benedict’s butler, who leaked sensitive documents to the media, the report has been seen only by the pope and the three cardinals and would be seen only by the next pope, the Vatican said.

The butler’s leaked documents told of corruption in the Vatican, infighting over the running of its scandal-mired bank, and painted a picture of an administration where some clerics were more interested in their careers than serving the pope.

On Sunday, the pope, in his last appearance from his window overlooking St Peter’s Square, said his abdication was God’s will and insisted he was not “abandoning” the Church but stepping down for health reasons.

His last public appearances include a general audience in St. Peter’s Square on Wednesday and a meeting with cardinals on Thursday before he flies to the papal summer retreat near Rome.