THE resignation of Pope Benedict has prompted much debate about his legacy but another question also arises — why do so many people in this country continue to care about an anachronistic institution that doesn’t want them as members?
It’s ironic really. Senior Church figures whine about the increasing marginalisation of religion in society without ever conceding that it is their own intransigent dogma that is to blame for its increasing irrelevance. 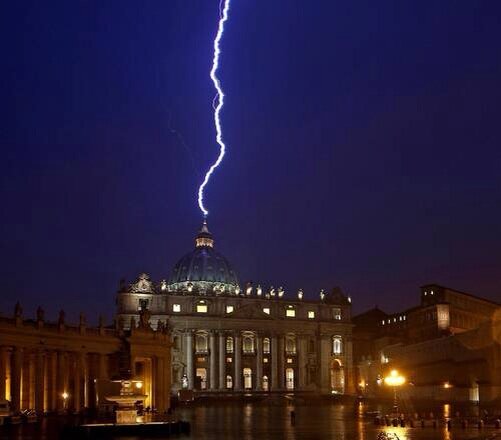 While the behaviour of the Catholic Church is hard to comprehend, so too is that of à la carte Catholics determined to remain part of an organisation with core teachings many find offensive or, frankly, ridiculous. Personally, I have some degree of sympathy for the view of Archbishop Diarmuid Martin, who last year implored lapsed Catholics to have the courage of their non-convictions and stop cloaking themselves in the comfort blanket of a faith they no longer possess.

There should be no confusion. It’s not as if the Church’s strident views on a host of controversial social issues — like homosexuality and contraception — are shrouded in any mystery. In his infamous letter on the pastoral care of homosexual people, written in 1986, the then Cardinal Ratzinger was unequivocal. “Although the particular inclination of the homosexual person is not a sin, it is a more or less strong tendency ordered toward an intrinsic moral evil; and thus the inclination itself must be seen as an objective disorder.

“Therefore special concern and pastoral attention should be directed toward those who have this condition, lest they be led to believe that the living out of this orientation in homosexual activity is a morally acceptable option. It is not,” he wrote.

Anyone who doesn’t believe that homosexuality is “a disordered sexual inclination” is engaging in “deceitful propaganda” which is “profoundly opposed to the teaching of the Church”.

But wait. All is not entirely lost. Renouncing homosexual acts and living a chaste existence will allow gay people to “dedicate their lives to understanding the nature of God’s personal call to them”.

In short, you can spend your life as a self-hating homosexual, tormented with the knowledge that God instilled in you such disgusting urges as a sort of bizarre penance, or you can simply ignore all of that guff and get on with your life.

The stark choice between abstinence and damnation is something of a recurring theme when it comes to much Church teaching. In his 1968 encyclical, Humane Vitae, Pope Paul VI laid out the unambiguous Catholic position on contraception — it’s against God’s divine plan.

“It is not licit, even for the gravest reasons, to do evil so that good may follow … even when the intention is to safeguard or promote individual, family or social wellbeing.”

Couples wishing to plan their families were told to roll the dice and rely on the rhythm method. Bizarre as it seems now, this view persisted in Ireland up until the early 1980s, even after a young mother was forced to go to the Supreme Court, in 1973, to fight for the right to import contraceptives after her doctor told her another pregnancy could kill her.

While there may still be some devout Catholics who adhere to this teaching, the suspicion must be that most happily ignore it yet the Church’s position hasn’t changed a jot in the intervening 40 years.

“One cannot accept the hypothesis that a slight moral disorder, on the lines of venial sin, is at stake … for the Magisterium contraception is such a morally disordered form of behaviour that it constitutes gravely sinful matter,” explained professor of moral theology, Fr Lino Ciccone.

The only softening was an admission by Pope Benedict, two years ago, that the use of contraceptives was acceptable “in certain cases”, for example by gay prostitutes to reduce the risk of HIV.

However, the Vatican later stressed that the Pope was not redefining Catholic teaching and the pope had merely “considered an exceptional situation in which the exercise of sexuality represents a real risk to the lives of others”.

So, if you’re married and using contraceptives you are still engaging in “gravely sinful” behaviour. Meanwhile, it goes without saying that those unmarried people living in sin — with contraceptives or without — are hopeless cases whose eternal reward will likely be a fiery affair.

While the Church is happy to see women barefoot and pregnant, it definitely doesn’t want to see them ordained and anywhere near an altar. To understand why a penis is the most important qualification when becoming a priest, the faithful are asked to delve back into the mists of time and remember that Jesus chose 12 male apostles.

Writing in 1994, Pope John Paul II repeated this mantra, saying the Church therefore had no authority to ordain women, while Pope Benedict urged Catholics, seeking a more nuanced explanation, to submit to the “radicalism of obedience”. Basically, just accept it. In case there was any lingering confusion, the Vatican, in 2010, said that anyone involved in the ordination of women was engaged in a grave crime against the church, on a par with child abuse, and would be instantly excommunicated. Strangely, the fact that there were no female apostles is reason enough to debar women from ever being ordained, but the fact that the same apostles were married is not seen as convincing evidence that priests should also be allowed to marry. None of this makes any sense, but that doesn’t stop otherwise erudite members of the hierarchy trotting this out as a supposedly credible excuse when asked about the lack of women in positions of authority in the Church.

MEANWHILE, a recent discovery by a Harvard professor, who has found a scrap of 4th-century papyrus that indicates early Christians believed that Jesus was married and his wife was an apostle, could prove most inconvenient for the Church.

While the scrap of papyrus is still undergoing tests to prove its authenticity, a number of preliminary examinations by experts have found no evidence of any forgery — a minor detail that has not stopped the Vatican from claiming that it is a dud in order to avoid any awkward questions.

Instead of encouraging dialogue and debate about contested teachings, the hierarchy advises conflicted Catholics to either shut up or sling their hook — and then professes bafflement when church attendance is down and their archaic views don’t gain any traction in public debates.

Religious faith is a matter for each individual’s conscience, but the line of demarcation between faith and habit seems to have grown increasingly blurred for many still maintaining a tangential relationship with an organisation that displays so little comprehension of the reality of their lives.

The election of a new pope is certainly a historic occasion, but there has been no indication that a modernising or revitalising force is waiting in the wings to breath life into a decaying institution.

Once the pomp and spectacle is over, it is likely that nothing substantive will have changed and the inexorable decline of the church in the West will continue unabated.