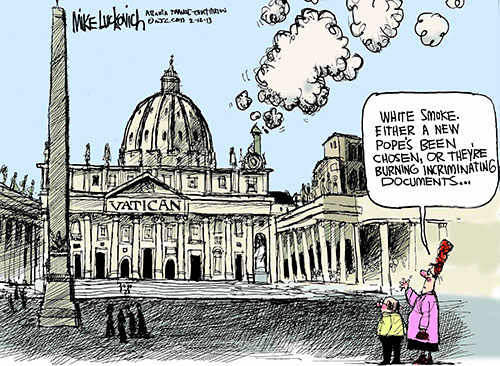 The Committee on the Rights of the Child wrote this month that it was “deeply concerned” to find widespread sexual abuse by clerics and staff of religious institutions and “a lack of measures … to properly investigate cases and prosecute them”.

Britain’s National Secular Society, which drew attention on Monday to the little-noticed report, said it hoped the Catholic pope to be elected next month would open Church files to help prosecute as yet undiscovered cases of clerical sexual abuse.

The scandal of predator priests has haunted the pontificate of Pope Benedict, who will resign on Feb 28. The pope has apologized for the abuse and met victims in several countries, but cases and damning internal files are still coming to light.

After years of legal battles, the Los Angeles archdiocese bowed to a court order last month and released 12,000 pages of files showing its former head, Cardinal Roger Mahony, had sent accused abusers out of state to avoid justice in the 1980s.

“The committee is deeply concerned at information of sexual abuse committed by clerics and leading members of certain faith-based organizations and religious institutions on a massive and long-term scale,” said the report, which gave no details.

It said it also found a “lack of measures taken by (U.S. legal authorities) to properly investigate cases and prosecute those accused” and urged them to order law enforcement officials to step up efforts to uncover and bring charges against abusers.

The National Secular Society, which campaigns at the United Nations against privileges for religious groups, accused Benedict of hushing up abuse cases and obstructing justice.

“We can only hope that his successor opens the secret files and treats victims with the respect they deserve,” its executive director Keith Porteous Wood said in a statement.

The abuse crisis is expected to be among issues cardinals discuss before they enter the Sistine Chapel in mid-March to elect a new pope, but the secrecy of their consultations means it is not clear how much of a role it will play in their choice.

The committee, which drew its conclusions after a routine review of U.S. compliance with the 1989 Convention on the Rights of the Child, adopted its report in Geneva on Feb 1.

The Church and its insurance companies in the United States have already paid more than $2 billion in damages to victims. Clerics from other faiths have also been accused or convicted of sexual abuse of children, but on a lesser scale than Catholics.

Catholic dioceses with known abuser priests have staff files on them and correspondence with the Vatican about some of them. These are confidential but courts and government inquiries in several countries have forced some of them to be opened.

Sexual abuse cases in the Catholic Church began coming to light in the 1980s and became a major crisis in 2002, when U.S. media began reporting systematic cover-ups for abusive priests.

Ireland, Germany, Belgium and the Netherlands have grappled with similar scandals after official or Church-led reports exposed abuse in schools and church organizations.

The Church in many countries has set up new guidelines to deal with past abuse, prevent new cases, report abuse to police and stop potential abusers from entering the priesthood.

But campaigners say there is much still to be discovered about how the Church behaved in the past and want more bishops who were aware of abuse to be held responsible.

“Hundreds if not thousands of clerics have wrongly escaped incarceration due to the continuing secrecy of the Church and the issue being almost ignored by law enforcers,” Porteous Wood said. “Prosecuting authorities have some very awkward questions to answer, and not just in the U.S.”

Boston’s Cardinal Bernard Law resigned after scandals were exposed there but was named to a prestigious Church post in Rome. Mahony, who had already retired as Los Angeles archbishop, was stripped of his public ministry when files were opened there.

Victims’ groups have tried to establish a legal link between abuse cases in countries such as the United States and Germany and the Vatican, which in some cases appeared more concerned about protecting the Church’s image than helping the victims.

Before his election in 2005, Benedict headed the Vatican’s doctrinal office and took over handling of sexual abuse cases in 2001. Supporters say Vatican infighting kept him from responding decisively but he took a tougher stand once he was pope.

Critics say he failed to take effective action. “He publicly spoke about the crisis more than his predecessor but that alone is no achievement,” SNAP, an abuse victims’ advocacy group, said after he announced his resignation on Feb 11.

In 2010, Benedict was named as a defendant in a U.S. law suit alleging that he failed to take action as a cardinal in 1995 when he was allegedly told about a priest who had abused boys at a school for the deaf decades earlier.

The lawyers withdrew the case last year and the Vatican said it was a major victory that proved the pope could not be held liable for the actions of abusive priests in their dioceses.