The sex and power scandals haunting the Catholic Church look set to play a big role in meetings before next month’s papal election after two senior cardinals called on Tuesday for more internal debate about them. 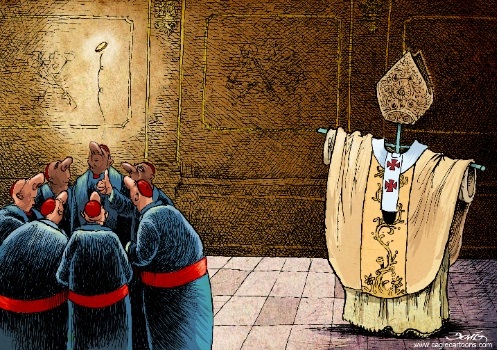 A leading support group for victims of clerical sexual abuse also made what it called a “last-ditch plea” to Pope Benedict to use his authority before resigning on Thursday to discipline bishops who have protected predatory priests in their dioceses.

The abuse issue took on new urgency after Scotland’s Cardinal Keith O’Brien, accused of improper behaviour with young priests, quit as Edinburgh archbishop on Monday and pulled out of the Sistine Chapel conclave to elect a new pope.

A Scottish Catholic Media Office spokesman has said O’Brien was taking legal advice and contested the “anonymous and non specific” allegations against him.

Cardinal Cormac Murphy-O’Connor, now the only British prelate due to attend pre-conclave talks among cardinals at the Vatican next week, said in London the sexual abuse of children was the most serious scandal in the Church.

“That will be one of the main things the cardinals will be discussing,” said Murphy-O’Connor, who cannot vote because he is over 80 years old but can join the cardinal electors in their closed-door discussions about the challenges for the next pope.

French Cardinal Jean-Louis Tauran said in a newspaper interview that the cardinal electors, who number 115 after O’Brien stepped down, should also be informed about a secret report on Vatican corruption prepared for Pope Benedict.

The retiring pontiff has decided to reserve the report for his successor, but the three cardinals over 80 years old who drew it up will be allowed to inform the cardinal electors about some of its findings during next week’s consultations.

“The cardinal electors cannot decide to choose this or that name to vote for if they don’t know the contents of this dossier,” Tauran told La Repubblica newspaper.

“If it’s necessary, I don’t see why they should not ask for names,” said Tauran, a former Vatican foreign minister who now heads its department for interreligious dialogue.

Italian newspapers have been speculating for days about conspiracies and alleged sexual scandals inside the Vatican that may have influenced Benedict to become the first pope in some six centuries to step down rather than die in office.

The Vatican has accused these newspapers of spreading “false and damaging” rumours in an attempt to influence the cardinals who are starting to arrive in Rome for the pope’s farewell meeting with them on Thursday.

Two directors of the United States-based abuse victims’ network SNAP arrived in Rome on Tuesday to draw attention to their demands for tougher Church policies.

“We’re here to make a last ditch plea to Pope Benedict to use the remaining hours of his papacy to take decisive action to protect kids,” said David Clohessy, national director of the Survivors Network of those Abused by Priests.

He acknowledged that Benedict had met some abuse victims and made some strong statements condemning the molestation of minors by priests, but said he only acted under public pressure.

SNAP saw no papal candidates ready to fire bishops for shielding wrongdoers, he said, but added: “It’s hard to believe there aren’t some cardinals who are grabbing their colleagues by the lapels and saying ‘We simply have to do better’.”

Spanish Cardinal Julian Herranz, one of the three who drew up the secret report for Benedict, echoed the Vatican attack on the media in an interview on Monday with the daily El Pais.

“This wanting to see snake pits, warring mafias, internal hatreds – all this is absolutely false,” he said.

Because conclaves are such secretive events, it is hard to see what effect the heightened public pressure over the abuse issue might have on the cardinals who will elect the next leader of the world’s 1.2 billion Catholics around the globe.

Italian newspapers, which dedicate several pages a day to the papal story, have begun mentioning Cardinal Sean O’Malley as a possible “clean hands” candidate because he was sent to Boston to deal with abuse scandals that erupted there in 2002.

But other factors could lead them to choose a man whose main strengths lie elsewhere, such as an aptitude to promote its “new evangelisation” drive, aimed at rekindling the faith in Europe and boost it in other regions.

Recent polls in two important national churches, in the United States and Germany, show that Catholics give their leaders low marks for their handling of the abuse crisis.

A Pew Forum poll last week showed U.S. Catholics have become increasingly critical, with those saying Benedict has done a poor job rising from 40% in 2008 to 63% now.

A survey in January for the weekly Die Zeit showed that only 28% of German Catholics polled believed the Church really wanted to clean up the mess the scandals have caused.