On April 11, Nicholas Coppola delivered over 18,000 signatures gathered through Faithful America to the Roman Catholic Diocese of Rockville Centre, asking that Nicholas be once again allowed to volunteer with his parish, after getting married to his husband. 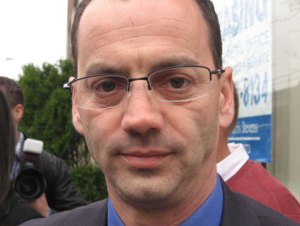 On April 23, Bishop William Murphy mailed them back, accompanied by one sentence:

“FROM YOUR FAITHFUL ROMAN CATHOLIC BISHOP.”

Seriously. You can see the cover letter here.

“I really don’t understand what sort of message Bishop Murphy is trying to send,” said Nicholas Coppola upon learning that the signatures were mailed back. “Is he no longer listening to the voices of the faithful? I have more questions than anything now.”

“Bishop Murphy owes Nicholas and the 18,000 people who’ve signed this petition a real answer, not a tactless ‘return to sender'” said Michael Sherrard, executive director of Faithful America. “I’ve never heard of a church official returning a petition like this without any kind of explanation.”

In January, Nicholas was informed by his priest that because he got married, he was to be removed from all parish activity, including altar server, lector, visitation minister, and religious education instructor. More than 18,000 people, including many Catholics, stood up in support of Nicholas, and asked that he be restored to his participation with the parish. Rather than speak with Nicholas, the Diocese dispatched security and would not allow Nicholas to enter the building. A security guard stated that he was to collect Nicholas’ petition and deliver it to the correct person.

Since that time, Nicholas has launched a second petition through Change.org, inviting Cardinal Timothy Dolan to break bread with him and listen to the story of at least one faithful gay Catholic. The petition comes in response to Cardinal Dolan’s admission to George Stephanopoulos that the Roman Catholic Church hasn’t “been too good” about not attacking gay and lesbian people. The Change.org petition has collected over 20,000 signatures to date.

According to canon law, the bishops must respond to letters that have been delivered. Later the same day that Nicholas delivered the petitions, the diocese issued a media statement reaffirming Nicholas’ ouster. It is unclear if returning the petition is the official response, per canon law.

“Nicholas Coppola is a faithful Catholic who loves his church, and he is now being treated like a threat by his own bishop,” said Ross Murray, GLAAD’s Director of News and Faith Initiatives. “Now more than ever, it is vital that Cardinal Dolan break bread with Nicholas to hear how he is being treated by the church that he loves so much.”

It’s time to replace shunning with real dialogue. Please join GLAAD in asking Cardinal Dolan to break bread with Nicholas Coppola so he can see that they are just like any other American Catholic family. Visit www.glaad.org/breakbread to learn more.

4 Replies to “In bizarre move, bishop who ousted gay catholic from parish rejects 18,000 signatures, sends them back”