By Joe Morgan
Archbishop of Zagreb Josip Bozanić is accused of forcing people to sign a petition against same-sex marriage, encouraging violence, and manipulating children into hating gay people. 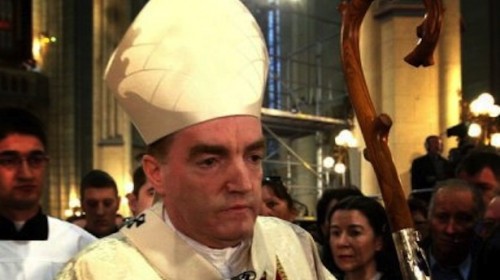 The Catholic Church in Croatia is corruptly coercing people to sign a petition against same-sex marriage, Gay Star News can exclusively reveal.

Over 710,000 people have signed the petition – over one fifth of the population of the Eastern European country – demanding the government change the constitution to say marriage is defined as between a man and a woman.

But gay rights activists have accused the Catholic Church of immorally manipulating the public into signing their names to oppose same-sex marriage and also of encouraging violence.

If a straight couple wants to be married in a church, or have their child baptized or attend a Catholic school, in many places they are being told they must sign the petition demanding a referendum to ban same-sex marriage in Croatia.

As over 85% of people are Catholic, the religion is deeply embedded in the Croatian culture.

Marko Jurčić, anti-discrimination coordinator for Zagreb Pride, spoke exclusively to Gay Star News about how the Catholic Church is using a ‘fear of change’ to take away human rights.

As Croatia readies itself to join the European Union on 1 July, there have been protests fearing the country will lose its identity like when it was part of Yugoslavia.

Jurčić believes it started when the Social Democratic Party of Croatia, the largest central-left party, took power in 2011.

When the party revealed their plans for unions for gay couples – ‘life partnerships’ – as well as sex education in schools and artificial insemination for single women, the Catholic Church struck back.

Josip Bozanić, the Archbishop of Zagreb, declared ‘war’ against the ‘radical liberalization’ of Croatia.

He successfully got the Constitutional Court to rule children should not be taught sex education in schools, saying it was a ‘violation of parent’s rights’.

Campaign group In the Name of the Family was set up to combat same-sex marriage.

Around 6,000 volunteers have been gathering signatures in over 2,000 locations in the last month. They have denied having backing from the Catholic Church.

Jurčić said it was not the first time a religious ‘war’ against LGBT equality has happened in Europe.

‘It started in France, and [the Catholic Church] lost there. Imagine what is happening east of Croatia!

‘It’s a new war they’re creating. One side is secular, the other religious.’

Jurčić described, after this happened, how there was an increase in hate crime as there were homophobic ‘signs and billboards and places to sign [the anti-gay] petition everywhere.’

He said: ‘People have been recognized by their gender expression or their sexuality and been beaten up. It’s a horrific atmosphere.

‘It has happened especially in Zagreb as there is a growing scene there. A lot of LGBT people have come to the capital looking for a haven, but they have been met with vicious attacks.’

He also alleged the Catholics started religious classes for children to teach them to hate gay, bi and trans people.

Jurčić said he was ‘furious’ by the treatment to the LGBT community especially as there were improvements in the last decade.

‘We’re not afraid. We have experienced a lot of change in this country since 2002, and we are all a part of the movement.

‘We changed the face of this country. It’s frustrating, it’s empowering how people have come out, how many public figures have supported us.’

The anti-gay petition will be handed to the Croatian government on Friday (14 June), a day before Zagreb Pride.

Zoran Milanovic, Croatia’s social democrat prime minister, has admitted there ‘probably ought to be referendum, provided all the preconditions are met.’

To amend the constitution, there must be a parliamentary majority of two thirds.

Jurčić hopes Saturday’s Pride will be an antidote, a breath of fresh air against the Catholic Church’s corruption.

‘Our role is to empower LGBT people who are being threatened in the hostile environment,’ he said. ‘We will continue to empower them, but the problem is the damage has already been done.’

When contacted by Gay Star News, the Croatian Catholic Church chose not to comment.