Colleen Simon insisted on performing her job this week out of devotion.

On Wednesday, she managed a delivery of 2,000 pounds of food for the pantry at St. Francis Xavier Church. It’s work she sees as fulfilling God’s will, his call to serve.

She couldn’t let the food spoil. 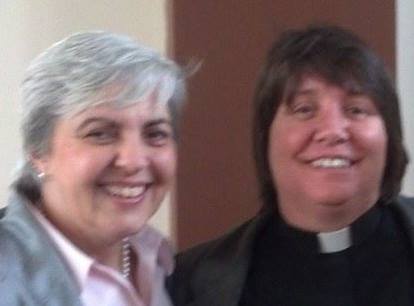 But apparently, that is not the way the Diocese of Kansas City-St. Joseph sees her role. Not anymore. Not after it was publicized that Simon is gay and married to another woman.

Simon’s job unraveled in a horrible confluence of unintended consequences that ran into the Catholic faith’s hypocritical stand on homosexuality.

Simon’s work as coordinator of social ministries was profiled April 30 in The Star’s 816 newsmagazine. The article highlighted Troost Avenue — its history and the many interesting people dedicated to its vibrancy today.

Colleen Simon and her wife, the Rev. Donna Simon of St. Mark Hope and Peace Lutheran Church, were mentioned deep in the story, along with the fact that they are a married couple.

The freelance writer didn’t intend to out the couple. They bear no grudge to her, nor to the priest currently serving St. Francis. The Simons have never hidden their marriage (in Iowa on May 19, 2012).

Rather, Colleen Simon kept a don’t-ask, don’t-flaunt attitude. She said she told the pastor who hired her in July 2013 (he is no longer at the parish) of her marriage. But day to day, she avoided pronouns that would highlight it, substituting “my spouse” or “my beloved.”

“You don’t want your legacy to be one of division and ugliness,” she said. “It’s awful. But there are laws, and until that law gets changed in the church, it is what it is.”

She says that in a series of emails and discussions that began last week, she was asked to resign. Colleen Simon believes that the order originated from Bishop Robert Finn.

Simon is Lutheran, but she spent decades as a Catholic. And it is through Catholicism’s strong ties to charity and justice that she’s reframed her life. She moved to Kansas City from Virginia, a step in a transition from a prior career as a pharmaceutical representative.

Hers was a pastoral role at St. Francis, which she understands makes a difference to the diocese. She took great pride in leading parishioners toward a more active role in the pantry.

She pressed for the congregation to not only offer food, but to examine systemic reasons for why people hunger. It’s the social justice role of faith, long embraced by the Jesuit-affiliated St. Francis Xavier, often in conjunction with its cohort on the east side of Troost, Rockhurst University.

Simon is devastated. But her refusal to resign, her insistence on being fired, is not a stand on principle. It’s pragmatic. She might need unemployment benefits.

In November, Simon will reach the milestone of being three years cancer-free from non-Hodgkin’s lymphoma. But many bills from her treatment remain unpaid. At 58, she worries about her ability to find a new job quickly.

She’s heartsick. But she says righteous indignation has no role here, not from her.

“I knew this was a losing engagement,” she said. “I was just hoping for a longer engagement.”

Many will find this episode shocking, believing that such discrimination is unheard of today. Headlines touting the acceptance shown to Michael Sam, the first openly gay football player on an NFL roster, are encouraging.

But important societal shifts happen by degree. Private struggles occur daily. Parents find themselves conflicted when a child comes out. Schools manage families fearful of a teacher who is believed to be gay.

And many religions grapple with balancing long-held dogma and God’s call to embrace all of humanity equally.

The church continues to fumble the fact that many within its flock — clergy, lay hires and parishioners — were created homosexual by God. They are people with talents to contribute. And they deserve not only God’s loving embrace but that of the faith’s leadership as well.