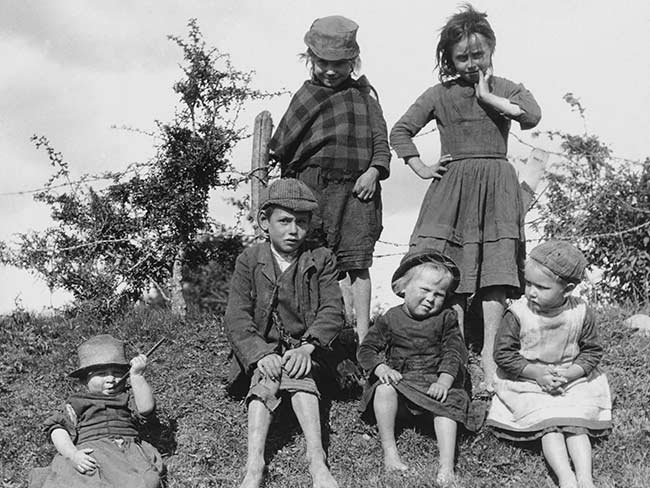 There is a growing international scandal around the history of The Home, a grim 1840’s workhouse in Tuam in Galway built on seven acres that was taken over in 1925 by the Bon Secours sisters, who turned it into a Mother and Baby home for “fallen women.”

The long abandoned site made headlines around the world this week when it was revealed that a nearby septic tank contained the bodies of up to eight hundred infants and children, secretly buried without coffins or headstones on unconsecrated ground between 1925 and 1961.

Now a local historian has stepped forward to outline the terrible circumstances around so many lost little lives.

Catherine Corless, the local historian and genealogist, remembers the Home Babies well. “They were always segregated to the side of regular classrooms,” Corless tells IrishCentral. “By doing this the nuns telegraphed the message that they were different and that we should keep away from them.

“They didn’t suggest we be nice to them. In fact if you acted up in class some nuns would threaten to seat you next to the Home Babies. That was the message we got in our young years,” Corless recalls.

Now a dedicated historian of the site, as a schoolgirl Corless recalls watching an older friend wrap a tiny stone inside a bright candy wrapper and present it as a gift to one of them.

“When the child opened it she saw she’d been fooled,” Corless says. “Of course I copied her later and I tried to play the joke on another little Home girl. I thought it was funny at the time.”

But later – years later – Corless realized that the children she taunted had nobody. “Years after I asked myself what did I do to that poor little girl that never saw a sweet? That has stuck with me all my life. A part of me wants to make up to them.”

Surrounded by an eight-foot high wall, Tuam, County Galway locals say that they saw little to nothing of the daily life of The Home or of the pregnant young mothers who arrived and left it without a word over the decades.

In the few surviving black and white photographs taken at the site no child is smiling. Instead they simply frown at the camera, their blank stares suggesting the terrible conditions.

A local health board inspection report from April 1944 recorded 271 children and 61 single mothers in residence, a total of 333 in a building that had a capacity for 243.

The report described the children as “emaciated,” “pot-bellied,” “fragile” with “flesh hanging loosely on limbs.” The report noted that 31 children in the “sun room and balcony” were “poor, emaciated and not thriving.” The effects of long term neglect and malnutrition were observed repeatedly.

Children died at The Home at the rate of one a fortnight for almost 40 years, one report claims. Another appears to claim that 300 children died between 1943 and 1946, which would mean two deaths a week in the isolated institution.

In The Home’s 36 years of operation between 1926 and 1961 some locals told the press this week of unforgettable interactions with its emaciated children, who because of their “sinful” origins were considered socially radioactive and treated as such.

One local said: “I remember some of them in class in the Mercy Convent in Tuam – they were treated marginally better than the traveler children. They were known locally as the “Home Babies.” For the most part the children were usually gone by school age – either adopted or dead.”

Because of Corless’ efforts we now know the names and fates of up to 796 forgotten infants and children who died there, thanks to her discovery of their death records when researching The Home’s history.

“First I contacted the Bon Secours sisters at their headquarters in Cork and they replied they no longer had files or information about The Home because they had left Tuam in 1961 and had handed all their records over to the Western Health Board.”

Undaunted, Corless turned to The Western Health Board, who told her there was no general information on the daily running of the place.

“Eventually I had the idea to contact the registry office in Galway. I remembered a law was enacted in 1932 to register every death in the country. My contact said give me a few weeks and I’ll let you know.”

“A week later she got back to me and said do you really want all of these deaths? I said I do. She told me I would be charged for each record. Then she asked me did I realize the enormity of the numbers of deaths there?”

The registrar came back with a list of 796 children. “I could not believe it. I was dumbfounded and deeply upset,” says Corless. “There and then I said this isn’t right. There’s nothing on the ground there to mark the grave, there’s nothing to say it’s a massive children’s graveyard. It’s laid abandoned like that since it was closed in 1961.”

The certificates Corless received record each child’s age, name, date – and in some cases – cause of death. “I have the full list and it’s going up on a plaque for the site, which we’re fundraising for at the moment. We want it to be bronze so that it weathers better. We want to do it in honor of the children who were left there forgotten for all those years. It’s a scandal.”

Corless believes that nothing was said or done to expose the truth because people believed illegitimate children didn’t matter. “That’s what really hurts and moved me to do something,” she explains.

During its years of operation the children of The Home were referred to as “inmates” in the press. It was believed by the clergy that the harsh conditions there were in themselves a form of corrective penance. The state, the church and their families all failed these women, Corless contends.

But even now the unexpected difficulty that the local committee Corless has joined to fundraise for a plaque to remember the dead children suggests that not everyone wants to confront the truth about the building’s tragic past.

“I do blame the Catholic Church,” says Corless. “I blame the families as well but people were afraid of the parish priest. I think they were brainwashed. I suppose the lesson is not to be hiding things. To face up to reality.

“My fear is that if things aren’t faced now it’s very easy to slide back into this kind of cover-up again. I want the truth out there. If you give people too much power it’s dangerous.”

Living and dying in a culture of shame and silence for decades, the Home Babies’ very existence was considered an affront to Ireland and God.

It was a different time, some defenders argued this week, omitting to mention that the stigmatizing silence that surrounded The Home was fostered by clerics. Indeed the religious orders were so successful at silencing their critics that for decades even to speak of The Home was to risk contagion.

And now that terrifying era of shame and silence is finally lifting, we are left to ask what all their lonesome suffering was in aid of, and what did it actually achieve?

To donate to the memorial for the mothers and babies of The Home, contact Catherine Corless at catherinecorless@hotmail.com.