Faced with tough questions under oath last month, former Twin Cities archbishop Harry Flynn said at least 134 times that he could not remember how he handled clergy sexual abuse cases during his 13-year tenure, according to documents made public Wednesday. 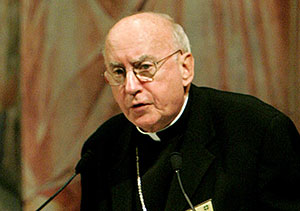 Flynn, 81, retired six years ago. He said he didn’t have dementia or other diagnosed memory problems. “I think it has more to do with age than anything,” he said, although he noted that he has been diagnosed with cancer, pneumonia and Legionnaires’ disease.

The former archbishop said he did not report any accusations of child sexual abuse to police and doesn’t recall asking anyone else to report abuse claims, either, according to a transcript of the May 14 deposition released by victims’ attorneys. Flynn claimed no memory of a high-profile lawsuit brought in the mid-1990s by a man who said he was abused by the Rev. Robert Kapoun. The case attracted national attention at the time.

Flynn testified as part of a lawsuit filed by a man who says he was sexually abused by the Rev. Thomas Adamson as a child in the 1970s. The man claims the Archdiocese of St. Paul and Minneapolis and the Diocese of Winona created a public nuisance by keeping information on accused priests secret. The broad claim has allowed the man’s attorneys, Jeff Anderson and Mike Finnegan, to question archdiocese officials about decisions from the 1970s to the present. The archdiocese has also been forced to turn over thousands of internal documents on abusive priests.

Flynn’s deposition was all the more striking because he led the national response to the clergy abuse scandal in 2002 and helped write the U.S. Catholic Church’s policy on abuse. In the Twin Cities, where Flynn served as archbishop from 1995 to 2008, he reassured parishioners many times that he had taken tough steps to protect children from abusers.

Under oath, Flynn testified that he spent a lot of time outside of the archdiocese handling the national crisis and delegated authority to archdiocese attorney Andrew Eisenzimmer and then-vicar general Kevin McDonough. “It’s unfortunate that we did not pay more attention to this as a result,” he said of the archdiocese cases.

Anderson questioned Flynn about his interactions with Archbishop John Nienstedt, who replaced him in 2008.

Nienstedt said under oath in April that he couldn’t remember key abuse cases and never provided complete files to police. He also claimed that McDonough told him not to write down some information on abusive priests for fear it could be uncovered in a lawsuit.

Flynn testified that he didn’t recall any similar advice from McDonough and doesn’t remember any situation in which he declined to write down information.

Flynn said he didn’t recall whether he received a list of offenders from his predecessor, Archbishop John Roach. He said he didn’t know why he refused to release the names of priests “credibly accused” of child sexual abuse.

Flynn said that although he couldn’t recall most abuse cases, he did recall some details about an incident involving the Rev. Joseph Gallatin, a priest who went on leave in December.

He said Gallatin touched someone on the shoulder “with his finger only” during a camping trip. It was an “inappropriate touch” but not abusive, Flynn said.

Internal records reviewed by MPR News showed that Gallatin admitted that he rubbed the chest of a teenage boy under his shirt while he slept in a bunk bed on the camping trip. Gallatin explained that he wanted the boy to stop snoring but later admitted that the incident provided sexual gratification.

Flynn said he doesn’t recall whether he investigated the Gallatin incident but doesn’t think he restricted Gallatin’s ministry at the time.

The archdiocese announced Gallatin’s leave from the Church of St. Peter in Mendota, Minn., in December because of “a single incident of inappropriate conduct with a minor many years ago involving a boundary violation.”

Flynn has declined interview requests in the past and could not be reached for immediate comment. The Archdiocese of St. Paul and Minneapolis declined to comment, according to spokesman Jim Accurso.

Under oath, Flynn explained that he provided payments because “in justice, we needed to give them some provision” for retirement and housing.

“I felt very strongly that they would not be able to get jobs very easily, and so I wanted to give them some help,” he said.

Flynn said he provided a “financial agreement” for the Rev. Gilbert Gustafson, a priest who pleaded guilty to child sexual abuse in 1983, “but I don’t recall what it was.”

Anderson, the victims’ attorney, asked, “What message do you think that sends to the victims that he’s abused that he’s receiving payments for having victimized them?”

“What message do you think that sends to the victims that he’s abused that he’s receiving payments for having victimized them?”

“I don’t know, but what message would it send to the world if we threw these people out in the street without any difficulty, without any assistance?” Flynn said.

“If they were thrown into jail and reported to the police, that would send a powerful message, wouldn’t it?” Anderson said.

“And if the files that were maintained on Gustafson or other priests who had offended were made available to law enforcement, that would also send a powerful message, wouldn’t it?” Anderson said.

“Why hasn’t it been done? Why haven’t the files been turned over to the police?”

Flynn couldn’t recall after the national abuse scandal in 2002 whether he had determined if any of his priests had been “credibly accused” of child sexual abuse.

Flynn also claimed not to remember specific allegations against the Rev. John Brown, the former director of the archdiocese’s Boy Scouts program, who has been accused of sexually abusing boys in Waverly, Minn.

When Anderson challenged Flynn’s recollection of the priests, the former archbishop said he didn’t know the process for defrocking priests.

Flynn also testified that didn’t know the Rev. Clarence Vavra, a priest who admitted in the mid-1990s that he tried to rape a boy on an Indian reservation in South Dakota in the 1970s.

MPR News reported last fall that no one reported Vavra to police or warned the public. Vavra stayed in ministry until 2003.

After Flynn claimed no knowledge of Vavra, Anderson pulled out a memo that Flynn received from his top deputy, McDonough, in 1996. It said psychological testing had found that Vavra was sexually attracted to teenage boys.

Confronted with the memo, Flynn said he thought Vavra’s ministry was restricted amid the national abuse scandal in 2002.

• Archdiocese knew of priest’s sexual misbehavior, yet kept him in ministry (Sept. 23, 2013)

Flynn said Wehmeyer “never came on my radar as a potential risk of harm to children.” He said he only knew that Wehmeyer “had a same-sex attraction.”

Some people told him that Wehmeyer wasn’t friendly, Flynn recalled. “There wasn’t anything that gravely concerned me … They just wanted him to loosen up a bit.”

The review found “borderline illegal” pornographic images, according to internal documents obtained by MPR News, but the archdiocese did not call police. Archdiocese chancellor Jennifer Haselberger discovered the images on several disks at the chancery. She notified law enforcement in 2013 shortly before she resigned in protest of the archdiocese’s handling of abuse cases.

Two police investigations last year found no evidence of child pornography on disks retained by the archdiocese, but police cast doubt on the findings.

The archdiocese’s internal report found that Shelley had searched the Internet for the terms such as “blond boys sucking pics.”

Flynn testified that he couldn’t recall reading the private investigator’s report and denied knowledge of Shelley’s Internet search terms. He said McDonough told him that Shelley’s computer did not contain child pornography.

“I don’t know anything about computers,” he said. “And I’ve heard from people you can push things and things will come up, or push them accidentally.”

Anderson also asked Flynn about an abuse investigation into the Rev. Francisco “Fredy” Montero, a priest from Ecuador who returned to his native country amid a criminal investigation into whether he sexually abused a four-year-old girl.

Flynn said he thought that police had “cleared” Montero before he returned to Ecuador.

However, a document turned over by the archdiocese as part of the lawsuit shows that Flynn knew the investigation hadn’t been completed.

Auxiliary Bishop Richard Pates and Hispanic ministry coordinator Anne Attea explained the situation in a July 12, 2007 letter to a bishop in Ecuador and copied Flynn.

“While no charges have been filed and the child has not made any incriminating overture to the police, the case is still under investigation,” they wrote.

A man came forward in 2002 to accuse Dudley of sexually abusing him when he was an altar boy at Annunciation Church in Minneapolis in the 1950s, according to media reports. Two women also accused Dudley of misconduct. One woman claimed Dudley acted inappropriately toward her in a public place in the 1960s. Another woman said Dudley sexually abusing her when he was the pastor of Our Lady of the Lake in Mound, Minn., in the mid-1970s, according to a 2003 Star Tribune report.

Flynn hired a private investigator to review the allegations, according to statements by the archdiocese at the time. In February 2003, Flynn announced that the investigation found no evidence to support the claims of the three accusers. Dudley denied the allegations.

Under oath last month, Flynn said Dudley had been accused of dancing with a teenage girl and had been “exonerated.” He called it “the most ludicrous accusation that could have been made about anyone.”

Flynn did not mention the other allegations against Dudley.

Anderson asked Flynn about how he handled allegations against the Rev. Michael Keating, a professor at the University of St. Thomas who went on leave last fall shortly before he was sued for alleged sexual abuse of a teenage girl in the 1990s. The alleged victim’s parents went to the archdiocese years earlier, and Flynn said he doubted the woman’s allegations.

“I was quite disturbed because the mother and father kept putting words into her mouth,” he said.

He said he was “suspicious” of the woman’s parents. “I don’t know why, but I was,” he said.

Flynn said McDonough, his top deputy, disclosed information about the Keating case to Don Briel, the director of the Center for Catholic Studies at the University of St. Thomas. The Universityannounced Briel’s retirement last week amid an internal investigation into what he and others knew about the claims against Keating.

The archdiocese’s clergy review board deemed the allegation unsubstantiated but recommended that Keating not mentor young adults. Flynn testified that he cannot remember whether he followed the board’s recommendation to restrict Keating’s ministry.

Flynn resigned as president of the University’s board of trustees last fall as the clergy sexual abuse scandal widened. He testified that he “did not want my association with the board to hut St. Thomas in any way.”

Former top deputies the Rev. Peter Laird, McDonough, and former archdiocese official Robert Carlson, now the Archbishop of St. Louis, also testified under oath in the past two months. Laird testified that he told Nienstedt he should resign.

In his deposition, Flynn declined to criticize Nienstedt and wouldn’t say whether he thinks the archbishop should release all information on accused priests. “I don’t get my views since I retired,” Flynn said.