While Tony Perkins, Brian Brown, Bryan Fischer, and other Christian Right pundits of the more shrill variety may be easy to ignore as they demand a right to discriminate on Fox News, there is a more dangerous coalition emerging. One of the primary drivers of the movement to corrupt and redefine religious freedom isn’t someone in a shouting match on cable news, but a decades-long alliance of top Mormons and Catholics. 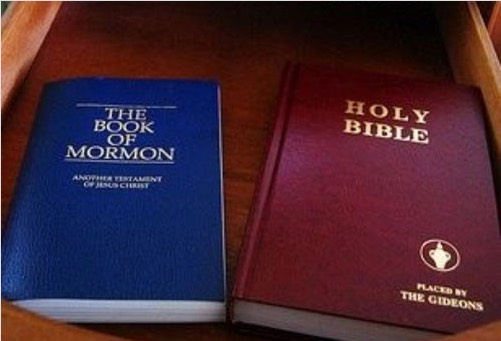 While Mormons and Catholics may seem like unlikely allies, from a political perspective they bring complementary strengths to their partnership.

The Mormon Church has an amazing amount of wealth on hand (it’s estimated to be worth over $40 billion – gathered from real estate and commercial holdings, mandatory tithing collections from members, and even a theme park in Hawaii) and a world-class grassroots mobilization and recruitment force.

The Catholic Church and related groups, on the other hand, enjoy a much higher approval rating with the American public (62 percent) and thus can put a more popular face on public political campaigns.

The political allegiance between Mormons and Catholics dates back at least to the 1990s in Hawaii, during the first U.S. battle over same-sex marriage. As I previously reported, while the Mormons could — and did — provide funding and volunteers to that campaign, the more popular Catholic Church acted as the coalition’s public face.

The Catholic Church and other visible allies would thereby absorb any public backlash directed towards the coalition, while the Mormons could push their agenda without any serious consequences to their public image. The strategy was effective, and one they repeated during California’s Proposition 8 fight.

The alliance grows stronger with each passing year. Epitomizing the relationship is Princeton professor Robert P. George, one of the most influential Catholic conservative activists in the country, who partnered with the Mormon Church to create the National Organization for Marriage (NOM). He also joined the editorial advisory board of the Mormon Church-owned newspaper, the Deseret News.

George is also the founder of the Witherspoon Institute (responsible for the debunked Mark Regnerus study – which was reported first by the Deseret News), was the primary author of the anti-LGBTQ Manhattan Declaration, and is one of the top national strategists leading the charge to redefine religious freedom into a sword religious institutions can use to force their doctrinal positions on individuals.

Last week, Mormon Church-owned Brigham Young University awarded George an “honorary Doctor of Law and Moral Values” degree, calling him “one of the most able and articulate advocates of the proposition that faith and reason are not incompatible.”

Dallin H. Oaks, one of the Mormon Church’s 12 Apostles, has been deeply involved in the effort to redefine religious freedom. He sits on the board of the World Congress of Families, an international culture-warring collection of Religious Right organizations that works all over the world to use (redefined) religious freedom arguments to enact anti-LGBTQ and anti-reproductive health laws (such as the Russian law that criminalizes any positive speech about homosexuality).

In recognition of his work with WCF and frequent speeches before conservative groups extoling the benefits of using one’s faith as an excuse to dodge pesky civil rights laws, Oaks received the 2013 “Canterbury Medal” for his “defense of religious liberty” from The Becket Fund for Religious Liberty, a conservative Catholic legal organization responsible for the Hobby Lobby ruling at the Supreme Court and one of the top groups in the Right’s religious freedom campaign.

“Speaking of ‘concerns that the LDS and Catholic communities share,’ such as ‘about marriage and family, the nature of our sexuality, the sanctity of human life, and the urgency of religious liberty,’ he [Chaput] said this: ‘I want to stress again the importance of really living what we claim to believe. That needs to be a priority—not just in our personal and family lives but in our churches, our political choices, our business dealings, our treatment of the poor; in other words, in everything we do.’” Chaput continued, in his speech to BYU, “Religion is to democracy as a bridle is to a horse.”

Another of the Mormon Church’s top leaders, Henry B. Eyring, met with Chaput and Pope Francis in November 2014 at the Vatican. Eyring described their strengthening alliance and mutual dedication to opposing civil liberties for LGBTQ people and women, saying “I think the thing was, even with other faiths, they have exactly the same feeling that the root of good society is good families.”

The crowning, and perhaps most insidious, achievement thus far of the Mormon-Catholic alliance is the much-hailed Utah nondiscrimination/religious freedom law. While the Christian Right’s state-level Hobby-Lobbyized RFRAs (with their overt anti-LGBTQ intentions) have generated a significant national backlash (particularly in the cases of Indiana and Arizona) and are susceptible to court challenges, the Utah RFRA “lite” law actually won endorsements from LGBTQ groups.

The Mormon Church enlisted the help of Christian Right operative Robin Fretwell Wilson, who works closely with right-wing Catholic groups like The Becket Fund and Alliance Defending Freedom, to co-write the law. The end product was a bill written in such a way that LGBTQ groups hungry for a “win” in a Red state could claim victory in the form of a watered-down nondiscrimination law.

The price — knowingly or otherwise — was the endorsement by high-profile LGBTQ groups of the Right’s false contention that religious freedom is somehow at odds with LGBTQ rights, requiring a compromise – or, as some LGBTQ groups described the creation of Utah’s law, “a collaboration.” Such endorsements have set a dangerous precedent for the advancement of RFRAs and other efforts to corrupt actual religious freedom in various state legislatures.

Right-wing groups can (and do) point to LGBTQ support in Utah as a means of mainstreaming their agenda and deflating their opposition.

Catholic news agencies have hailed the “Mormon law” as a model to be repeated across the country. If that happens, we may well see more such pyrrhic victories, in which gains in non-discrimination legislation are overwhelmed by the emerging “right to discriminate” on the basis of religious convictions. This is where compromising on the true meaning of religious freedom could lead.

We may also see the Mormon Church emerge as a more prominent—albeit less public—partner of the evangelical and Catholic elements of the Christian Right as they continue their quest to corrupt the meaning of religious freedom.
Complete Article HERE!