Skutt Catholic High School declined to renew the contract of teacher and speech coach Matt Eledge after he told them he was getting married to a man. He said school officials told him he’d have to end the relationship to keep his job.

In March, Skutt Catholic High School speech coach Matt Eledge led his team to their fourth consecutive state championship. Pictures from the day show the group of students, from Nebraska, beaming and clutching a huge gold trophy with Eledge in the center.

But soon after those photos were taken, school officials told Eledge his contract would not be renewed for the following school year. The decision came after Eledge informed the school that he and his partner, Elliot, were planning on getting married.

Eledge told BuzzFeed News that he realized he could lose his job if he married another man – but he hoped the school, overseen by the Archdiocese of Omaha, would overlook it.

“I had a thought, maybe they will make this work out,” he said.

But, according to Eledge, the school wouldn’t budge.

Now, former and current students, parents, and other community members are rallying behind Eledge and petitioning the school to allow the beloved teacher to remain at the school.

“A living example of what it means to be a SkyHawk, Mr. Eledge has spent hundreds of hours striving to make sure that the students at Skutt have an incredible high school experience,” an online petition reads. “He soars above the rest in accolades, talent, and character for Skutt Catholic.”

The petition has nearly 68,000 signatures as of Tuesday.

Eledge said his experience teaching and coaching at Skutt has been everything he had hoped his career would be. He said he considers the Skutt community a family.

“It’s a job that I feel gives me joy and gives me meaning,” he said.

But he was later told by the administration that if he wanted to return to the school, he would have to end his relationship with his partner.

Officials from Skutt told BuzzFeed News they could not comment on employment matters. However, the school defended its decision to not ask Eledge back in a letter to its school community.

“If a staff member cannot commit to Catholic Church teachings and doctrines, he or she cannot continue to be on staff at Skutt Catholic,” the school president John F. McMahon said in the letter, which was reviewed by BuzzFeed News. “As a Catholic school we stand firmly with the Archdiocese of Omaha and our Catholic church in the support and upholding of the Church’s teachings as they are defined.”

Eledge said he was completely shocked by the request. But he was also surprised by the petition, started by former student Kacie Hughes.

Hughes, who is now a student at the University of Nebraska-Lincoln, told BuzzFeed News that if Skutt wants to fire Eledge for being gay, they would need to fire every other teacher who has broken any Catholic teaching.

Hughes said she thinks Skutt should “follow in the footsteps of Pope Francis and realize that this is no longer 1950.”

“Times are changing, and they need to get with it,” she said. “I started this petition to make a difference, which is something that my alma mater Skutt Catholic instilled in me.”

The 28-year-old was hired at Skutt after graduating from college and said he realized the implications of working at a Catholic school as a gay man.

At the time he was young and single and happy to be working, he said, but he knew he never could be open with who he really was.

“It always was a bit fearful for me to work in that environment,” he said.

Eledge said that as part of their contract, teachers at Skutt must agree to “support the teachings of the Catholic church.”

Deacon Timothy F. McNeil of the Archdiocese of Omaha told BuzzFeed News that the school would not renew the contracts of teachers who conduct themselves in “violation of Catholic Church teaching.”

“Teachers know what they are getting into and accepting when they sign the contract,” he said.

A federal judge struck down Nebraska’s same-sex marriage ban, but an appeals court stayed that decision – keeping the ban in place until further legal arguments are made.

Eledge said in practice he operated on a so-called “Don’t ask, don’t tell” policy. He never spoke openly spoke about his sexuality at work, even after he began dating his partner, Elliot, a few years ago.

But in 2014, Elliot’s mother was diagnosed with Stage 4 cancer. Eledge said that although he and Elliot had talked about marriage before, they decided to go ahead with it so that she could be at the ceremony.

Along with the petition, former and current students and others are also showing support for Eledge on social media using the hashtag #LetMattTeach. 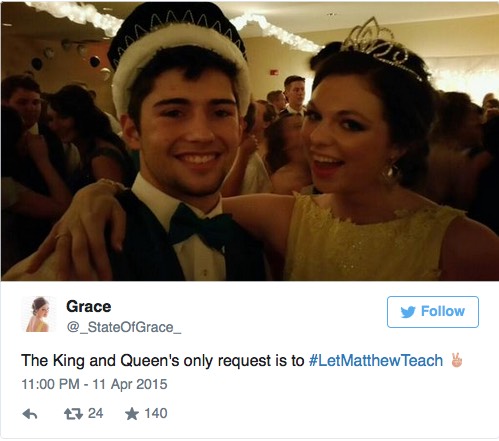 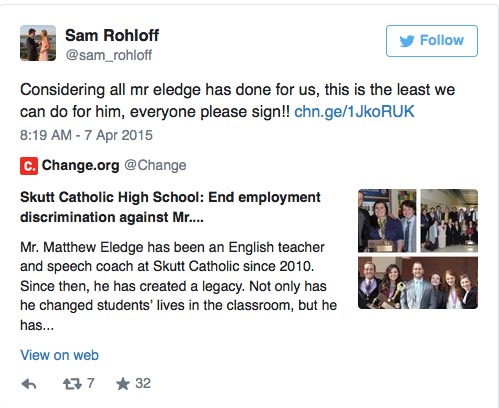 Eledge said he was reluctant at first to address the issue because he wanted to make sure he wasn’t just speaking with his “ego.”

However, he said, he’s come to realize that his story has “represented something way bigger.”Eledge said both he and Elliot are “more than anything totally and 100% moved and humbled and in awe of the way people are reaching out.”

“The support from the community has made me feel very loved and accepted,” he said.

Eledge said that he is not sure what the future holds for him. He will continue to teach at Skutt until the end of his current contract in May, and he said he has been exploring possible future teaching opportunities.

However, he said it breaks his heart to leave his students and team, which is a community that he considers family.

“Despite some of the pain from this situation,” he said, “I love and care about everyone at my school.”