One of France’s most prominent cardinals knew about a pedophile priest abusing young Catholic Scouts—and now the alleged cover-up will be tried in secular courts. 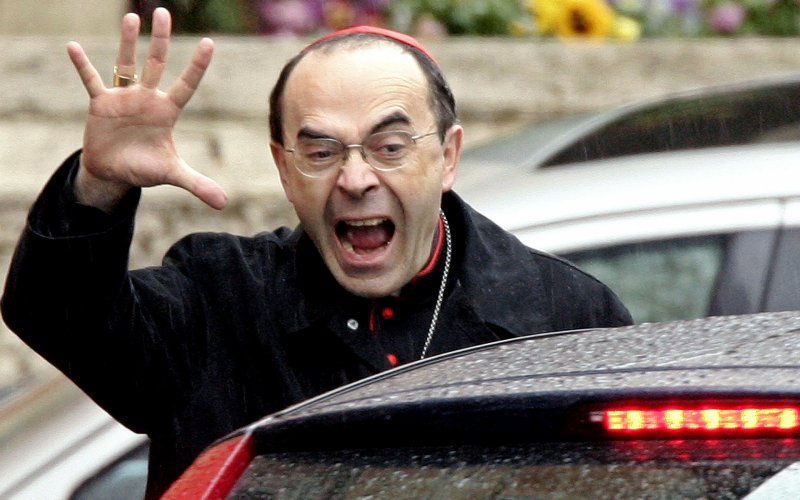 For all those who say that the Catholic Church is doing all it can on clerical child sex abuse—namely the Vatican press office—there is yet another reason to doubt those lofty words. Meet the Archbishop of Lyon, Cardinal Philippe Barbarin, who has denied he did anything wrong by hiding the well-known fact that Father Bernard Preynat was sexually abusing as many as 40 Catholic Scouts in France in the late 1980s and early 1990s.

Preynat was relieved of his duties in the parish of Roanne in 2015 after admitting to the sex abuse. He was indicted on Jan. 27 on charges of “sexual abuse and rape of minors” and has admitted his crimes to the police.

The 45 Scout victims who lodged the complaint that led to Preynat’s arrest share horrifically similar stories of abuse. “He would say ‘tell me you love me’. And then he would say ‘you’re my little boy,’ ‘it’s our secret, you mustn’t tell anyone,’” one of Preynat’s victims said, according to criminal trial reports.

A victim named Pierre-Emmanuel Germain-Thill described to Euronews how the priest preyed on the young boys. “What shocked me the most was when he tried to put his tongue in my mouth. He stroked my genitals, I couldn’t avoid it,” Germain-Thill said, according to press reports.

“I wanted to run away, and at the same time, I didn’t know what to do, I was afraid that if I left that room, nobody would believe me.”

Another victim, Bertrand Virieux, told Euronews, “I remember the smell of sweat, I remember contact with clothes. I remember his wandering hands under my shirt, which held me tightly against him.”

Meanwhile, Cardinal Barbarin is facing criminal charges by a French secular court for “failing to report a crime” and “endangering the life of others,” which could carry a three-year prison sentence and fines up to €45,000. He maintains that he shouldn’t be accused at all because he eventually removed Preynat from parish work.

Never mind that the removal came nearly 15 years after his crimes were made known. After victims and their families came forward in 1991, Preynat was removed him from parish duties for six months by the then-archbishop, who is now deceased. Yet despite having confessed to the crimes, Preynat was allowed to return to his active duties after he repented, meaning he had access to children despite admitting to being a pedophilic sex offender.

When Barbarin was appointed as archbishop, he even promoted the errant priest to an administrative position in 2007 where he was in charge of six dioceses filled with children, according to court documents quoted in the French press.

Barbarin, who is well liked in France despite his harsh stance against gay marriage (which he once predicted would pave the way to legalized incest), removed Preynat from the priesthood last August when secular authorities got involved—25 years after his crimes had first emerged.

The cardinal is now arguing that he should not be criminally charged because he was not archbishop at the time of Preynat’s crimes, and that he did eventually remove the priest from active duty. But it is not enough to remove an errant priest from a parish or even defrock him, argue victims groups. David Clohessy, head of the Survivors Network of Those Abused by Priests (SNAP), says any child sex-abuse offender should be turned over to secular authorities immediately and should be remanded in prison whether they wear a clerical collar or not.

The Vatican has always rightly maintained that pedophiles are not restricted to the priesthood. But the difference has always been that abusers in every other sector, from education to medicine, almost always immediately face secular court justice. There are no other professional institutions that systematically hide predators from authorities to the same extent the Catholic Church does. As the Oscar-winning film Spotlight showed, the complicity of not only the clerics but often the entire community—under pressure from the powerful Catholic churches that support community activities and run schools—is why the cycle is still so hard to break, despite the Vatican’s efforts.

That’s why when cases like Barbarin’s make it to the secular court, they underscore just how rare that action is. And that’s why when Australia’s Royal Commission into Institutional Responses to Child Sexual Abuse held Cardinal George Pell’s feet to the fire several weeks ago—for his alleged oversight of abuse in that country—victims were angry that it took so long to happen.

“The depositions of Cardinal Pell before the Royal Commission as part of its inquiry carried out by live connection between Australia and Rome, and the contemporary presentation of the Oscar award for best film to Spotlight, on the role of the Boston Globe in denouncing the cover-up of crimes by numerous pedophile priests in Boston (especially during the years 1960 to 1980) have been accompanied by a new wave of attention from the media and public opinion on the dramatic issue of sexual abuse of minors, especially by members of the clergy,” he said in a statement.

“The sensationalist presentation of these two events has ensured that, for a significant part of the public, especially those who are least informed or have a short memory, it is thought that the Church has done nothing, or very little, to respond to these terrible problems, and that it is necessary to start anew. Objective consideration shows that this is not the case.”

Lombardi went on to outline the various commissions and extensive work Francis and his two predecessors have accomplished, including meetings with survivors and the formation of guidelines and recommendations for clergy. But there was no mention of how the Church regularly reports its abusers to the secular justice system—primarily because it doesn’t. And there was little mention of the secular world at all beyond two references to “legal” procedures—one in Ireland and the other in Australia.

He also pointed to the Vatican’s new tribunal to try those accused of or affiliated with the cover-up of rampant sex abuse, along with an advisory committee on sex abuse, headed by Cardinal Sean O’Malley, the Archbishop of Boston who replaced Cardinal Bernard Law, who resigned in shame in 2002 and whose blatant disregard for victims of sex abuse made him the central figure of Spotlight.

But as the Associated Press pointed out last week, the Vatican’s recent efforts are “going nowhere fast.” Josef Wesolowski, the 67-year-old former papal nuncio to the Dominican Republic, who was the only person ever slated to face the tribunal, died suddenly in Vatican City before his trial began.

What’s most troubling in Barbarin’s case is that Pope Francis made promises last September during his American trip that he would see to it that any bishops who were involved in the cover-up would be forced to resign. “You must not cover up, and even those who covered up these things are guilty,” Francis told reporters on his plane back to Rome.

So why is Barbarin not being forced out? Preynat’s lawyer, Federic Doyez, told the French judge that Barbarin knew about the abuse. “The facts had been known by the church authorities since 1991,” he said.

An unidentified source close to Barbarin told the AFP that Francis was surely talking about someone else. “This comment does not in any way target Cardinal Barbarin who quite rightly suspended Father Preynat after meeting a first victim and taking advice from Rome, and this, even before a first official complaint was made.”

Victims groups will be watching the events closely to see if French justice will set a precedent for other countries. “The pope’s refusal to honor this promise is yet another reminder that keeping kids safe in the Catholic Church is a burden that increasingly falls on brave victims, secular authorities and church members—especially whistleblowers,” says Barbara Dorris, SNAP’s outreach director.

On the third anniversary of Pope Francis’s historic election, March 13, many will be praising the success and popularity of the pontiff. But three years into the job, it remains certain that the pope’s promise to do something about the continuing clerical abuse and cover-up leaves little to celebrate.