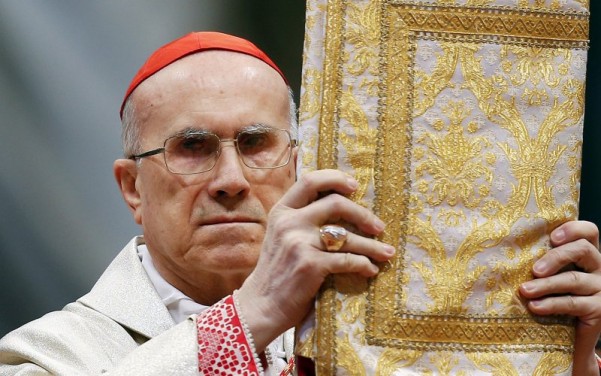 A top Vatican cardinal is defending a glitzy renovation to his private apartments, apparently funded by money meant for a children’s hospital.

It is hard to imagine two men more different than frugal Pope Francis and the Vatican’s former spendthrift secretary of state Cardinal Tarcisio Bertone. The Pope lives in a spartan 750-square-foot apartment inside the Vatican’s modest Santa Marta guesthouse. Cardinal Bertone, meanwhile, is caught up in a spending scandal surrounding lavish renovations for his penthouse apartment nearly 10 times that size.

Bertone—who served in the Vatican’s No. 2 position as secretary of state from 2006 until Francis essentially retired him in 2013—decided to combine two vacant Vatican-owned rooftop apartments for himself and his three service nuns at an estimated cost of around half a million euro, which was discounted by 50 percent, according to official estimates published by the Italian newspaper Il Tempo.

But despite the considerable savings, the renovations were apparently paid for twice, meaning the discount was likely down to creative—or corrupt—accounting, which is being investigated by a Vatican Tribunal that opened a criminal dossier into the matter last week.

According to journalist Emiliano Fittipaldi, who first broke the news of Bertone’s lavish penthouse being funded by a children’s hospital in his book Greed last year, the renovation cost was funneled through a London-based holding company run by Bertone’s personal friend. “The money destined for sick children was in actuality used for the renovations and then sent on to London,” Fittipaldi wrote. “Bertone’s name is not cited in the magistrates’ document but the Holy See will find it hard to overlook his direct involvement in the scandal.”

Bertone says he can prove he paid around $340,000 for the work out of his own pocket, but the foundation that raises money for the Vatican-owned Bambino Gesu children’s hospital apparently also paid $455,000.

No matter who paid for what, or even where the money came from, it must surely be an embarrassment to Francis that his churchmen are not following his pleas for frugality. By any standard of measure, Bertone’s apartment renovations are over-the-top. According to the estimates that were published in the Italian press, each of the bedrooms has its own private bathroom, and the kitchen facilities are befitting a banquet hall. Bertone spent $22,000 on “eight independent sharable audio programs and audio controls with LCD display for each environment.” That essentially boils down to a sound system where each room in the lavish apartment, including the rooftop chapel, can be programed with its own mood music. This, for a prelate and three nuns who have no official role whatsoever in Francis’s church.

The massive-for-Rome apartment is being floored with 2,400 square feet of expensive herringbone oak parquet which cost the cardinal and the hospital $28,000. A smaller 750-square-foot area is being covered with luxury white Carrara marble at a price tag of $11,000. The double-glaze energy efficient windows cost $80,000 and the front security door is priced at $6,000.

According to deputy director of the Vatican press office Greg Burke, the hospital’s former president Giuseppe Profiti, and its former treasurer Massimo Spina, who were in charge of allocating funds for Bambino Gesu Hospital, are being criminally investigated for misappropriating funds meant for sick children.

Bertone is not under investigation—not yet anyway. But he quickly gave $170,000 to the children’s hospital in December. “It is a donation that reflects my sentimental attachment to the hospital and its little patients,” he said at the time of his generous donation.

The hospital president, Mariella Enoc, apparently didn’t see it quite that way. “Acknowledging that what has happened has been detrimental to the Bambino Gesu, Cardinal Bertone wanted to meet us half way, donating a sum of 150,000 euros,” she said when the donation was made.

Bertone has been on the defensive since the allegations first came to light, pointing out that “scores of other prelates live in even nicer apartments.” In fact, both Nuzzi and Fittipaldi gave examples of countless other cardinals whose lifestyles are in stark contrast to the way Francis has chosen to live. “The apartment is spacious, as is normal for the residences in the ancient palaces of the Vatican, and dutifully restored (at my expense),” he wrote on a blog attached to the diocese of Genoa that he ran before being promoted to secretary of state. “I may temporarily use and after me it will benefit someone else. In the words of the Pope Saint John XXIII, ‘I do not stop to pick up the stones that are thrown at me.'”

Fittipaldi, along with another journalist Gianluigi Nuzzi, are currently on trial for publishing leaked documents they were allegedly given by a Spanish Cardinal and pregnant public relations consultant. Their trial, dubbed Vatileaks II, after the first Vatileaks trial saw Pope Benedict XVI’s butler guilty of leaking documents to Nuzzi, picks up again on April 6.