The former Music Director at the Church of St. Mary in Providence is speaking out, after being fired on Monday because he said “of the person I love”  — his male partner, whom he married in 2015.

In a statement posted to Facebook on Tuesday, Michael Templeton, who resides in Warren, spoke to a conversation with church clergy that he said was “bizarre, unprofessional, and inappropriate,” which led to his firing as Music Director at the Catholic church, where he served for more than five years.

“What I can tell you about the conversation, is that from what I’ve read, is it’s consistent with the other situations I’m aware of around the country — that they say because of the public nature of your ministry, and the inconsistency of your life choices, that we are requiring your resignation,” Templeton told GoLocalProv.com on Tuesday.

“My heart breaks because this brings to light what ‘safe’ means to people. I feel this action represented more than me in my role. It represents people who have been marginalized and thought of as ‘less than’ for a whole host of reasons,” said Templeton. “I came to St. Mary’s for what it is and who they welcome, whether they come from reformed lives of addiction, or come from divorce and are remarried, whatever the reason.  I want to be clear — I did not resign, I was relieved of my duties.”

The church did not respond to request for comment on Tuesday.

Templeton spoke to his path to Rhode Island, and the role that Catholicism — and music, and education — has had had in his life.

“I went to St. Bonaventure for college. The Franciscan Friars there encouraged me to take a position at St. Francis [in downtown Providence],” said Templeton. “I was the Director of Adult Education and Music, which really brought me to this area.”

Templeton spoke to his degree in elementary education, which brought him briefly back to his home state of New York for a job in the public education system there, before he decided to return to Rhode Island.

“I came back to Rhode Island for the slower pace of life,” said Templeton. “I’ve been [at St. Mary’s] since I came back five years or so ago. At that time, their music director had quit unexpectedly and the pastor at the time invited me to come on board,  so I wanted to do right by the community.  A lot folks were there from the St. Francis days.”

Templeton said he was aware that his marriage to his partner in 2015 could put his position in jeopardy, but that he didn’t see it coming.

“What I can say is that I am aware of Catholic educators and administrators around the country facing this — I’ve seen this happen to some colleagues in the music ministry, and they’re all heartbreaking stories,” said Templeton. “These are people giving their best, they’re faith-filled Catholics. It chips away a little each time.”

Templeton said that his had not hidden his life, or his partner, while at the church.

“I have worked hard to live a life of integrity, which means never hiding,” said Templeton. “So it’s 2016. We all have to be concerned about our well-being. Yes, it’s an integral part of me, but only part of me — I’ve been fortunate to do things that I love with the talents and gifts I have.”

When asked what he would say to Catholics who say that homosexuality — and gay marriage — are against the tenets of the church, Templeton offered the following.

“What I can I say? People need to follow their heart. I feel strongly I give the best I can and what that means is bringing people closer to God through music,” said Templeton. “I pray for those people to follow their heart and conscience. The God I believe in is a merciful God. The Pope has called us to a year of mercy and I invite people to heed that call.”

In 2013, Pope Francis had publicly said, “Who am I to judge?” when asked about the possibility of gay clergy in the Catholic church.

“What I would say about that quote, and I don’t know its context, is regardless of what issue we talk about, it is central to the Pope’s message,” said Templeton. “There’s only one person that we’ll need to answer to at the end of it all.”

“I’ve been overwhelmed by the outpouring of love and support,” said Templeton, following his dismissal. “Friends from high school, college, have all left amazing messages.  I’m not a media person, I’m not seeking attention. I just want to open the conversation again. I hope people keep their faith, hold their heart, and keep the conversation going on this.” 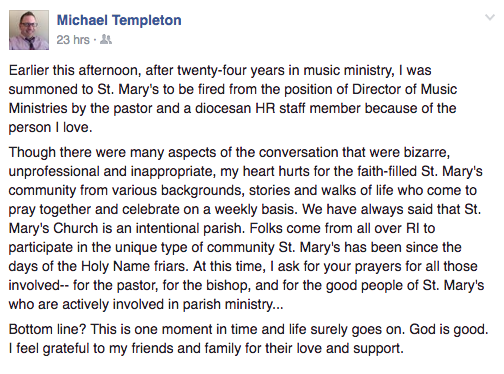