A religion teacher at one of the city’s most prestigious private high schools said he was harassed and threatened by students after they found his online dating profile — and then he was fired by the school.

Matt Tedeschi, who taught religious studies at St. Ignatius College Prep in Little Italy, said students found out he was gay and “outed” him to the rest of the school — then went on to harass him about his sexual orientation in the classroom and on social media.

Tedeschi, who taught for about four years at the school, said he believes he was then fired because his sexual orientation conflicts with some Catholic teachings, and the incident — and ensuing gossip — embarrassed top leaders at the elite school. He was slated to be considered for tenure in the fall.

“In this place that prides itself on being a value-based school and teaches us to care for the vulnerable and marginalized, it’s precisely the same religious basis that allows horrible harassment to take place,” he said.

In a statement released Thursday, St. Ignatius leaders said Tedeschi was not fired from school because of his sexual orientation. Previously, St. Ignatius administrators declined to directly address Tedeschi’s firing and subsequent allegations, but said that the teacher “was treated fairly” by the school’s administrators.

“Saint Ignatius College Prep must respect the confidentiality of the term of employment of its present and former faculty and staff members,” school spokesman Ryan Bergin said in a statement. “Although I cannot comment on Mr. Tedeschi’s claims regarding his prior employment at Saint Ignatius College Prep, I can assure you that he was treated fairly at all times by the administration of the school, and we wish him all the best in his future career.”

Tedeschi, who was raised in the Catholic faith and graduated from Marist High School, a coed Catholic high school in the Mount Greenwood neighborhood, studied religion at the University of Illinois in Urbana-Champaign before earning a master’s degree in biblical studies from Yale Divinity School. In August 2013, he was hired to teach religious studies at St. Ignatius, the school he had dreamed of going to when he was a teen.

“In a lot of ways, I fell in love with it all over again when I became a teacher there,” said Tedeschi, 31. “I was really pleasantly surprised by how bright these [students] are.” 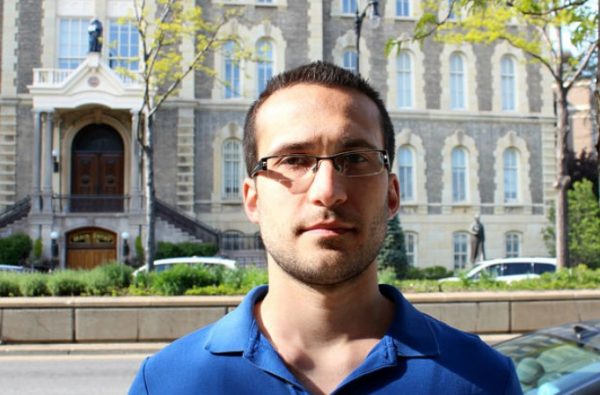 Two years ago, the school expanded Tedeschi’s responsibilities, and he began teaching French classes in addition to religion classes.

“Matt was known as being a really tough teacher, but he was really good” at his job, a former colleague said. “Most of the kids really enjoyed him — he was very smart, witty.”

And while Tedeschi described the students as generally “very polite,” his experience at the school changed in February 2016, when a student “outed” him to the student body after finding Tedeschi’s profile on OKCupid, an online dating website.

Tedeschi had never discussed his sexual orientation in the classroom, he said, and the online dating profile did not list his name or that he was a teacher at the school. The profile, which said he is interested in men, features three photos, including one which portrayed him shirtless.

“Never once did I think a high schooler would be on it,” he said of the dating website for those 18 and older. Other teachers at St. Ignatius have online dating profiles, he said, including profiles on OKCupid.

“Everyone should have the right to a private life,” Tedeschi said.

“He ‘outed’ me to a bunch of students. He knew that he was making fun of me and insulting me,” Tedeschi said. “He wanted to embarrass me.”

Discussing the profile in a group text message that Tedeschi obtained screenshots of, one student wrote: “Wow. This is SOOO juicy.”

“He was sort of cyberbulled by some of our students,” said one of Tedeschi’s former colleagues who spoke on the condition of anonymity.

When Tedeschi found out the student had seen his profile, he said he told two administrators hoping they would take action to stop the bullying from students. At first, the administrators “were supportive,” he said, and brought the issue to St. Ignatius Principal Brianna Latko. Tedeschi talked to the students after the incident, but the students were ultimately not punished, he said. Latko did not respond to emails seeking comment.

“It was a horrible environment for me,” he said, and students continued to harass him.

In April 2016, one of Tedeschi’s students went on a 16-tweet tirade about him, writing on Twitter: “Let’s not forget I have screenshots that can end you.” The student attached a photo from Tedeschi’s dating profile.

Tedeschi said the student’s tweet was “public blackmail” and “a threat” that declared Tedeschi could be fired because he is gay.

Tedeschi brought the student’s tweets to the principal, and asked for him to be punished. The student received two Saturday detentions, Tedeschi said.

Tedeschi said administrators could have prevented “the culture of harassment.”

“They were just watching it play out,” he said. “I was having anxiety attacks before I went to class. It just completely undermined my authority as a teacher and made me feel small. … This unnecessarily pitted me against my students, which never should have been the case.”

The harassment from students continued to happen in his classroom this school year, Tedeschi alleged, but he continued teaching.

Then, during a class this spring, a student unexpectedly shared sensitive information involving other students. Tedeschi said he didn’t know the student was going to share the information, told her she should report it to the administration and also reported the incident himself to a counselor at the school.

Latko subsequently called Tedeschi out of class to discuss the incident, and reprimanded him for “allowing the discussion to go on,” he claimed. St. Ignatius administrators declined to answer questions about the incident.

Later that week, in March, the principal informed Tedeschi that St. Ignatius was not going to renew his contract.

The school gave him the opportunity to finish out the school year, but after he discussed his departure with a colleague, the school called him to say that his employment was being terminated immediately. In exchange for the rest of his salary he would have earned over the semester, school administrators urged him to sign a nondisclosure agreement, but Tedeschi declined, he said.

Tedeschi said he was told he was being fired because he showed poor judgment posting photos online and didn’t stop the classroom conversation involving the sensitive information. He said he was also told he was negative and undermined authority — although administrators declined to elaborate to him on these charges or provide further details in writing.

He said that no one told him directly that he was fired because of his sexual orientation.

St. Ignatius administrators declined to answer DNAinfo’s questions about why Tedeschi was fired, but in a statement released Thursday said the teacher was not fired because of his sexual orientation.

Tedeschi contends he received positive reviews from the school’s leaders in his four years at St. Ignatius, and his employee file contained no disciplinary complaints.

Tedeschi said he believes he was really fired because he is gay and the school was embarrassed by the “outing” and subsequent fallout. He also believes the school administrators fired him “in retaliation” for complaining about the harassment he experienced at the school.

St. Ignatius administrators declined to answer general questions about the school’s hiring practices, specifically whether they hire, and allow, gay teachers to work at the school.

“The questions that you raise touch upon issues that are taken seriously by our school,” Bergin said in a statement. “Saint Ignatius College Prep has as its core mission a diverse community dedicated to educating young men and women for lives of faith, love, service and leadership. Through outstanding teaching and personal formation, the school challenges its talented student body to intellectual excellence, integrity, and life-long learning and growth. Inspired by the gospel of Jesus Christ, this community strives to use God’s gifts to promote social justice for the greater glory of God.”

Tedeschi said that he was “outed” to the school through no fault of his own and that if St. Ignatius doesn’t want to hire gay teachers, the school’s policies should explicitly express that. While the Jesuit school is part of a “more open-minded order,” some leaders at the school believe that same-sex relationships conflict with Catholic teachings, he said.

“It’s a ‘don’t ask, don’t tell’ policy, because they are worried about negative fallout,” he said. “I never would have taken this job if I thought this could happen to me.”

“I don’t think he was necessarily targeted [from the beginning] because he was a homosexual male, but because there was too much attention being called on Matt being gay,” the source said. “It was creating too much trouble” for the administration, the former colleague said.

“The fact that he was fired still leaves me scratching my head,” his former colleague said. At a school that preaches social justice, “Matt tried to advocate for himself, and he was [reprimanded] for it until he was told to leave.”

In September 2015, a St. Ignatius College Prep teacher was placed on administrative leave after allegations of “inappropriate conduct” surfaced at the school. That teacher no longer teaches at St. Ignatius, according to school sources. 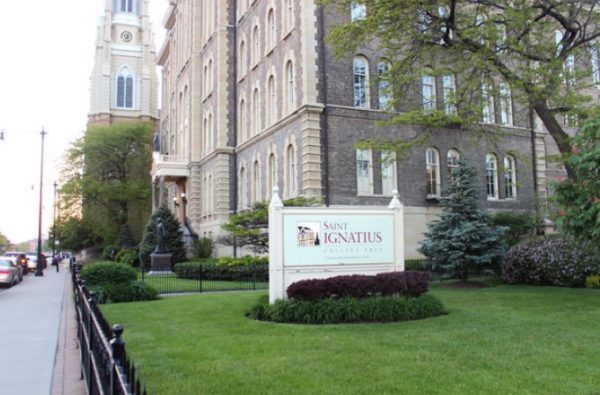 Since his firing, Tedeschi said he is exploring legal options to fight his termination, and he wrote an open letter to the Ignatius community that he posted online.

Juan Perea, a Loyola University law professor who specializes in employment law, said religious institutions are afforded some employment exemptions under the law, including a ministerial exemption that states that churches and other religious institutions can discriminate against others in favor of hiring Catholics over non-Catholics, for example.

Under the exemption, ministers are not protected under Title VII of the Civil Rights Act of 1964, which states that an employer can’t hire or fire a person based on an individual’s “race, color, religion, sex or national origin.”

By the Equal Employment Opportunity Commission’s definition, ministers can include employees “that conduct religious ritual, worship or instruction.”

Under federal law, it is a relatively new finding that sexual orientation can count as a form of sex discrimination, Perea said. For decades, the federal circuit courts regularly rejected claims of LGBTQ discrimination under Title VI.

But the U.S. EEOC’s view of sex discrimination began to change under the Obama administration, and the U.S. Court of Appeals for the 7th Circuit — the court that governs Chicago — agreed last month that a lesbian professor can bring a lawsuit against her former employer Ivy Tech Community College.

“The law is changing right now on all of these issues,” he said.