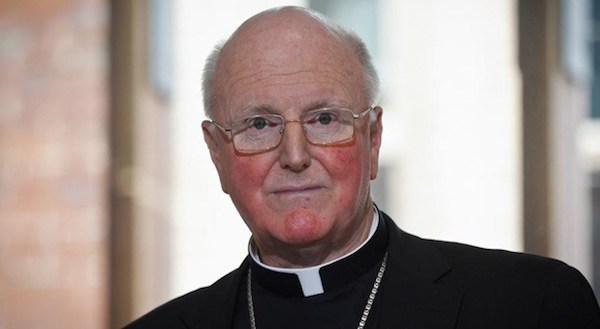 by The Kavanagh Sisters

Yet again we come across an article about the highest echelons of the Catholic Church published by the Indigenous America and shared on facebook this week that makes no sense to any right minded individual.

What are we to conclude from such statements made by Australia’s most powerful clergy, Archbishop of Melbourne Denis Hart who made his comments in response to a report by the Royal Commission into Institutional Responses to Child Sexual Abuse who proposed 85 sweeping changes to the criminal justice system and recommended that priests face criminal charges for failing to report serious crimes such as sexual abuse to the police.

Hart responded, saying ‘he’s prepared to be jailed for failing to report child sex abuse by paedophile priests.’ He insisted that sexual abuse was “a spiritual encounter with God through the priest” and was “of a higher order” than criminal law. He went on to say that “Outside of this, all offenses against children must be reported to the authorities, and we are absolutely committed to doing so.”

How can anyone make these statements with impunity, and with such conviction? How are we allowing this?

I feel sorry for the real priests and I know there are many who bought “the dream” but for the rest of them, things need to change.  People seem to forget and it is not that long ago, certainly in my childhood how much damage the church is responsible for. They stole from us at the very deepest level, behaving as if they themselves where God.   They assumed control over our thoughts and behaviours, telling us every Sunday from the pulpit how bad we were.  They took responsibility from us for our own morality, our bodies, filling us with shame and guilt around normal bodily functions.

They presumed to tell women in particular what they could and could not do with their bodies.  Men did not escape because although they sent them the message that they were more important than women through the sexual act (telling women they had to fulfill their marital duties) men still had to feel shame around their own natural bodily functions.  They ensured every man woman and child struggled with their sexuality and in my opinion the church is solely responsible for more than just the sexual abuse they inflicted upon the world from within but also created the perfect environment for the sexual abuse that runs rampant through our society’s today.

When are we going to realise that we do not need these frocked men to access or communicate with Our God.  For me the church represents a past filled with fear, oppression, shame, guilt, control, domination, rules and restrictions…… hang on a minute …… isn’t that the highest level of abuse….  and yet here we are still listening to these dinosaurs.

When you think about it, these men hiding behind the label of religion have caused so much pain and suffering without ever taking responsibility, manipulating the words in the Bible in order to allow them to do whatever they want.

The church’s response to handling allegations of abuse has in my opinion sealed the deal.  I would have more respect for them if they would have put their collective hands up and repented as their religion endorses, instead they have consistently attempted to avoid at all costs ownership of any wrong doing, making them responsible yet again for even more pain and suffering.   Where is the love their religion urges us mere mortals to demonstrate to one another?  The church did such a monumental job manipulating and brainwashing us, taking advantage of people’s goodness that as a result some people are still afraid to stand up and say when something just isn’t right.  I for one am glad that their dictatorship has come to an end….. They are just having trouble accepting it.