When Dan McNevin was nine years old, he served as an altar boy to Father James Clark in Corpus Christi Church in Fremont, California. There he worshipped alongside generations of his Irish Catholic family, attending mass and answering phones for the parish office. At first, says McNevin, now 60, Clark was “grooming him.” But soon the priest began to abuse him both physically and emotionally, undressing, touching, and assaulting him. He didn’t tell anyone, including his parents, for more than a decade. After three years, McNevin left the church forever; Clark did not.

Decades later, McNevin, then in his forties, confronted Clark’s superiors in the Oakland diocese, which governs all Catholic churches in the Alameda and Contra Costa counties, including Fremont. He says the area bishop told him the priest did not have a history of abuse, although he was a convicted sex offender, and denied shuffling him between posts (one way the Catholic church protects alleged abusers). McNevin believed the diocese—until he learned that the leaders of the same diocese had transferred a different offender 11 times. Then, in 2002, he met a survivor who had been molested by Clark five years after his own abuse. “I knew I got lied to,” he says. McNevin sued the Oakland diocese alongside several other victims, settling in 2005.

He works now as an area leader for the Survivors Network of Those Abused by Priests (SNAP), a grassroots non-profit organization dedicated to helping victims of clergy abuse deal with their trauma. For survivors who’ve kept their abuse secret, media coverage publicizing the offender’s crimes can be both triggering and validating. It’s a duality McNevin is himself familiar with: He still remembers the first time he saw his abuser’s name in print—once when he sued the church, later when he was quoted in an article detailing the church’s complicity in Clark’s crimes. The most recent of these came earlier this week, when the law firm Anderson & Associates published a report identifying 212 priests accused of sexual abuse in the Oakland, San Francisco, and San Jose dioceses.

“It’s validating to see his name yet again in lights,” McNevin says. This time, Clark’s name was included in a list of hundreds of alleged abusers, published for all of California to see. Advocates say compiling names—even those previously known—can help identify patterns of clergy sex abuse and cover-up. “It is believed that the Bay Area Dioceses do not make available to the public the full history, knowledge, and context of the sexually abusive clerics,” the firm wrote in the report. “This report is intended to raise awareness.” 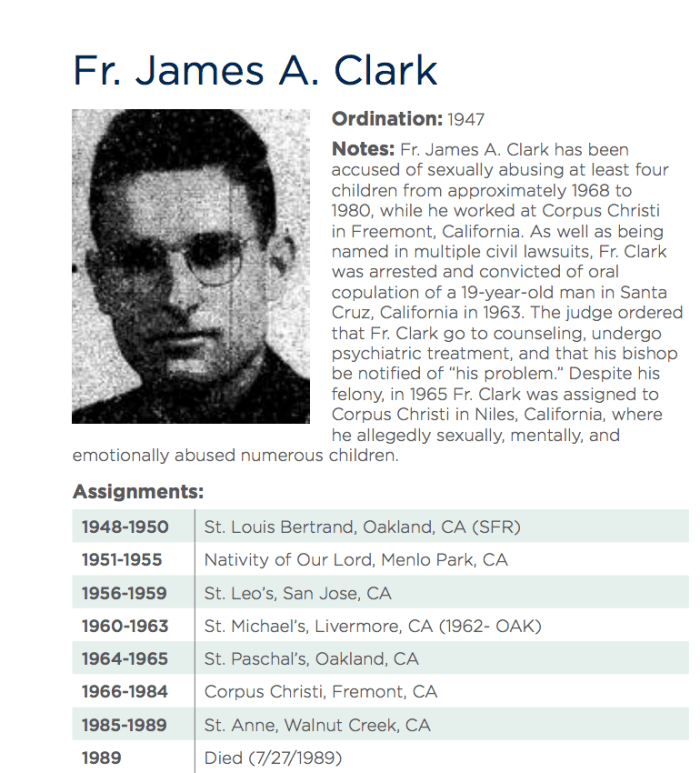 The work histories compiled in the firm’s report show that, after Clark’s felony charge in 1963, the priest was reassigned three times. This is how he ended up at McNevin’s Fremont church, where he “allegedly sexually, mentally, and emotionally abused numerous children,” the report says. Between 1948 and his death in 1989, he had been moved to seven different posts across the state.

In the months after the Pennsylvania grand jury report put clergy abuse back in the national spotlight, Anderson & Associates has been leading the effort to name names in California, home to more than 10 million Catholics. The Minnesota-based firm published another report in early October, accusing 307 priests of abuse in Los Angeles. It’s also representing survivor Tom Emens, who filed a civil lawsuit this month against 11 dioceses, naming every single bishop in the state of California.

“This lawsuit is designed to require each of them to come clean, to actually tell the truth about what they know,” attorney Jeff Anderson said in a press conference on Tuesday. He called the cover-up of clergy sex abuse in California, where parishes relocated some abusers more than 20 times, “a conspiracy of silence and secrecy.”

The inner workings of this conspiracy are extensive, Anderson says: Some bishops have chosen to believe priests over their victims; work histories show the movement of abusers across the state, many with prior convictions; and the Vatican has long compelled its dioceses to secrecy.

The Bay Area list more than doubles the number of abusers that the three dioceses have so far acknowledged, according to SNAP. And yet lawyers and advocates agree it’s still far too low. The majority of incidences of sexual assault go unreported, and that’s especially true in the case of clergy abuse. (The Pennsylvania investigation found that up to 8 percent of priests in the state abused children.) But research shows most survivors of clergy sex abuse wait decades to report, if at all; many face stigma and fear of backlash in their community, as well as the ongoing trauma of abuse, and, often, a crisis of religious belief. One 2008 study found that less than 5 percent of cases were reported within a year. In California, where 29 percent of the population is Catholic, McNevin estimates that as many as 2,000 priests could have abused thousands of children.

Some bishops have already tried to downplay these numbers by claiming they are not responsible for the actions of order priests, such as Jesuits or the Franciscans, who were working and living in the diocese at the time of abuse. “The alleged incidents occurred, and the reports of abuse were made, in other jurisdictions and were not shared with the Diocese of San Jose,” the diocese said in a statement on Wednesday, the Mercury News reports. Anderson, meanwhile, says his firm will push back on this excuse. “That is a deceit and a deflection,” he says.

The church also argues that few of these names are new. All of the information in Anderson’s report comes from public records, when dioceses were forced to disclose the identities of offenders in 2002. Most of the allegations, the report says, have not been “proved or substantiated in a court of law.”

But much of this abuse has been common knowledge in the Catholic community for years, says Melanie Sakoda, a Bay Area volunteer with SNAP. She believes the renewed attention could have a real impact, either forcing the church to disclose more information, drawing out more survivors, or prompting an attorney general investigation like the one in Pennsylvania, which uncovered 300 abusers and thousands of victims. (A spokesperson for California Attorney General Xavier Becerra says it cannot “comment on, even to confirm or deny, a potential or ongoing investigation,” although local reports in San Jose suggest Becerra is looking into investigating the issue.)

While some trauma stems from ensuing media coverage around highly publicized issues of abuse, publishing names can also be an important part of the healing process. “When a survivor sees the name of his or her molester named, that person begins to experience some validation,” McNevin says. “That might cause them to report what happened to them. That report, in turn, attracts other reports, which eventually snowballs into a virtuous cycle for survivors of clergy sex abuse.”

Tom Emens, suing bishops across the state, hopes to kickstart this cycle. Standing beside Anderson at the press conference, he told those listening, including Sakoda and other members of SNAP: “This is probably the hardest thing I’ve ever done as a victim and survivor. It’s also the most necessary thing I can do for the people of California.”

Whatever happens, McNevin hopes these efforts will help expand the list. His abuser was named in multiple civil lawsuits, arrested, and convicted. Other survivors have never experienced this kind of validation.

“The Catholic faith calls for confession and penance,” McNevin says. “I expected to go into that church and into the chancery and to have the leaders of this church, who are the bishop and his senior priest and his staff, give me the full story—to do their penance.”

McNevin is no longer a practicing Catholic. But he’s still waiting for his diocese to do its penance—for the hundreds of likely survivors still waiting to see their abusers’ names on a list.