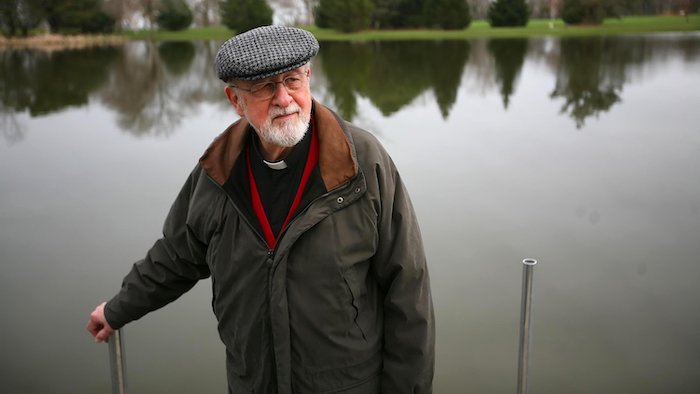 Victims of clergy sexual abuse in the Milwaukee Catholic Archdiocese are questioning the decision to hold a funeral mass for former Archbishop Rembert Weakland at St. John’s Cathedral.

Weakland died last week in Greenfield at 95 after a long illness.

He was at the center of a clergy sexual abuse scandal in May 2002, when the church revealed there were six active priests in the archdiocese with histories of sexually abusing children.

“I’m doing my best to eradicate it. That’s what I’m doing,” Weakland said at a public meeting in Brookfield.

Days later, he made national news.

ABC and WISN 12 News broke the story of Weakland paying nearly $500,000 to a man to stay quiet about their sexual relationship while the man was a student at Marquette University in the late ’70s.

“He was sitting next to me and then started to try to kiss me and continued to force himself on me and pulled down my trousers and attempted to fondle me. Think of it in terms of date rape,” said Paul Marcoux in 2002.

The Vatican accepted Weakland’s resignation the next day. He had reached his mandatory retirement age of 75.

Years later, Weakland claimed during a deposition that he didn’t realize the scope of the clergy sex abuse problem until the mid-1980s.

“And it became clear to me that this wasn’t just something I had bumped into a few times in Milwaukee, but a national phenomenon that had to be dealt with,” Weakland said.

But it’s Weakland’s practice of shielding priests known to have sexually abused children that survivors of clergy sexual abuse say disqualifies him from the honor of a cathedral funeral Tuesday.

“He would not look us in the face. He would not talk to us,” said Peter Isely Tuesday in front of the cathedral.

“So I want to say that this man being buried Tuesday is unrepentant. He died unrepentant for the harm that he caused. And no mercy. He had no mercy on us whatsoever,” Isely said.

Retired priest Father James Connell said holding the funeral at the Cathedral is “rubbing salt in the wounds” of clergy sexual abuse victims.

“I call for all Catholic clergy in the archdiocese, all bishops, priests and deacons to stay away from the funeral tomorrow,” Connell said.

The Archdiocese of Milwaukee said current Archbishop Jerome Listecki was out of town Monday and unavailable for comment.

When WISN 12 News asked why Listecki chose to have the funeral at the cathedral, a spokesperson responded in an email that “It’s important to keep in mind that the Cathedral is the parish of the archbishop.”

“A funeral Mass is not a glorification of a person’s life, but rather an act of mercy for the dead during which we pray that, despite any failings in life, they may be received by a merciful God. We pray for all sexual abuse survivors and hope they can now find healing and peace,” said the statement.

The mass is scheduled to begin at 4:30 p.m. Tuesday. Weakland will be buried at St. Vincent Archabbey Cemetery in Latrobe, Pennsylvania.