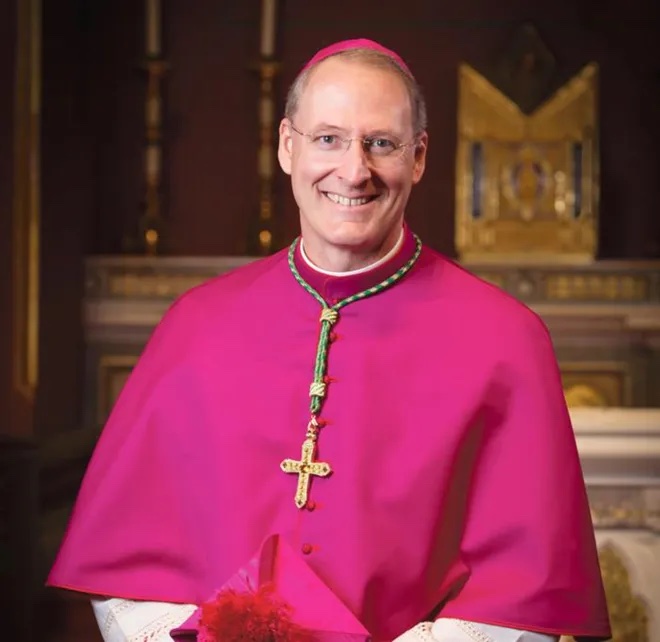 A lawsuit filed this week alleges a Catholic bishop in Detroit who previously was a Vatican ambassador sexually assaulted a 12-year-old boy 25 times decades ago in Massachusetts.

According to the suit filed Monday in Boston, Archbishop Paul Fitzpatrick Russell, 63, currently one of five auxiliary bishops in the Archdiocese of Detroit, raped the boy while Russell was a priest in the Archdiocese of Boston from 1989 to 1990. Pope Francis appointed Russell, formerly the Vatican’s ambassador to Turkey and Taiwan, to be a Detroit bishop in May and he assumed office last month.

Tuesday evening, the Archdiocese of Detroit announced that Russell would be refraining from all public ministry.

The alleged victim, who is now in his mid-40s and not named in the lawsuit, was a member of Saint Mary of the Sacred Heart Parish in Lynn, Massachusetts, the complaint said.

In a statement to the Free Press, the director of public affairs at the Archdiocese of Detroit, Ned McGrath, said: Archbishop “Russell is shocked and saddened by the claims that have been made, and states that his conscience is perfectly clear. He holds in prayer all those who have ever been victimized by a member of the clergy.”

About 6 p.m. Monday, the Archdiocese of Detroit issued a statement on its website that said it was not aware of the allegations against Russell when he was appointed in May by Pope Francis to be a bishop in Detroit.

The Archdiocese added that it “offers its prayers for all victims of clerical abuse and their families.”

The lawsuit was filed by attorney Carmen Durso against the Archdiocese of Boston; Russell, and Russell’s supervisor at the time, Ronald Gariboldi, pastor at the church that the plaintiff attended.

The lawsuit says the Archdiocese and Gariboldi either knew of, or should have known about the alleged sexual assaults.

They “should have known that defendant Russell was not fit to be retained in a position in which he would have access to young children,” the complaint reads.

Reached by phone Tuesday, Gariboldi referred questions to the Archdiocese of Boston.

Terrence Donilon, secretary for communications in the Archdiocese of Boston, told the Free Press: “We have just learned of the lawsuit. Given it is a pending legal matter, we will withhold comment at this time.”

Durso has represented many victims of sexual abuse over the decades, including in legal cases 20 years ago on behalf of victims of Boston Catholic clergy abuse. In 2002, the Boston Globe published articles that drew national attention to the issue of abuse of children by Catholic priests, resulting in a number of civil and criminal cases.

The lawsuit filed this week claims that the Archdiocese of Boston and Gariboldi “knew multiple acts of sexual abuse by priests of the Archdiocese were occurring but conspired to keep this from becoming public knowledge,” which “made it possible” for Russell to carry out the alleged assaults.

The plaintiff “has been seriously and permanently injured, and, at the present, continues to suffer from a psychological disease that impairs and affects all aspects of his life,” the complaint said.

Born in Massachusetts, Auxiliary Bishop Russell moved in the third grade with his mother to her hometown of Alpena, Michigan, after she divorced, according to the Archdiocese of Detroit.

He attended Alpena High School before entering St. John’s Seminary in Boston and was ordained as a priest in 1987. Russell served five years in parish ministry and one year as a personal secretary to then Cardinal Archbishop Bernard Law.

Law was the archbishop at the time of the alleged assaults. He resigned in 2002 after reports he was covering up the sexual abuse of children in other cases.

Russell has served as a diplomat representing the Catholic Church in Turkey, Taiwan, Zimbabwe, Ethiopia, Switzerland, Turkmenistan and Nigeria, according to the Archdiocese of Detroit and news media reports.

In 2008, Pope Benedict named Russell as chargé d’affaires of the Apostolic Nunciature in Taiwan, a role he served for eight years. In 2016, Pope Francis appointed Russell as apostolic nuncio to Turkey and Turkmenistan, and gave him that same year the title of archbishop. In 2018, Russell also became ambassador to Azerbaijan.

“I am so happy with Pope Francis’ decision to send me home and look forward to serving as an auxiliary bishop in the Archdiocese of Detroit and immersing myself in the mission and ministry of the local Church in southeast Michigan,” Russell said in May after being named a bishop in Detroit.