I had thought that by now, 2012, it was impossible to be shocked by an example of episcopal moral idiocy regarding the sexual abuse of minors. For every bishop like Cardinal Sean O’Malley of Boston, who has self-evidently tried to do the right thing by the victims of this horror, there is a grand jury report, actually two, in Philadelphia cataloguing indifference or worse. For every archdiocese like Washington, where three consecutive archbishops – Hickey, McCarrick and Wuerl – have handled accusations of abuse with swiftness and justice, there is a diocese like Kansas City-St. Joseph, which is under criminal indictment for failing to follow civil law, let alone moral law. And for every brave and decisive bishop like Wilton Gregory, who as chairman of the USCCB in 2002 refused to ignore the gravity of the crisis or accept half-measures to face it, there is a bishop like Fabian Bruskewitz who still refuses to even permit an audit of his diocese’s compliance with child protection procedures. As I say, I thought I was beyond shock. 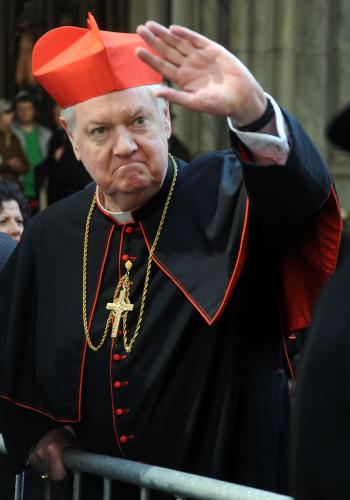 But, then I read the recently published interview in Connecticut Magazine with Cardinal Edward Egan, the archbishop emeritus of New York. And I was shocked. Before reading it, make sure you allow yourself some time to meltdown after.

The cardinal’s words are those of a narcissist in the extreme. He begins, “You know, I never had one of these sex abuse cases, either in Bridgeport or here (New York). Not one. The newspapers pretend as though what happened under Walter Curtis (Bishop of the Bridgeport diocese from 1961 to 1988) happened to me. Walter was a wonderful, wonderful, dear gentleman. He had gotten very old and they were sitting there. And I took care of them one by one.” Funny, I thought only a teenager could get so many “I’s” into so few sentences.

Speaking of funny, here is what the cardinal had to say about media coverage of the sex abuse crisis: “I’m not the slightest but surprised that, of course, the scandal was going to be fun in the news – not fun, but the easiest thing to write about.” Actually, I know of the writers and editors who first broke the stories – they work here at NCR – and I can assure His Eminence that there was no “fun” in it for them. Nor ease. They, like most normal human beings, were horrified by the tales of child rape, cover-up of child rape, placing child rapists repeatedly in situations where they could perpetrate their crimes again, and then trying to keep it all hush-hush lest there be scandal. The decision to publish these stories was courageous but also heart-wrenching, not least because those who researched the stories, wrote the stories and edited the stories were also those who loved the Catholic Church. If all bishops had reacted with the courage of Tom Fox, with the appropriate disgust of Tom Roberts, and with the clear understanding that cover-ups are always a bad idea like Jason Berry, the bishops would not have found themselves in this mess.

The extraordinary lack of human empathy in this man shines through when the reporter observes that one of the criticisms of Egan’s time as bishop of Bridgeport was his failure to actually meet with the victims. Egan replies, “First of all, I couldn’t apologize for something that happened when I wasn’t there. Furthermore, every one of those cases was in litigation before a court, or threatened to be, and every one was handled correctly.” The defensiveness of the reply is shocking – as if Egan things the worst thing that could happen to a person is not sex abuse but getting a less than stellar wikipedia entry. His defensiveness if only matched by his inability to recognize that a bishop is a pastor, not a lawyer. Other bishops have met with victims – Pope Benedict has met with victims. Others have apologized on behalf of the Church for crimes they did not commit but for which, as the successor of those who did, they take responsibility. Certainly, in Bridgeport, Egan did not decline to use the cathedral because it has been built by a predecessor. He did not foreswear the use of duns raised by his predecessors. Ah, but risking a moment of human empathy by actually meeting with a victim – that is too much, that belongs to his predecessor.

I used the word “victim” above, but of course, that is my word not Egan’s. Indeed, in the entire interview, there are two words that are conspicuous in their absence: victim and children. He talks about what he did. He talks about the perpetrators. He talks about the lawyers. He talks about the media. But, not a word for the victims. No recognition of the children whose lives were maimed by these crimes. If this is not moral idiocy, I do not know what is. How this man reached such a high office is beyond me and only further tarnishes the reputation of Bl. Pope John Paul II who, for all his gifts, was a singularly bad judge of character.

Egan’s interview comes at an especially inauspicious moment. His successor as Archbishop of New York, Cardinal-designate Timothy Dolan, has been out front in the USCCB’s fight against the Obama administration’s recent decision to require Catholic institutions to pay health insurance that covers abortifacients, sterilization and contraception. Dolan, rightly, argues that this is an unwarranted attack on the Church. Some Catholics perceive the decision as part of a “war on Catholics,” and while I do not go that far, certainly this is a time when the U.S. hierarchy needs to marshal its moral and intellectual credibility. But, I can think of really no insurance mandate from Obama, and no anti-immigrant legislation from a GOP-dominated legislature in Arizona or Alabama, that can do more harm to Catholics than the continued moral idiocy of Cardinal Egan. He not only undermines us with our critics, he undermines the bishops with loyal Catholics. He makes a mockery of his office. If there were a way to strip him of his red hat, it should be pursued. If there is a way to kick him out of his tony condo, it should be enacted.