The Congregation for the Doctrine of the Faith said that the book, “Just Love: A Framework for Christian Sexual Ethics,” by Sister Margaret A. Farley, was “not consistent with authentic Catholic theology,” and should not be used by Roman Catholics. 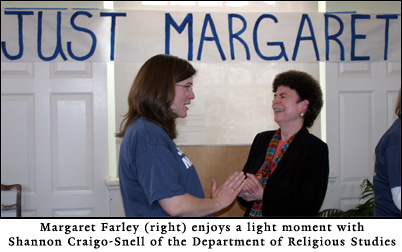 Sister Farley, a past president of the Catholic Theological Society of America and an award-winning scholar, responded in a statement: “I can only clarify that the book was not intended to be an expression of current official Catholic teaching, nor was it aimed specifically against this teaching. It is of a different genre altogether.”

The book, she said, offers “contemporary interpretations” of justice and fairness in human sexual relations, moving away from a “taboo morality” and drawing on “present-day scientific, philosophical, theological, and biblical resources.”

The formal censure comes only weeks after the same Vatican office, the Congregation for the Doctrine of the Faith, issued a stinging reprimand of the main coordinating organization of American nuns, prompting many Catholics across the country to turn out in defense of the nuns with protests, petitions and vigils.

The nuns’ organization, the Leadership Conference of Women Religious, said on Friday that its board had declared that the Vatican’s accusations were “unsubstantiated,” and that it was sending its leaders to Rome to make its case. Three bishops have been appointed by the Vatican to supervise a total overhaul of the nuns’ organization.

The censure of Sister Farley, who belongs to the Sisters of Mercy of the Americas, is the second time recently that a book by an American nun has been denounced by the church’s hierarchy. In 2011, the doctrine committee of U.S. bishops condemned “Quest for the Living God: Mapping Frontiers in the Theology of God,” by Sister Elizabeth A. Johnson, a professor of theology at Fordham University in New York.

The Vatican’s doctrinal office, led by an American, Cardinal William J. Levada, has spent more than two years reviewing Sister Farley’s book, which was published in 2006. The office first notified Sister Farley’s superior of its concerns in March 2010, and said it had opened a further investigation because a response she had sent to the Vatican in October 2010 hadn’t been “satisfactory.” It said her book had “been a cause of confusion among the faithful.”

The dean of Yale Divinity School, Harold W. Attridge, a Catholic layman, and the president of the Sisters of Mercy, Sister Patricia McDermott, issued statements in support of Sister Farley. So did 15 fellow scholars who, in a document released by the divinity school, testified to Sister Farley’s Catholic credentials and the influence she has had in the field of moral theology.

He said that the book “cannot be used as a valid expression of Catholic teaching, either in counseling and formation, or in ecumenical and interreligious dialogue.” The statement said Pope Benedict XVI had approved its contents and ordered its publication. It comes as the Vatican struggles to contain a controversy over leaked documents that have shown infighting and mismanagement in the papacy of Benedict XVI, who on Sunday concluded a three-day meeting in Milan to promote family values.

The Vatican spokesman, the Rev. Federico Lombardi, said the Vatican had not called for any sanctions against Sister Farley and was not expected to do so because she has retired from teaching. He added that it was “quite normal” that documents signed by Vatican offices are published much later than when they were signed, according to “internal bureaucratic and organizational needs.”

Sister Farley’s book finds moral and theological justifications for same-sex marriage, which aside from abortion, has become the major galvanizing political and moral issue for American bishops. The statement took Sister Farley to task for writing that same-sex marriage “can also be important in transforming the hatred, rejection, and stigmatization of gays and lesbians.” She wrote that “same-sex relationships and activities can be justified according to the same sexual ethic as heterosexual relationships and activities.”

“This opinion is not acceptable,” the Vatican statement said. It said that the Catechism of the Catholic Church says that homosexual acts are “acts of grave depravity” that are “intrinsically disordered” and “contrary to the natural law.” It said that Sister Farley’s assertion that sometimes divorce is a reasonable option for couples who have grown apart contradicted church teaching on the “indissolubility of marriage.”

The Vatican said that this assessment contradicts church teaching that “the deliberate use of the sexual faculty, for whatever reason, outside of marriage is essentially contrary to its purpose.

2 Replies to “Vatican Denounces Nun Over Book on Sexuality”