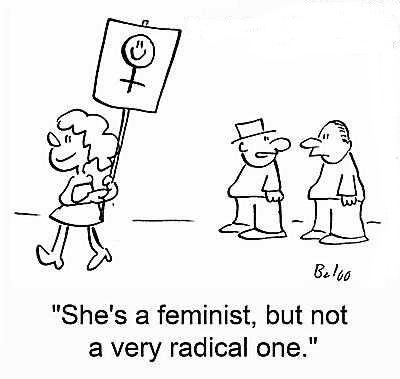 Because unlike the other nuns the Vatican has been reprimanding recently, Sister Farley is, in fact, a feminist. An ethicist who has worked on the problem of HIV/AIDS, Farley was commended in 2005 by her Yale colleagues for her contributions to feminist theory.

A nun looks on as Pope Benedict XVI leads a ceremony commemorating Christ’s gesture of humility toward his apostles on the night before he died at the Basilica of St. John Lateran in Rome April 5, 2012. Pope Benedict recently re-stated the Roman Catholic Church’s ban on women priests and warned that he would not tolerate disobedience by clerics on fundamental teachings.

Members of the Vatican hierarchy are using the word “feminist” and even “radical feminist” the way third-graders use the word “cooties.” In April, the Vatican accused the Leadership Conference of Women Religious, which represents 57,000 nuns nationwide, of allowing “radical feminist” ideas to flow, unchecked, in their communities. In 2008, after he launched an investigation against American nuns (the results of which have not yet been released), Cardinal Franc Rode told a radio interviewer that the nuns are suspected of “certain irregularities,” a “secular mentality,” and “perhaps also a certain feminist spirit.”

The authors of these rebukes never define “feminism” or “radicalism.” In their hands, these words, which can carry legitimate intellectual meanings, appear to signify something like: “Yucky women who fail to heed our instructions and, anyway, don’t meet our standards of womanhood.” In other words, the sisters aren’t behaving as girls should.

Their casual use of these terms convinces me that the cardinals, in their vast experience, have never actually met a radical feminist theologian. Such creatures do exist, although American religious orders are hardly their breeding ground. What the Vatican hierarchy sees as a “radical feminist” is a woman who dares to believe that she’s equal to a man.

Lisa Isherwood is a real-life radical feminist theologian. She is editor of the journal Feminist Theology and a professor at Winchester University in England. She believes that the men at the Vatican are using the term “radical feminist” as a right-wing scare tactic, for it evokes other enemies far more dangerous than nuns. Their thinking goes like this, she says: “We hear the word radical Islam, and everyone panics, so let’s chuck that at them.”

The mother of radical feminist theology was the late Mary Daly, who started life as a committed Roman Catholic and spent most of her career teaching at Boston College, a Catholic institution.

She was driven to critique her beloved church after she sat in on sessions of the Second Vatican Council in Rome and felt that women had no meaningful part in the proceedings.She was, she wrote later, appalled by “the contrast between the arrogant bearing and colorful attire of the ‘princes of the church,’ ” she wrote later, “and the humble, self-deprecating manner and somber clothing of the very few women. … Watching the veiled nuns shuffle to the altar rail to receive Holy Communion from the hands of a priest was like observing a string of lowly ants at some bizarre picnic.”

In her breakthrough 1974 book, “Beyond God the Father,” Daly wrote, “If God is male, then the male is God. The divine patriarch castrates women as long a he is allowed to live on in the human imagination.” Now that’s a radical feminist for you. Daly’s work gave voice to generations of feminist scholars.

Isherwood, for one, wears the labels “feminist” and “radical” with pride. She is a Catholic — “in as far as anyone’s trying to hang in there” – she says.

She deeply loves her church and believes that at its core, Roman Catholicism has a radical feminist message. “The church should be radical. It should be saying, ‘More inclusion, more equality.’ An abundance of life is a fundamental Catholic value. The idea of ordination of women and so on is just one very small, very significant point. Radical feminism would want the church to be more proactive in terms of working for a life of abundance for the marginalized.”