The Catholic Church suspends Anthony Musaala indefinitely for shining a light on what he calls an open secret: Sex abuse is a problem in Africa too.

By Robyn Dixon
He is a celebrity across eastern and central Africa, a gospel music star known to many as the “Dancing Priest.” But for years he also was a keeper of painful secrets — his own and many others’. 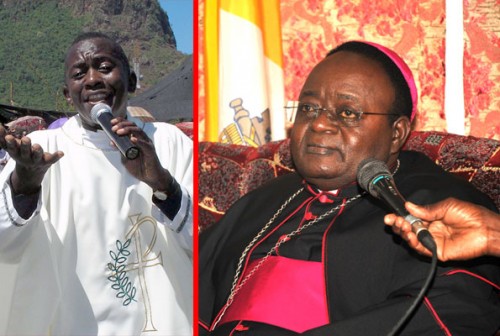 In going public, Anthony Musaala has forced the Roman Catholic Church in Uganda to confront a problem it had insisted didn’t exist. And he may stir a debate far beyond Africa’s most Catholic of countries.

The Ugandan priest has been suspended indefinitely by the archbishop of Kampala for exposing what he calls an open secret: Sex abuse in the Catholic Church is a problem in Africa as well as in Western Europe and North America.

The African Catholic Church is fast-growing, pious and traditional. As the church elsewhere forks out billions of dollars to compensate the child sex abuse victims of priests, few African Catholics have questioned the assumption, voiced recently by Ghanaian Cardinal Peter Turkson, that the African church is purer than its counterpart in the West, which is regarded as secular and permissive.

It’s not more pure, says Musaala. He says he has the evidence to prove it.

“The Vatican turns a blind eye because it doesn’t want to be embarrassed about this blooming church. But I think it’s time we had the truth,” Musaala says.

In March, he wrote to the archbishop of Kampala, Cyprian Lwanga, about priests who fathered children, kept secret wives or abused girls or boys, and called for a debate on marriage for priests.

One of the cases of abuse he cited involved himself. He was one of numerous boys sexually abused at 16, he says, by Catholic brothers at one of Uganda’s best boarding schools. He also alleged several other cases of child sex abuse in his letter.

“Wherever you go, people know about this. It’s like an open secret. People know. Nothing is ever done,” said Musaala in an interview.

The letter was leaked to the news media. And in response, Lwanga suspended Musaala, saying his statements stirred up contempt for the Catholic Church and damaged the morale of believers.

Later in the month, Lwanga acknowledged that abuses had taken place, apologized to victims and set up an internal inquiry. But he did not backtrack on Musaala’s unpaid suspension.

Lwanga’s limited concession came after South African Cardinal Wilfrid Napier of Durban said in a BBC interview that he had dealt with cases of child sex abuse, which were handled by the church internally, and not referred to the police. He suggested that the perpetrators weren’t criminals and needed counseling.

“Some of the priests went, according to the wisdom of the time … for treatment, came back and have been under — what we call it — personal surveillance and have functioned quite normally ever since,” he said. Napier later apologized, but also accused the BBC of twisting his words in the radio interview.

For African Catholics, the revelations of child sex abuse in Western churches are shocking enough. But the idea that African priests might be sexually abusing boys had been unthinkable. Paradoxically, many believers in Africa are aware that some priests break their vows and father children, but talking about it is taboo.

Catholicism is the most popular religion in Uganda. In the center of the hilly capital, the faithful gather daily at Christ the King Church, and so many touch the foot of a large statue of Christ that its shiny toes gleam in the sunlight.

Parishioner Stephen Sanya, 68, a retired postal worker, said it was common knowledge that some Ugandan priests have sex, or, as he put it, “serve nature” instead of God.

“There are cases where [priests] indulge in these things. I have seen and heard of cases,” said Sanya, dawdling in the warm afternoon sun after dropping in to pray. “It’s scandalizing. I suggest that if a priest is not ready to be celibate, he can resign and get married. But I haven’t seen that happening in Uganda. Here, it’s secret.”

Anyone who calls for these embarrassing secrets to be brought to light, placing the church in an awkward position, doesn’t get much sympathy from Uganda’s conservative churchgoers, even if the allegations are true. To traditionalists, what Musaala is doing is un-African.

But then, Musaala is the kind of man who doesn’t exactly fit in, and perhaps it took an outsider like him to toss out the first allegations.

Educated in Britain for many years, he’s a creature of two worlds, not completely at home in either. His clipped British accent and his quaint turn of phrase mark him as an outsider in his home country. His attitudes, and his soaring sense of individual freedom also are imports.