The Vatican is being confronted publicly for the first time over the sexual abuse of children by clergy, at a UN hearing in Geneva.

Officials faced a barrage of hard questions such as why would they not release full data and what were they doing to prevent future abuse.

Archbishop Silvano Tomasi said such crimes could “never be justified” and every child should be “inviolable”.

A fellow official said “things need to be done differently”. 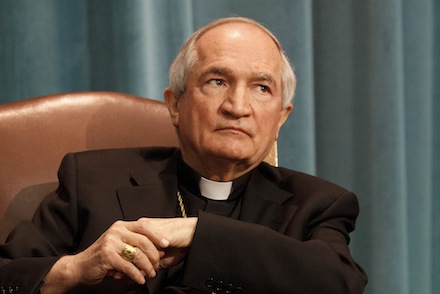 The Vatican earlier refused a request from the UN’s Committee on the Rights of the Child (CRC) for data on abuse, and was accused of responding inadequately to abuse allegations.

The Vatican came to Geneva expecting a rough ride and so far it is getting one, the BBC’s Imogen Foulkes reports.

Victims say they hope the hearing, which is being broadcast live, will prompt the Church to end its “secrecy”.

Pope Francis announced last month that a Vatican commission would be set up to fight sexual abuse of children in the Church.

The Holy See is a signatory to the UN Convention on the Rights of the Child, a legally binding instrument which commits it to protecting and nurturing the most vulnerable in society.

It ratified the convention in 1990 but after an implementation report in 1994 it did not submit any progress reports until 2012, following revelations of child sex abuse in Europe and beyond.

Members of the CRC asked about the Church’s practice of moving priests suspected of abuse and allegations that it had concealed such abuse.

Why, it was asked, did the Vatican continue to describe such abuse as an offence against morals rather than a crime against children?

“Does the Holy See believe that paedophilia is something that can be successfully overcome?” was one question.

How, the Vatican was asked, did it go about training priests for work with children? What oversight was in place for Catholic institutions such as schools?

“The best way to prevent new offences is to reveal old ones,” one of the questioners said.

Archbishop Tomasi, who is the Vatican’s envoy to the UN, said that it was important to note that priests were “not functionaries of the Vatican but citizens of their countries and fall under the jurisdiction of their own countries”.

Bishop Charles Scicluna, the Vatican’s former chief prosecutor of clerical sexual abuse, insisted it was “not the policy of the Holy See to encourage cover-ups”.

But he added: “The Holy See gets it that there are things that need to be done differently.”

Archbishop Tomasi said no profession was immune from producing sex offenders but the fact that there were cases in the Church was very damning: “Abusers are found among members of the world’s most respected professions, most regrettably including members of the clergy and other church personnel.

“This fact is particularly serious since these persons are in positions of great trust and they are called to levels of service that are to promote and protect all elements of the human person, including physical, emotional and spiritual health.”

While Thursday’s questions were numerous and far-ranging, they were asked in blocs, with the Vatican delegation given time to retire to prepare its answers.

Observers vented frustration at the lack of specific answers.

“Holy See: ‘We get it’ in UN review on child sexual abuse Catholic Church,” wrote the children’s rights watchdog CRIN in a tweet. “Do you? Why then don’t you make statistics public?”

Barbara Blaine, president of a group representing US victims of abuse by priests, told BBC News that the hearing had brought “hope to victims across the globe”.

But it would also stand, she said, as a “record of how the Church officials refused to answer the questions, how they claim to be open and transparent, and yet they don’t live up to that ideal”.

The hearing in Geneva was welcomed by Teodoro Pulvirenti, an Italian who was abused by a priest as a teenager in Sicily.

Mr Pulvirenti, who now lives in the US, told the Associated Press it was time for the Vatican to end its “secrecy” over a global sex abuse scandal.