Curious that they have to “follow the law” when it involves paying a priest rapist, but not paying the victims of the priest rapist.

The Diocese of Winona has offered a public explanation of why it continues to pay pension benefits to a defrocked pedophile priest, a week after the revelation was made public by a law firm suing the diocese. 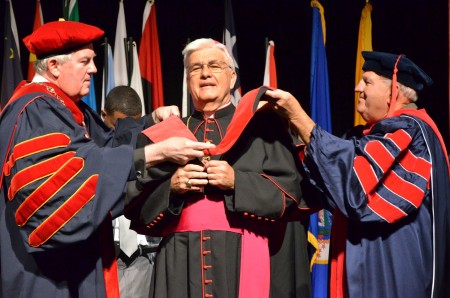 “Recently, there has been criticism of the Diocese of Winona for providing former priest, Thomas Adamson, with his pension benefits,” reads a statement released first to parishioners, then to the public.

“The provision of Mr. Adamson’s benefit is not discretionary or voluntary, it is required by law,” the statement continues.

Adamson is paid out of the diocesan Priest Pension Fund, created to provide retirement income and health-care benefits to retired diocesan clergy. A priest who has served the diocese and made contributions to the retirement fund for 10 years is vested in the plan, and his right to be paid benefits from the plan is protected by state and federal law.

According to the diocese: “The Diocese cannot elect to withhold vested pension benefits from employees even when the employee has committed misconduct. The Diocese of Winona strictly adheres to the legal obligations associated with the pension plan.”

Adamson, ordained a priest in 1958, continued in active ministry until 1985, after allegations became public that he had sexually abused boys in parishes where he had been assigned. In 2009 he was laicized — officially removed from the Roman Catholic priesthood — by Pope Benedict XVI on the recommendation of Bishop Bernard Harrington.

In a sworn deposition made public earlier this month, Adamson admitted to having sexual contact with at least a dozen boys over two decades of ministry, stopping only when one of his victims came forward publicly in 1984.

While Adamson never faced criminal abuse charges — the statute of limitations had expired — in addition to lawsuits currently before the court, he has been accused of sexual abuse in three civil suits settled out of court, and a fourth suit brought against the Diocese of Winona and the Archdiocese of St. Paul and Minneapolis was decided in favor of the complainant.

Still, “Thomas Adamson’s laicization does not divest him from receiving his pension benefits,” the diocese states.

“The continued payment of Thomas Adamson’s pension benefits should not be viewed in any fashion as condoning or supporting the horrific crimes he has perpetrated upon children.”