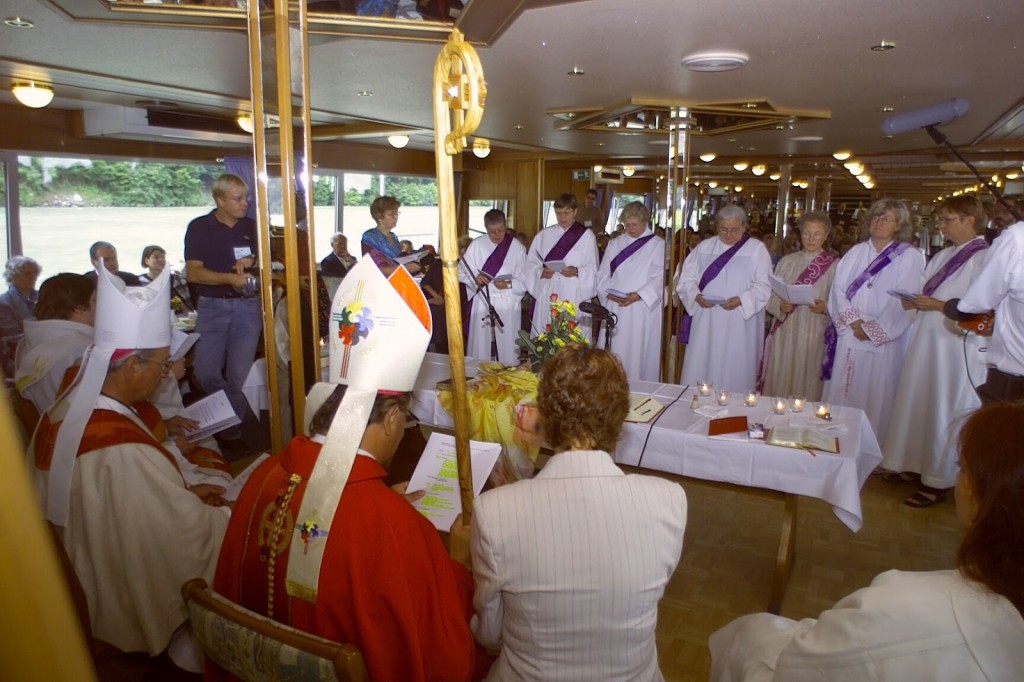 November 1 was All Saints Day, a day on the church calendar when we pay homage to exceptional followers of Christ. The day before — October 31 — marked the 500th anniversary of Martin Luther’s declaration of opposition to what he considered a corrupt papacy that tolerated the selling of indulgences.

When he got wind of what Luther was doing, the Pope excommunicated him. But what a difference a few centuries makes. I can remember a time not so long ago when we Catholics called the Protestant Reformation the Protestant Revolt.

But now, the Vatican has issued a commemorative stamp depicting Luther kneeling at the foot of the cross. The stamp is part of an effort encouraging rapprochement between Catholics and Lutherans.

Perhaps this is a good day to remember that the church does rethink issues, even if it often takes a very long time to do so.

I’m not sure it will come in my lifetime, but at some point, the Vatican might even issue a stamp marking the ordination of the first woman priest.

That would certainly be a departure from the way the institutional church currently treats women priests. If a woman dares to be ordained to the Catholic priesthood, the church declares her to be excommunicated.

Excommunication is the worst thing that the church can do to its members. It bans the individual from receiving all sacraments and from the Catholic community.

So you would think that the ordination of women priests was either so morally sinful or so damaging to the church, that this type of punishment was warranted.

But it is difficult to view Catholic women who pursue a vocation to the priesthood as reprobates out to damage the church.

Indeed, they’re not even outliers among Catholic faithful. Overall, about six in ten U.S. Catholics support women’s ordination. Even among Catholics who attend Mass at least weekly, 45 percent believe that women should have access to the priesthood.

In 1994, Pope John Paul II claimed that women should be excluded because Christ only called twelve men to be His apostles, and the church has always done it this way. That seems like an awfully lame excuse for centuries of misogyny. After all, the apostles all were Jews, too. And it would have been difficult for Jesus, living in that culture and at that point in Jewish history, to have elevated women to leadership positions, although He certainly paid far more attention to women than was customary at the time.

At a time when women have made great strides in the workplace, proving themselves just as capable to head businesses, excel in the arts and sciences, and lead countries, when Anglican and Episcopal churches have ordained women to serve both as priests and bishops, it appears that the Catholic hierarchy is fighting a battle that becomes less and less intellectually defensible.

The Association of Roman Catholic Women Priests claims that since a validly ordained Catholic bishop ordained the first women bishops, the ordinations that follow are all valid and within the Catholic apostolic line of succession. They also make clear that they see themselves as reformers within their “beloved church,” not antagonists. Both Women Priests and the Women’s Ordination Conference offer a reasoned and respectful rebuttal to the church’s arguments.

But even if we assume that the institutional church is absolutely right about its embrace of an all-male priesthood, why does it feel so threatened by those few brave women who follow their consciences and choose to be women priests?

They know they will not get the chance to serve in any Catholic parishes or hospitals. They accept lives with little economic or professional security, and none of the perks male priests receive. But surely, they do not threaten the viability of the church.

And tell me this: Isn’t pedophilia a real threat to the institutional church? After all, we are talking about millions of Catholics losing faith in their pastors and bishops, and dioceses saddled with multi-million-dollar lawsuits. Parishes have been closed due to the financial burden of this abuse.

Yet there is no similar papal decree that states that any priest found guilty of sexually molesting minors should be automatically excommunicated.

Indeed it appears that many priest molesters get off easy. In 2014, the Vatican reported that over ten years, it had defrocked 848 priests, and given lighter punishments to 2572 others. The Vatican did not report how many priests it reported to law enforcement, or what happened to them. (In defending how it treated errant priests, the Vatican official had the temerity to state that “the Holy See condemns torture, that includes torture inflicted on the unborn.”)

Interestingly, the decree excommunicating women priests came out in 2007, the same year that the Los Angeles archdiocese paid $660 million in damages to resolve lawsuits filed by abuse victims.

It was just three years after a study commissioned by U.S. bishops revealed that more than 4,000 priests and deacons had been the targets of more than 10,000 complaints of abuse.

Or course, the greater irony is that women who seek ordination do so not to do evil, but to do good. They are not predators. They want to give more to the church, inspired by their faith to live out the gospels as fully as possible. They have not cost the U.S. church the $2.5 billion in damages caused by abusive priests.

I’m not aware of women priests storming parish churches, demanding to say Mass. They are not breaking into rectories, asking for room and board. They are attending schools of theology, but they have not attempted to secure for themselves the benefits that their male colleagues – seminarians – take for granted.

Aspiring priest Lisa Cathelyn must pay $50,000 in tuition to earn her graduate degree in theology from the Jesuit School of Theology at Santa Clara in Berkeley, CA. She is on Medicaid because she can’t afford to buy the school’s health insurance. She’s living in a group home to save on rent. She faces an uncertain future, but one in which service to others is her lodestar.

It is the Jesuits who take a vow of poverty who live in relative comfort, while Polovick and other women who study for the priesthood do not need the vow: They are living the real thing.